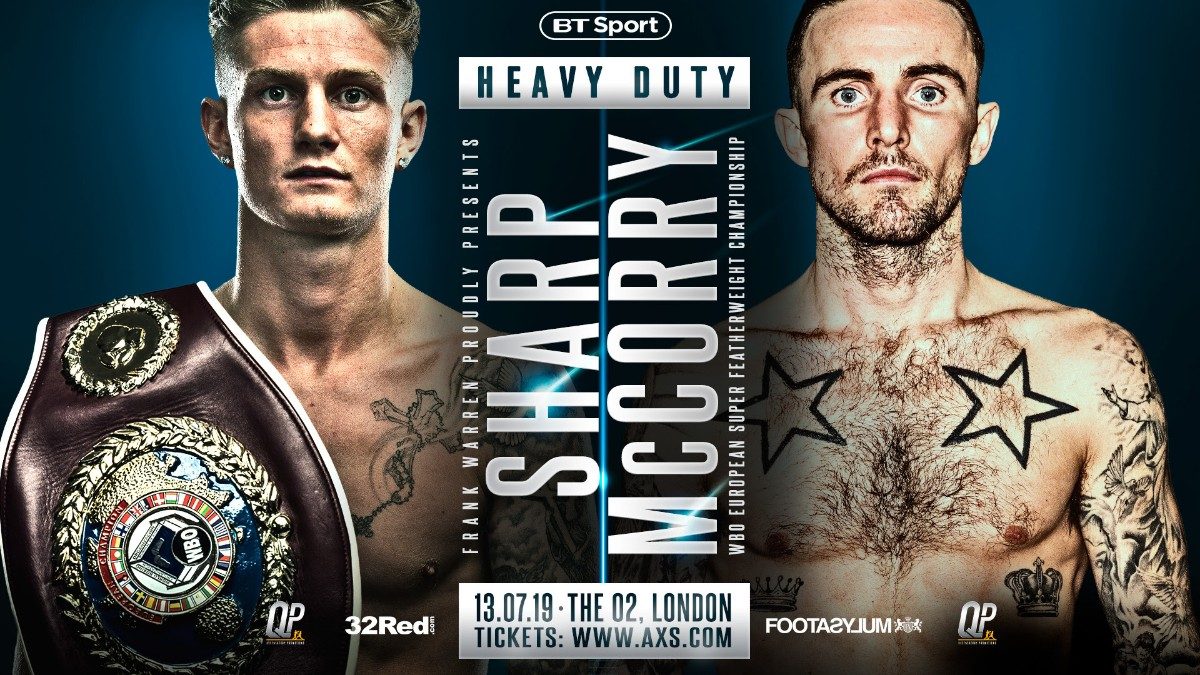 TWO SUPER FEATHERWEIGHT rivals slugging it out for the Commonwealth title was not enough to entice Archie Sharp to sit in front of the telly for the night and carry out a scouting mission.

In fairness, the 24-year-old from Welling had already beaten one the combatants in Lyon Woodstock, but assessing the merits of Zelfa Barrett clearly didn’t appeal either.

Sharp insists he has got his own matters to attend to when he takes his place on the undercard of the mammoth ‘Heavy Duty’ show at the o2 Arena next Saturday (July 13) when he defends the WBO European title – he won from Woodstock – against the tough Scot Jordan McCorry, who challenged for the British title against Sam Bowen earlier this year.

Up in Leeds a few weeks back, Barrett placed himself firmly back on the super featherweight map with a slick and stylish display to outfox the Leicester man.

Sharp believes it was he who provided the blueprint for undoing the defences of Woodstock and Barrett simply followed his recipe.

“On the night of the fight I was out with the kids,” revealed Sharp. “I didn’t need to watch the fight because I’ve got Jordan McCorry to concentrate on.

“I have heard – a lot of people rang me on the night – that Zelfa Barrett carried out a masterclass and outboxed Lyon Woodstock. So I have heard that.

“I did see the interview with him saying that he boxed the best Lyon Woodstock. I don’t know how he can say that when I beat the man, the reigning champion, in his back yard when he was unbeaten and had never been on the floor.

“Listen, in every round he had against Zelfa Barrett the other week he would have been thinking ‘Archie Sharp did this to me’ and it was exactly what Barrett did, got on the back foot and outboxed him.”

While happy to heap praise on the performance of Manchester man Barrett, Sharp contends this his opposition was ‘damaged goods’.

“Of course he was damaged goods, but you can’t take anything away from the man because he won the Commonwealth title and I am told he won it convincingly.

“But when he is doing interviews saying Archie Sharp never did no damage to him. I disagree there.”

A potential match-up between Sharp and Barrett will doubtless be considered, but Sharp goes along with the train of thought that the fleet-footed style possessed by both fighters might not make it the most fan-friendly encounter.

More suitable for either man, Sharp considered, would be the more bullish British champion Bowen.

“I do understand, styles make fights and I totally agree with that. Our styles could clash and there could be a bit of dancing going on.

“Everyone who comes forward is going to get hit and it is just about taking it to world level. I know I can do it but I have just got to go and prove it.”

Read: Rap & UFC Megastars To Attend Khan vs Dib Fight
Read: Deontay Wilder Says He’d Very Much Like To Fight Andy Ruiz; But Would He Beat Him?
Follow @boxingnews24