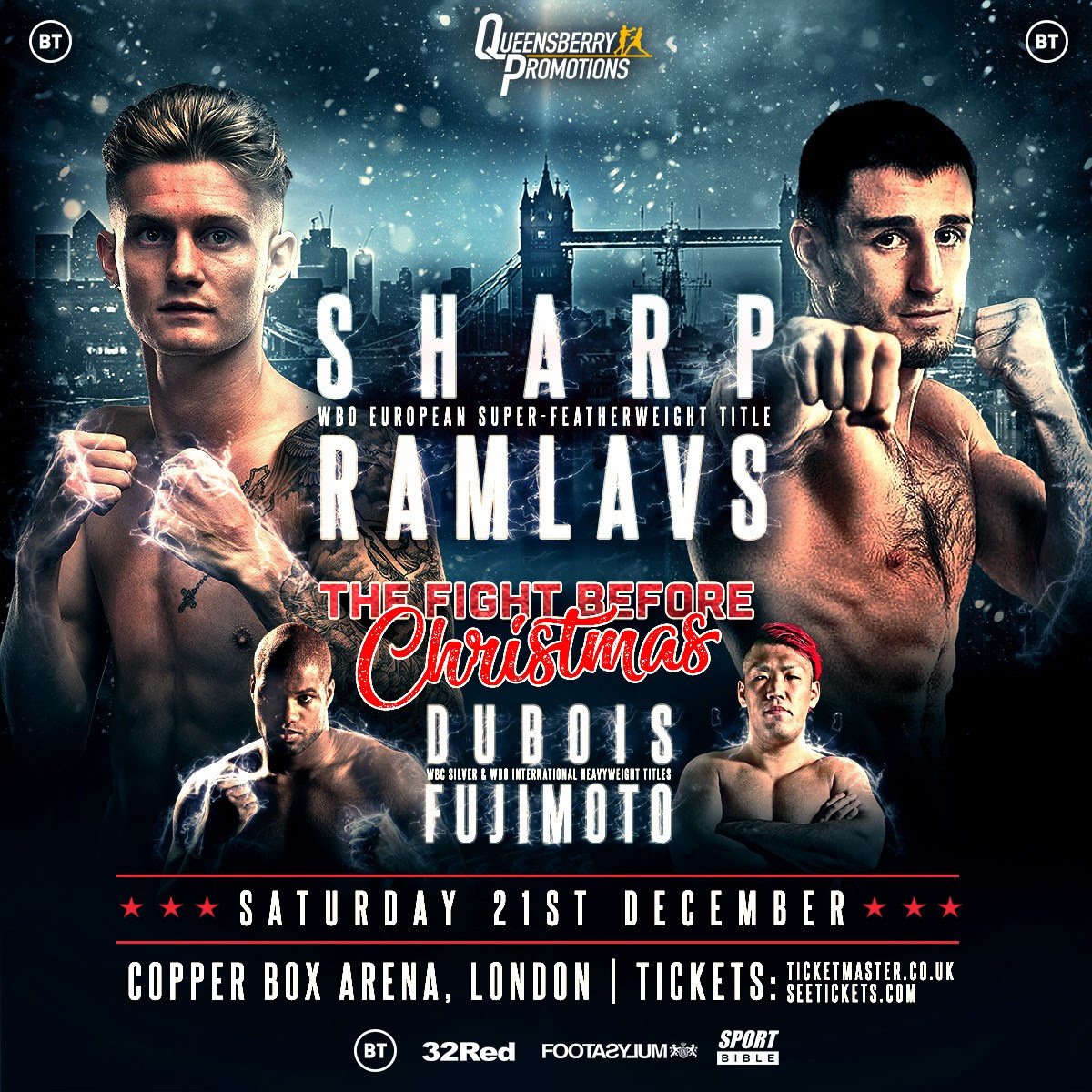 ARCHIE SHARP MAKES a third defence of his WBO European super featherweight title when he takes on the unbeaten Artjoms Ramlavs at the Copper Box Arena on December 21.

In what is a strong addition to an already stellar BT Sport card – ‘Sharpshooter’ Sharp will be looking to solidify his position at the forefront of the 130-pound brigade. It is one of five title fights currently scheduled on the bumper bill that also includes the heavyweight collision between Daniel Dubois and Kyotaro Fujimoto for the WBO International and WBC Silver titles, Liam Williams going up against the American Alantez Fox for the right to fight for the WBO world middleweight title, Sunny Edwards and Marcel Braithwaite battling it out for the British super flyweight title, as well as the return to ring duties of Tommy Fury and title action for super welterweight contender Troy Williamson.

Sharp, 17-0 (9KOs) is on a roll since parting the previously unbeaten champion Lyon Woodstock from his belt in Leicester in October of last year. Injury prevented immediate title progression before he got back in the swing with a second round stoppage of Sergio Gonzalez at Wembley in April and he proceeded to make a first defence against the tough Scot Jordan McCorry at the o2 Arena in July, where he recorded a convincing points victory.

His most recent assignment came at the Royal Albert Hall in September, where he again defended his WBO strap, this time against the unpredictable Irishman Declan Geraghty. The Dubliner presented early problems to the Welling man before a peach of a punch dispatched by the 24-year-old spectacularly ended Geraghty’s night in the fourth round.

It was an emphatic statement delivered by Sharp, who is jostling for position in the super featherweight pecking order along with Commonwealth champion Zelfa Barrett and former British ruler Sam Bowen, who recently dropped a decision to Belfast man Anthony Cacace.

Ramlavs from Riga will enter into unfamiliar territory on the night of ‘The Fight Before Christmas’ at the Copper Box.

Known as ‘Supersonic’, the 30-year-old has not previously fought outside his native Latvia in a career that has spanned 11 professional fights, with six of his wins coming via KO.

The 5ft 7″ southpaw and the champion Sharp do have one opponent in common in the Nicaraguan Gonzalez, who Ramlavs fought in 2018 and recorded a points victory.

“He is a southpaw, 11-0 with six stoppages and I see he had a bit of amateur pedigree,” said Sharp on his forthcoming mission. “So we have got another unbeaten fighter to come and take me on and he is a little bit shorter than Declan (last opponent, Geraghty) and that will probably work a little bit in my favour.

“I think what is happening is he is tough and game, but I don’t think his ability is up there with the other boys I have fought and he will come to work and have a right go.

“Facing an unbeaten fighter brings another dynamic because every time he has showed up before he has won. He’s now got a shot at the WBO European title so we will see how he turns up.

“I’ve just got to make sure I am in tip-top shape and able to adapt to whatever he brings on December 21. It is another lively one and I think they are all going to be that now.”