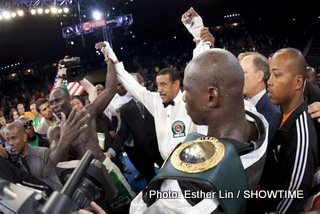 “I’m happy to be back in the ring and fighting in Texas for the first time,” said Tarver, who returns to action for the first time since November, 2013. “A win over Johnathon Banks is just what I need to get my shot at the heavyweight title. To come back to boxing on the same day that my son, Antonio Jr. makes his pro-debut; that’s even more rewarding.”

“Tarver is a crafty veteran who deserves respect for what he’s done in the sport,” said Banks. “But his time has passed and I’ll remind him of that on September 29.”

“This is a great matchup between two veteran heavyweights who can show a lot of the younger kids how it’s done,” said Oscar De La Hoya, president and founder of Golden Boy Promotions. “I’m really looking forward to this one and as far as picking a winner, it’s a toss-up.”

One of the premier light heavyweights of his era, Antonio Tarver (30-6, 21 KOs) beat the likes of Roy Jones Jr., Glen Johnson, Montell Griffin and Eric Harding en route to a world title and a place on the pound-for-pound list. Now reinventing himself as a heavyweight contender, Tampa, Florida’s “Magic Man” is unbeaten in his last four bouts, most recently stopping Mike Sheppard in four rounds on November 26, 2013. On September 29, he looks to move closer to a world title shot.

A talented heavyweight veteran, Detroit’s Johnathon Banks (29-2-1, 19 KOs) performs double duty in the division as a respected contender and the trainer of world champion Wladimir Klitschko. When he puts the gloves on September 29, the 32-year-old Banks plans on showing the form that has led him to knockout victories over the likes of Seth Mitchell and Travis Walker.

Tarver vs. Banks, a 10-round heavyweight bout is presented by Golden Boy Promotions and Leija*Battah Promotions in association with K2 Promotions and is sponsored by Corona Extra and O’Reilly AutoParts. The FOX Sports 1 and FOX Deportes broadcast airs live at 10:00 p.m. ET/9:00 p.m. CT/7:00 p.m. PT.