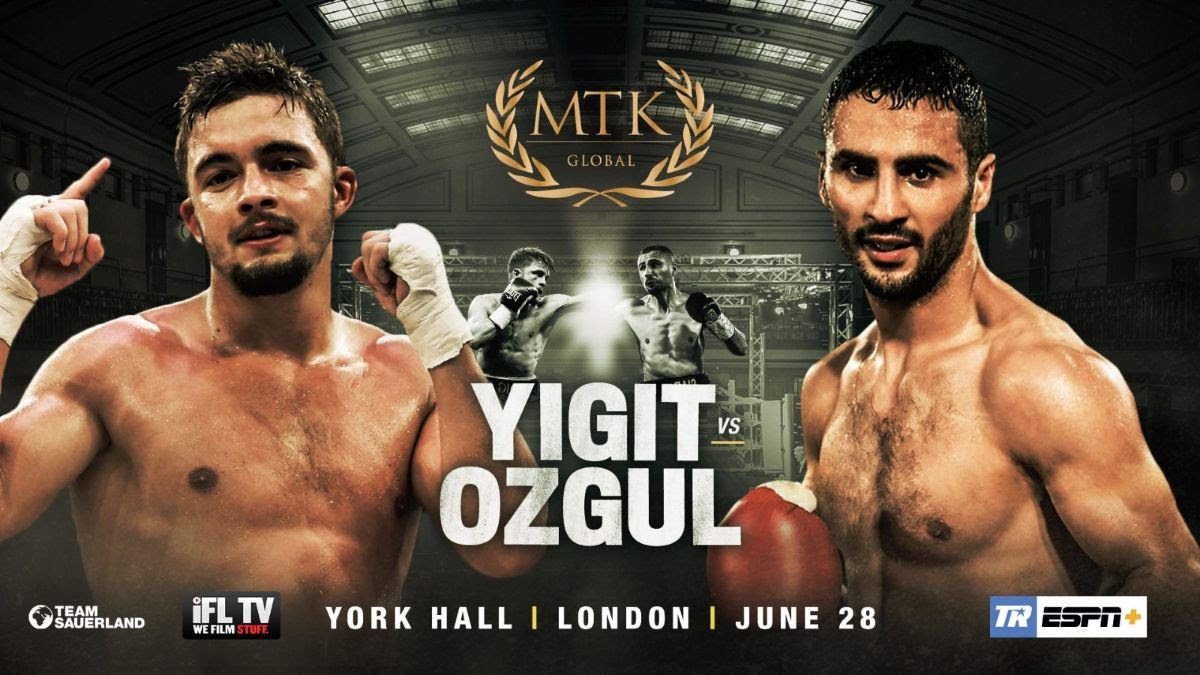 The former EBU Super Lightweight king is back following a fifth-round stoppage win over Sandro Hernandez on May 4 in Frankfurt, and is looking forward to facing the Turkish-born Ozgul at the iconic British boxing venue.

“Siar is just the opponent I need to test my skill and brains in the ring,” said the 27 year-old southpaw. “He’s rough, making sure to bring the fight to you, and he’s been in the ring and gone the distance with former World Champion Viktor Postol so I’m not expecting an easy fight.

“I’m really looking forward to fighting at York Hall. I’ve watched my friends fight there before and I was so jealous of them because it’s a legendary venue with a great atmosphere. It’s almost as if it was built for boxing.”

Yigit’s eight-round super lightweight clash with Ozgul is part of an ESPN+ broadcast that will also feature Ohara Davies vs. Miguel Vazquez, Chantelle Cameron vs. Anisha Basheel in a WBC World title eliminator and Ryan Walsh vs. Lewis Paulin for the British Featherweight crown.

Having impressed in his World Boxing Super Series Quarter-Final clash with Ivan Baranchyk in New Orleans, Yigit is relishing the opportunity to showcase his skills in front of an American audience again.

“The US audience has shown me lots of love following my World title fight with Ivan Baranchyk in the World Boxing Super Series,” he says. “Even though it didn’t go my way, they made it clear they wanted to see me in the ring again, and I will make sure to show my appreciation on fight night.

“I will be preparing for this fight in Stockholm with Joel Grandel at Hammarby Boxing Club. The Hammarby sports organisation together with their soccer, ice hockey club and fans has shown me great support and I’m honoured to be one of them. I’ve also got Erik Skoglund on my team and he will be helping me become the best I can on fight night.”

Said promoter Nisse Sauerland: “We’re delighted to be working with MTK. This is a great fight for Anthony and great match up for the fans. It’s going to be an explosive night at London’s famous York Hall, and we’re excited that American fans are going to get the opportunity to see Anthony in action on ESPN+.”

The slick southpaw continues his charge back into World title contention following a brave attempt at the IBF belt versus Ivan Baranchyk in their World Boxing Super Series Quarter-Final on October 27 in New Orleans.

Yigit has since returned with a unanimous points win over Mohammed Khalladi and a stoppage victory against Sandro Hernandez, and says he ‘can’t wait to steal the show’ as he takes on the Hackney-based Turk over eight-rounds.

“I can’t wait to steal the show,” said Yigit. “I fought for a world title and it was my first loss, but I’m not ashamed of that. Since then I’ve been working hard to fix whatever mistakes I’ve made in the ring to make sure they don’t happen again.

“I’ve bounced back and had two victories since then but I’m not where I was, so slowly we are building up again to earn my place back at the top.

“It’s an interesting fight. I knew of Ozgul when I used to train in London and I actually saw one of his fights. I always said I would love to fight at York Hall, and I’m excited I now I have the chance to do so.”

“When I was offered this fight I was really excited,” says Ozgul, who goes in search of his sixteenth professional win. “This is an interesting fight for me and I’m very confident in this fight. I’ve had a good training camp and I’m ready.”

Yigit-Ozgul is part of a blockbuster bill at the MTK Fight Night, which also features Ohara Davies vs. Miguel Vazquez and Ryan Walsh vs. Lewis Paulin for the British Featherweight crown, broadcast live on ESPN+ in America.

Swedish fight fans can watch all the action from York Hall live on iFL TV.