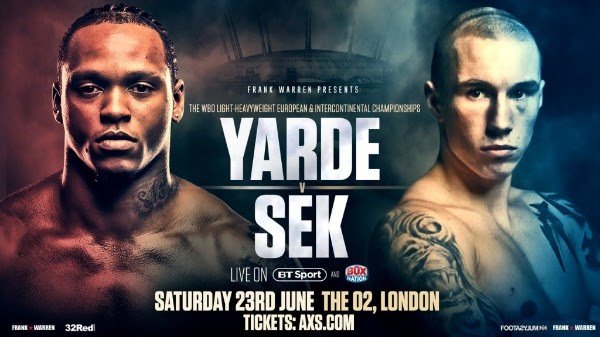 ANTHONY YARDE is back in title action when he faces Dariusz Sek at London’s o2 on June 23.

Unbeaten Yarde has been in a hurry winning 14 of his 15 ﬁghts inside the distance during a short, but explosive career.

Yarde is already ranked number two by the WBO but faces a long night when he defends the WBO Intercontinental Light Heavyweight title against his Polish rival, live on BT Sport.

Sek, 31, has lost just three times in 33 contests and never been stopped in a nine year professional career.

It is the sort of experience 26-year-old Yarde needs according to his trainer Tunde Ajayi, who hopes this test will give his man valuable rounds.

Ajayi said: “100 per-cent, this is the type of ﬁght that Anthony needs at this stage of his career.

“Sek is a credible opponent and lost a close ﬁght to Robin Krasniqi who won the European title earlier this year.

“Hopefully we will get some rounds, but we don’t know whether we will the way Anthony has been performing.

“People say Anthony needs to step up, but this is one. Hosea Burton is mentioned as an opponent for Anthony, but Sek is ranked higher than Hosea on Boxrec.

“I know people want to see that jump, but there is no rush. Angelo Dundee said the same thing about not rushing Sugar Ray Leonard and that has stuck with me.”

Sek is the ﬁrst southpaw that Yarde has faced in his amateur or professional career.

Tunde added: “I have been asking for a southpaw for a few months and this ticks that box before we move on and eventually ﬁght for and win a world title.”