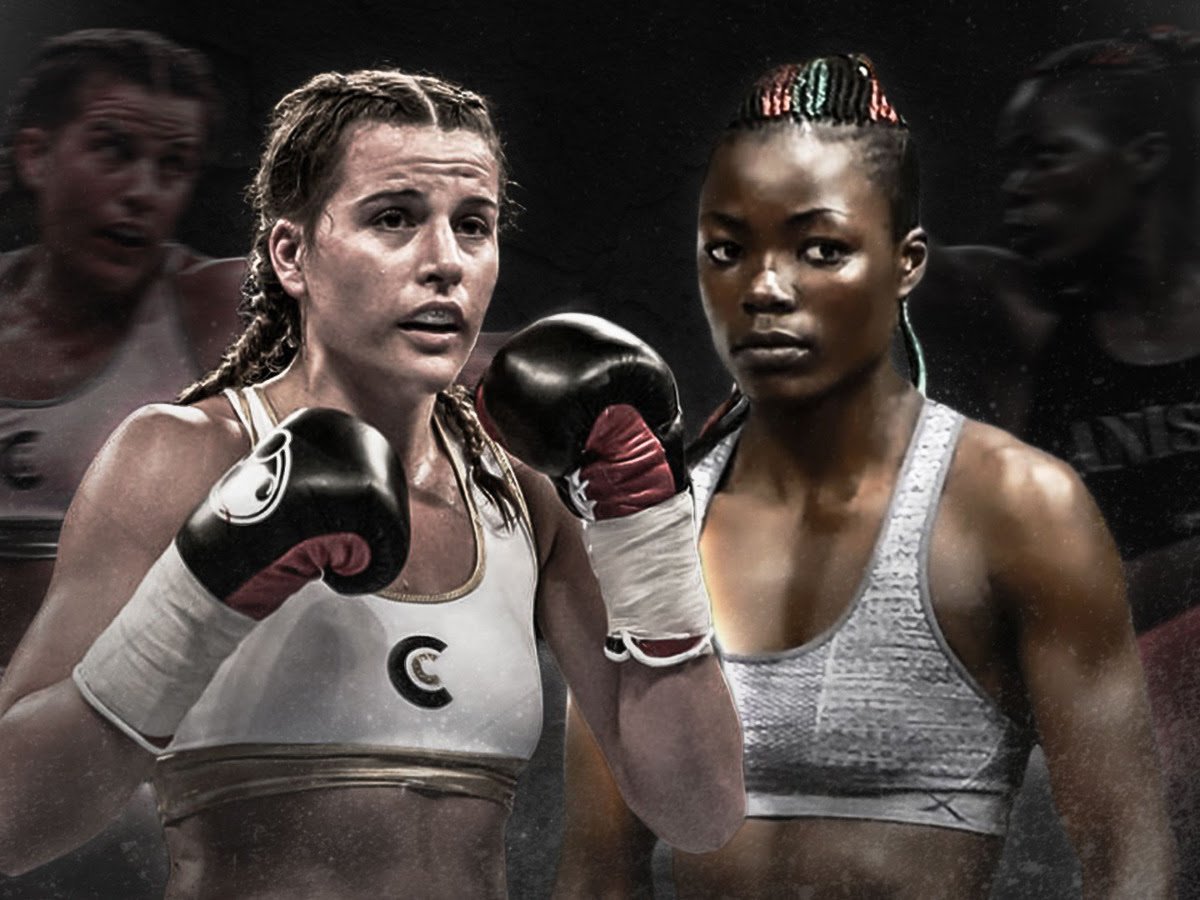 Chantelle Cameron is eager to get her hands on bitter rival Anisha Basheel when the pair clash in Saturday’s WBC world title eliminator.

With the winner set to challenger Katie Taylor for all four lightweight titles, tensions ran high at the final press conference for the #MTKFightNight in Brentwood – live on ESPN+ in association with Top Rank and on iFL TV.

Huge-hitting Malawian Basheel, who is on a run of eight straight knockouts, described Cameron (10-0, 7 KOs) as ‘dust to sweep away on the path’ – but the Northampton star is adamant a nasty shock awaits her visitor.

Ahead of a mouth-watering 10-rounder, Cameron said: “She has underestimated me and is being complacent. Clearly, all she’s got is power and that’s all her game plan is.

“She’s already focused on the Katie Taylor fight and is obviously overlooking me. Well, I’ve got a massive treat for her on Saturday night!

“Her threats were a joke. I got the impression she was being told what to say. They’re here to hype things up and put on a show but I’m simply here to fight.

“She looks tall and skinny. I’m not bothered about her physicality – I’ve taken a look at her and all I thought was: ‘I’m going to deal with you on Saturday.’

“A serious beating is waiting for her in that ring when the first bell goes.”

No love lost between Chantelle Cameron and Anisha Basheel

There was no love lost between Chantelle Cameron and Anisha Basheel as the duo exchanged heated words during Thursday’s final press conference ahead of Saturday’s huge #MTKFightNight event at the Brentwood Centre.

Unbeaten Cameron (10-0, 7 KOs) faces Basheel (8-5, 8 KOs) in a final eliminator for the WBC world title live on ESPN+ in association with Top Rank, and also live on iFL TV, with the WBC Silver title also on the line.

There is a fantastic Southern Area welterweight title fight as Shaquille Day (12-0, 2 KOs) goes up against Louis Adolphe (10-1, 1 KO), with the mind games continuing as Adolphe refused to turn up at the press conference.

Cameron: “Basheel claims she’ll bully me, well physically nobody has ever bullied me, so that won’t happen. I could box her head off for 10 rounds, but I can also go in there and have a tear up too and I’d still beat her.

“It’s going to be a very good fight and I can’t wait to be in that ring. She thinks I’m a bridge for bigger things but she’s wrong. I’ve got the momentum going now and my training camp has gone really well.

“I’ve been pushed hard to my limits and I’m really confident for this fight. She’s a big puncher but she’s got to feel my shots as well and when she does she’ll realise she’s in trouble.”

Basheel: “I am the hardest puncher in the division. Chantelle needs to know that she’s a bridge and a stepping stone for me. She is the dust that I will clear out of the way to get to Katie Taylor.”

Basheel’s Promoter Craig Rousseau: “Basheel is only 22 so she’s young and hungry. She won the Commonwealth title in her last fight and has fought all of her big fights away, so this is no different.

“This is a huge fight and Chantelle Cameron is a great fighter. She’s not 10-0 for nothing, but this is the key to the big door for Basheel, and you’ll see the real business from her in the ring on Saturday.

“I want to thank MTK Global for hosting us and putting this fight together. Both girls have got great power, footwork and speed, so it’s going to be a brilliant fight.”

McKinson: “Since my last fight we tried calling out British fighters and big names but nobody wanted it, so I take that as a compliment. I’m now looking forward to Saturday and it’s another step up against a dangerous puncher.

“I’m ready to do the business and Pavko will be taken to school like the rest of them. I’m still only young at 25 so I’m always learning and developing every day in the gym, but I want these big fights.

“I can’t look past Pavko just yet and we’re going to take it one fight a a time, but I’m confident and I’m excited for the names we could potentially have next.”

Pavko: “I have fought movers like McKinson in the past. It’s an awkward task, but I’m confident. He fought an English puncher in his last fight, but someone from Russia is a different ball game.

“Winning will change my life. My next step is McKinson, and I’m sure he wants a better life too, so may the best man win.”

Day: “It’s been 12 fights waiting for a chance like this and now I’m finally in the right place with MTK Global as they have got me a title fight, so I’m happy to be here.

Adolphe hasn’t come to the press conference but I don’t care what he’s doing or not doing. I’m doing my training in the gym and I’m ready to go, so he can do what he wants.”

Ward: “It’s great to be back and to be shown on ESPN+ so the American fans can continue watching me. I’m looking forward to Saturday, and the plan is to get a good win and then look forward to big challenges.

“Since I’ve signed with MTK Global it’s been fantastic. World title fights is what I want, so whoever has a world title belt in the division I’m looking towards them. I’m happy to fight whoever is put in front of me.”

Adewale: “I’m excited for this fight. Since my last fight we’ve been working on preventing people from spoiling fights like my last opponent did. I just want to get on with taking on whoever I can, and I’ll fight whoever is put in front of me.”

Martin: “Thanks to MTK Global for giving me my debut on such a big platform. I’m looking forward to getting out there and showing the world what I can do as a professional. The plan is to get a good couple of wins under my belt this year to set up for a good 2020.”

Khademi: “Boxing on an MTK Global show is a great opportunity to show my skills. It’s one of the biggest platforms around and I’m here to put on a show. Nobody seems to want to fight me, but I’m going to produce another great performance.”

Promoter Lee Eaton: “This is a brilliant show. Top of the bill is a fantastic fight between Michael McKinson and Evgeny Pavko. McKinson is one of the most feared and avoided welterweights in the division, and we’re expecting big things for him in the future.

“It’s a great opportunity for Chantelle Cameron and Anisha Basheel too. Anisha is a massive puncher with eight knockouts in a row, but Chantelle is WBC Silver champion and is looking to earn that mandatory position and get that Katie Taylor fight.

“We also have a brilliant Southern Area title fight between Shaquille Day and Louis Adolphe, plus the return of 26-0 Thomas Patrick Ward, so that’s a great addition to the card.

“Further down we have the likes of Jack Martin, Josh Adewale and other great fighters too. We have three championship fights and a great eight rounder live on ESPN+ in America, plus even more on iFL TV, so we can’t wait.”

Anisha Basheel is supremely confident of blasting the undefeated Chantelle Cameron aside to earn a shot at unified world champion Katie Taylor.

‘The Massacre’ (8-5, 8 KOs) arrives from Malawi for Saturday’s hotly-anticipated WBC final eliminator on #MTKFightNight and believes her undoubted power will be far too much for host Cameron (10-0, 7 KOs) to cope with.

Ahead of a potentially life-changing 10-rounder, Basheel, who is on a run of eight straight knockout wins, said: “My power comes from heart. They call me ‘The Massacre’ and I’m going to massacre Cameron on Saturday night.

“Fans can expect me to show that I’m the true lightweight champion of the world. Katie Taylor – you’re next! ‘The Massacre’ is coming for you too.

“Meeting Taylor is what every female lightweight wants right now because the dream is to be a unifiied world champion. It doesn’t get any bigger than that – it’s the ultimate.

“I hope Taylor shows up on the night to see what she’s going to go up against. I look forward to meeting her. I’m going to knock Cameron out and then I’m going to take her belts.”

Joining this spectacular collision for the WBC Silver crown is a WBO European title clash between undefeated Michael McKinson and Russian puncher Evgeny Pavko plus a Southern Area showdown between Shaquille Day and Louis Adolphe.

Fired up Cameron hits back at Basheel

Chantelle Cameron has fired back at opponent Anisha Basheel – revealing she’ll force her to eat her words ahead of their much-anticipated final eliminator for the WBC world title on Saturday’s huge #MTKFightNight at the Brentwood Centre.

Unbeaten Cameron (10-0, 7 KOs) faces Basheel (8-5, 8 KOs) live on ESPN+ in association with Top Rank, and also live on iFL TV, with the WBC Silver title also on the line.

Basheel lashed out at Cameron earlier this week, but Cameron has responded in style and made it clear that her opponent is in a world of trouble this weekend.

Cameron said: “She’s delusional. I knew she was going to come out and start saying this stuff so she can crack on, but I can’t wait to ram my fist down her throat.

“She’s in for a treat on Saturday because she’s never faced anybody like me. I can’t wait to shut her up and teach her a lesson.

“I’ll let her crack on because I get in there and do what I’ve got to do to win. I’ve got speed, power, and boxing ability, but she’s one-dimensional. I’ll like to see what she’s got to say after the fight.

“As soon as she feels one of my big shots she’ll know she’s in against another puncher herself. All she can do is come running at me trying to knock my head but she’ll walk into one of my shots and I can’t wait for her to feel my power.

“It’s going to be great exposure fighting on ESPN+ and iFL TV, and I’m excited to get in there and punch her head in.”

A packed undercard at the Brentwood Centre also features the likes of Harlem Eubank, Jamie Whelan, Josh Adewale, Jack Martin and many more.