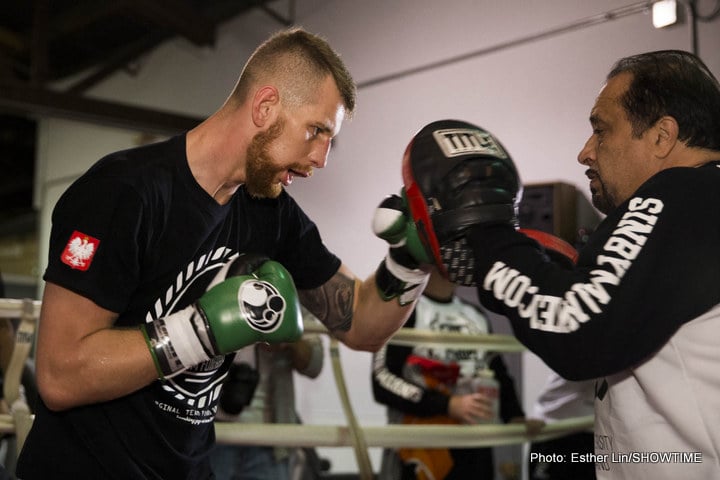 Virtually all corners of the world were represented at Thursday’s final press conference at the W Hotel in Chicago for this Saturday’s SHOWTIME BOXING: Special Edition tripleheader from the UIC Pavilion in Chicago.

Warsaw, Poland native and Chicago favorite Andrzej “The Polish Prince” Fonfara (25-3, 15 KOs) will square off with Doudou Ngumbu (33-5, 12 KOs), of Toulouse, France by way of the Democratic Republic of the Congo, in the 10-round light heavyweight main event, live on SHOWTIME (9 p.m. ET/PT, delayed on the West Coast).

In the co-feature, undefeated WBO Bantamweight World Champion Tomoki “El Mexicanito” Kameda will make the third defense of his 118-pound title against interim titlist and mandatory challenger Alejandro “Payasito” Hernandez. Hernandez (28-10-2, 15 KOs) is a native of Mexico City, Mexico, while Kameda (30-0, 19 KOs) is Japanese but has been training in Mexico since he was 15 years old. “El Mexicanito” translates to the “The Little Mexican” while “Payasito” translates to “Little Clown.”

Here’s what the fighters had to say at Thursday’s final press conference:

“I’m happy to be back here in Chicago. [Ngumbu] is a good fighter who should give me a tough fight, but I’m going to walk out the champion.

“I can’t wait to go in there and give the fans what they want to see – a good, tough fight.

“I’m going to box him a bit and use my jab, but if the knockout comes then I’m going to take it.

“I want another shot at a world title, but I have to beat this guy first and keep winning until I get another chance. I feel that I’m ready for another shot, but this guy stands in my way on Saturday.”

“This is a great opportunity for me and a great honor to fight on American soil. I trained hard to be perfectly fit for this fight and my opponent.

“It’s not a secret that Fonfara is a powerful puncher, but I’m not worried it. What happens in the ring on Saturday is the only thing that really matters. I’m not worried and I’m certainly not scared. I’m confident I have what it takes to defeat him.

“I did everything that I had to do while in training camp. I’ve trained very hard. And now I’m here to show the world that working hard pays off.

“I came all the way here to do one thing: win.”

“It’s my second time fighting here in the U.S. and I’m very excited to defend my belt again here.

“I’m Japanese, but I live in Mexico. I fight like a Mexican. Boxing fans better be ready, because Saturday night is going to be a true all-Mexican brawl.

“No question, I’ll be looking for a knockout. There’s no other way to go.”

“I’m going to take advantage of this opportunity to become a world champion. I’m ready to show that I’m the champion, not him.

“Tomoki is a good fighter. He’s fast and slick, but I am, too. I know his style, he’s predictable, and I’m ready to fight and take that belt away from him.

“He’s not a real Mexican. He wants to be a Mexican, but he’s Japanese. I’m the real Mexican here. I’m so Mexican that even the dirt under my fingernails is Mexican. Tomoki is Japanese, and he came to my country to learn from us, the Mexicans. But let’s not forget who the real Mexican is here.

“He comes here saying he represents Mexico and he’s not even Mexican. I don’t have to pretend. I’m 100 percent pure Mexican blood.

“I have my game plan ready. I’ve trained hard and I know exactly what I’m going to do in the ring — how I’m going to move, what type of punches I’m going to throw. I’m ready. This is my chance to shine and I’m not about to let it go.

“On Saturday night, I will win. I’ll be a world champion, a true Mexican champion.”

“I’m not really worried about him. I prepared very well and I hope he trained well, too. I don’t want any excuses when he lands on the floor this Saturday.

“He’s a good fighter and he has a good trainer, but he hasn’t faced anyone like me.

“I have faced better fighters in my career than he has, no question.

“I’m not looking for the knockout, but if I connect a few punches and I see he’s hurt, I’ll just go for it. I’m going to work him. This is going to be the end of Abner Cotto.

“I studied Abner Cotto very well. Day after day and night after night, I studied him throughout training camp with my trainer, Hector Bermudez. I studied his strengths and his weaknesses. I’ve learned his ways, I learned everything about him and I’m ready to defeat him.

“At 130 or 135 pounds, wherever I see the opportunity to get a world championship, I’m going to seize it.”

“It won’t be an easy fight, but I’m going to do everything I can to make sure it doesn’t go the distance.

“I’ve faced Dominican fighters before so I’m not worried about him or his power. Beating Fortuna is an opportunity to put myself in the top three in the division.

“I hope he comes ready and we can give the fans a good fight. I know I’m ready.

“I have faced some of the best fighters in the world in this division. Fortuna doesn’t intimidate me, he doesn’t bring anything that I haven’t seen before.

“Some people say that Fortuna is very powerful and I that should be very careful, but I’m not thinking about that. I’m only focused on the power in my punches. I’m not going to let them get into my head.

“My Puerto Rican fans better be ready. I’m going to deliver on Nov. 1 and I’m going to make them very proud. I’ll put up a great show. I’ve had plenty of hard fights, tests and challenges and I’ve overcome them. On Saturday, my fans are going to see a different Abner Cotto.

“The key for my victory lies on being smart, patient and taking advantage of every opportunity that comes my way. I plan on exploiting every little mistake that Fortuna makes.”

Saturday’s tripleheader, which will air live on SHOWTIME at 9 p.m. ET/PT (delayed on the West Coast), is promoted by Warriors Boxing. In the opening bout of the telecast, undefeated super featherweight contender and former Interim WBA Featherweight World Champion Javier Fortuna will take on Puerto Rican Abner Cotto in a 10-round super featherweight bout.

Here’s what the fighters had to say on Wednesday:

“I’ve seen a couple of his fights. I know he’s quick and has a different boxing style, an odd style. He’s fast and sneaky, but if I want to be the best and get a rematch with [Adonis] Stevenson then I need to beat guys like him.

“I know he’s fought tough opponents in Europe, and he’s used to fighting 10 or 12 rounds. He doesn’t have the strongest punch, but he has solid technique and he’s fast.

“My next step is the rematch with Stevenson because I feel I can beat him. I don’t know if he’ll take the fight, but if I win this one and become a mandatory challenger at some point then he’ll have to fight me. I want to be the champion.”

“Training camp went very well. We took Fonfara very seriously because he’s a well-known boxer, not just in the U.S. but in the world. So we didn’t take him lightly.

“I’m not concerned with his power. If I was concerned about it I wouldn’t have come all the way to Chicago.

“It’s a huge honor to be able to box on U.S. soil. The time difference and travel isn’t an issue for me. I’ve fought all over the world so I know how to adapt.”

“All fights are different, all opportunities are different, but we are always prepared to win. We’ll take what we get in the ring, but if the right hook to the body is there we’re going to take it.

“I sparred with him [Hernandez] about six years ago, but we’ve both changed a lot since then. He’s matured and I’ve matured. But the difference is that I’m the champion now.

“Training camp was great. We put in all the work in the gym and now we’re ready to get in there and put on a show.”

“I prepared very well for this fight. I had a very strict and rigorous routine. Definitely the hardest training camp I’ve ever had.

“Tomoki and I have sparred in the past, and that might help. But not as much as everybody might think. It’s been a while since our sparring sessions and we’ve both changed our styles and techniques. I have changed and matured as a fighter, and come Saturday night, it will show.

“I’m going to implement a different game plan. I’m not going to be focused on one particular area or punching style. I just have to go at him with everything I have. I’m going to surprise him; he won’t see me coming.

“It’s a dream of any boxer to leave a mark and make an impact in this sport and I’m grateful I have my chance on SHOWTIME this Saturday.”