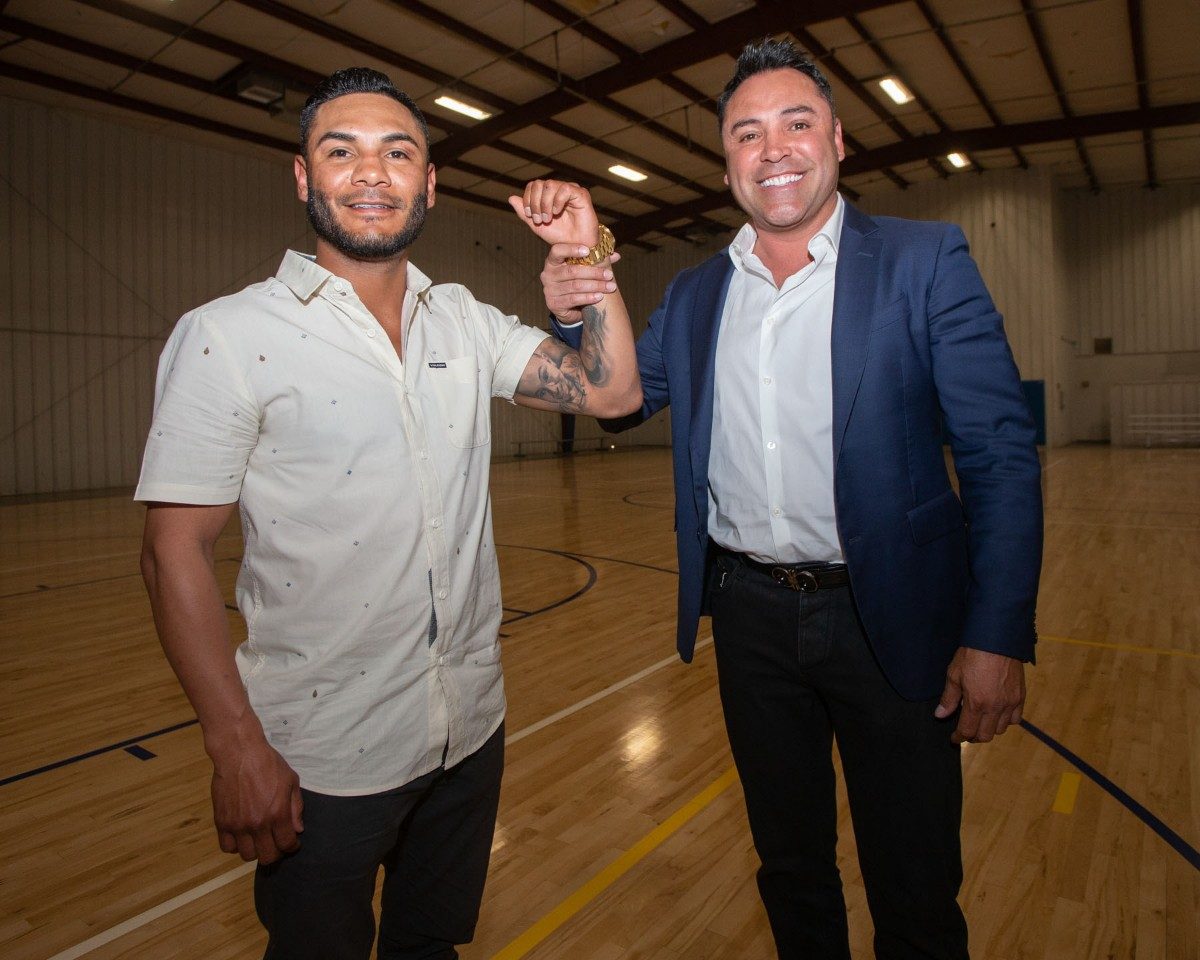 Andrew “El Chango” Cancio (20-4-2, 15 KOs) and Alberto “Explosivo” Machado (21-1, 17 KOs) will meet again to erase all doubts in a 12-round rematch for the WBA Super Featherweight World Title at Fantasy Springs Resort Casino in Indio, Calif. The event will take place Friday, June 21, 2019 and will be streamed live exclusively on DAZN.

“Andrew Cancio surprised the world when dominated Alberto Machado in their first fight,” said Oscar De La Hoya, Chairman and CEO of Golden Boy. “This was his toughest fight on paper, and he never looked better. This fight is a rematch, and Cancio is going to prove to himself that he can do it again. This will be an even better fight than the first, so make sure to catch it live at Fantasy Springs or from home on DAZN.”

Cancio is a 30-year-old world champion who recently gave new life to his career after re-signing with Golden Boy. The native of Blythe, Calif. has scored victories against the likes of Rocky Juarez, Jerry “The Corpus Christi Kid” Belmontes and Rene “Gemelo” Alvarado, and he’s also been in tough fights against Joseph “JoJo” Diaz Jr. and Ronny Rios in a professional career that started over 12 years ago. Cancio is coming off his most important victory yet, a fourth-round stoppage victory against Machado, and he’ll look to put all doubts about his win to rest by repeating his performance.

“I’m very excited to be defending my world title against Alberto Machado in the rematch from my knockout victory on February 9,” said Andrew Cancio. “This is my 11th time fighting at Fantasy Springs Casino, and I look forward to defeating Machado again in convincing fashion in front of another huge crowd of my fans.”

Machado, a 28-year-old of San Juan, Puerto Rico, is a big man for his division and boasts explosive power in both hands. After unifying two regional titles with a dominant unanimous decision victory against Carlos “The Solution” Morales, Machado defeated Jezreel “El Invisible” Corrales by way of eighth-round knockout to capture WBA Super Featherweight Title in Oct. 2017. The hard-hitting southpaw had retained his title against the likes of Rafael “Sweet Pea” Mensah and Yuandale “Money Shot” Evans, but in his last fight, he suffered a tough title loss against Cancio.

“June 21 is a great opportunity for me,” said Alberto Machado. “Besides recovering my place as a world champion, a victory will have a special meaning for me, and that makes me very motivated. I hope that Cancio is enjoying his time as a champion because I’m going with bad intentions to bring that championship belt back to Puerto Rico.”

“We are excited to have Alberto Machado back for his world title rematch against Andrew Cancio,” said Hector Soto, Vice President of Miguel Cotto Promotions. “This is an exciting fight that fans can’t miss on DAZN. It will be a classic war of unfinished business. In the first fight, Cancio went toe-to-toe with Machado and took him out. But on June 21, the story will be different. Machado will definitely be ready for war and to put everything on the line in the ring.”

Angel “Tito” Acosta (19-1, 19 KOs) of San Juan, Puerto Rico will make the fourth defense of his WBO Light Flyweight World Title in a 12-round bout. Acosta is a knockout artist who has won all of his victories by knockout.

Jorge “El Niño de Oro” Linares (45-5, 28 KOs) of Barinas, Venezuelaw ill look to bounce back from his fifth career loss in a 10-round super lightweight fight.

Local favorite Rommel “The Legacy” Caballero (5-0, 4 KOs) of Coachella, Calif. will battle in a four-round super featherweight fight against a soon-to-be-announced opponent.

READ:
Jamal James to Battle Thomas Dulorme on April 11 at the Minneapolis Armory

Opponents for this undercard will be announced shortly.

Andrew “El Chango” Cancio (24-4-2, 15 KOs) received the Key to the City today at the Joe Wine Recreation Center in his home city of Blythe, Calif. The champion was honored for his world title victory against Puerto Rican knockout artist Alberto “Explosivo” Machado (21-1, 17 KOs) this past February. At the same time, Oscar De La Hoya, Chairman and CEO of Golden Boy, presented Cancio with his new WBA Super Featherweight World Title. The event was attended by hundreds of Blythe residents, including the Mayor of the city, Dale Reynolds.

Below is what Cancio and De La Hoya had to say during today’s event:

“It was very exciting to return home to Blythe to be honored by Mayor Reynolds and have my promoter Oscar De La Hoya present my world championship belt. It was great to be among my family, friends and supporters to share this special occasion with them.”

“After the Joseph Diaz fight, I thought that this might not be for me. I said, ‘This is it.’ But for me to now to be a world champion, it’s crazy. It surprises me. Sometimes I go to work and I think, ‘Wow, I’m a world champion!'”

“It’s very special for the City of Blythe to have its first world champion ever. I feel proud and humbled that Andrew Cancio is the one to accomplish this. It couldn’t have happened to a better person. He’s a hard worker, and he’s demonstrated that in the past. He’s a man that the kids here are going to look up to.”

“He took a hiatus after his fight against Joseph Diaz Jr. He had to re-think things, but he came back and won a world title. It’s up to the fighter to take advantage of such opportunities, and that’s what he did. He was down in the first round [of the fight against Machado]. Everyone thought it was over. But he demonstrated his heart. He demonstrated that he wanted the world title, so he knocked him out.”

“I think Andrew Cancio is the perfect example of what a world champion should he. He has the heart and desire and capture great opportunities inside the ring.”