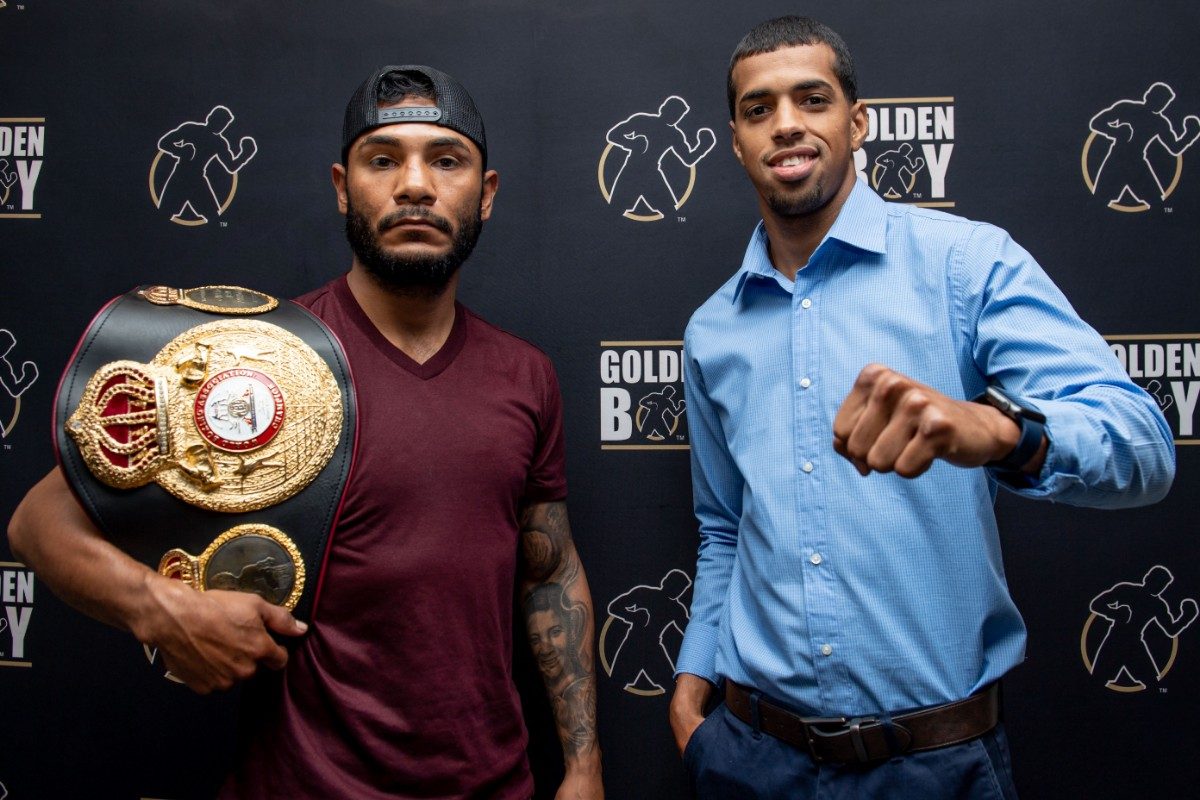 Andrew “El Chango” Cancio (20-4-2, 15 KOs) and
Alberto “Explosivo” Machado (21-1, 17 KOs) hosted a media roundtable at the Golden Boy Headquarters ahead of their 12-round rematch for the WBA Super Featherweight World Title. Their fight will take place on Friday, June 21 at Fantasy Springs Resort Casino and will be streamed live on DAZN.

Below is what both fighters had to say at today’s roundtable:

“For a lot of people it was a surprise that I beat him, but for me, like I said before coming into the fight, I knew what I was going to do. The way the training camp went I was barely starting to get my rhythm. It’s the first time I’ve been active in a while, back to back to back camps.”

“My body is responding a lot quicker than usual. My timing is even better. This next fight I don’t see anything differently. I feel like we’ve gotten stronger and quicker. It still bothers me when they use the weight issue as a reason he got beat up.”

“I don’t expect anything different for this fight. I think he just went up against a guy that can get hit, get knocked down, and come back to fight even harder. I told people he’d never been in the ring with a fighter like me. He was finally in there with somebody who is going to be in there tough and is going to fight toe-to-toe with him. Leading up to the last fight, he said he had a good camp. We didn’t hear any excuses until after he lost.”

“We’re going to jump on him from the start. He better be ready. Round one is going to be like round five for me. I’m going to jump right on him. I know what I have to do to prevent him from being dangerous.”

“I don’t talk too much about [arriving to Freddie’s camp two weeks late] because I want to give all the credit to Cancio. He did his work and won the fight. I had a situation with my family. I have a baby, a one-year-old son. He had surgery in the groin. I had to stay with my wife. I had to tend to my wife. The process of recuperation for a baby is very difficult. It was difficult to come here, and I came here in a condition I had not been used to.”

“My manager, Juan De Leon, is the person working close to my side. He knows what I went through. Regardless, Cancio really did his work in the fight. Now I am getting ready the way I’m supposed to, and I’m extra motivated this time. This Machado will be different. You will see the real Machado. He will be explosive, quick and smart. He’s coming this June 21.”

“When the fight ended the way it did, I still knew in myself that I could beat him. When my team in Miguel Cotto Promotions and Golden Boy Promotions called me, I told them I wanted the rematch. I want to make the sacrifice. I’m going to make the weight good. You’re going to see. I’m decided and motivated.”

Cancio vs. Machado II is a 12-round fight for the WBA Super Featherweight World Title presented by Golden Boy and Miguel Cotto Promotions. The event is sponsored by Tecate, “THE OFFICIAL BEER OF BOXING,” and Hennessy “Never Stop. Never Settle.” The event will take place Friday, June 21 at Fantasy Springs Resort Casino and will be streamed live on DAZN.

Tickets for the event are on sale and are priced at $35, $45 and $55. Tickets will be available at the Fantasy Springs Resort Casino box office, by calling 1-800-827-2946, or by purchasing online at www.fantasyspringsresort.com.