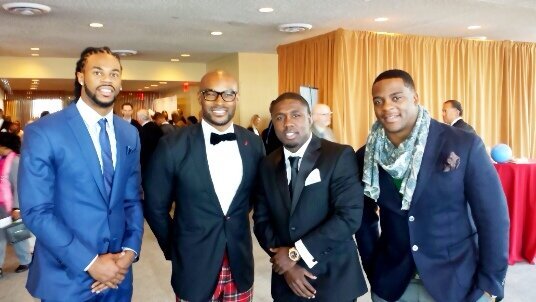 (OAKLAND, CALIF.) -While sports fans from across the country convened in New York for a week of parties and fun, former two-time World Champion Andre Berto (Winter Haven, Fla.) lent his voice to two critical issues – concussion in sports and the ongoing recovery in Haiti.

Berto joined a gathering of global leaders, including the grandsons of the late Nelson Mandela, the son of Bob Marley, as well as former and current professional athletes and entertainers at the United Nations on Friday for a critical discussion of how to assist struggling nations. The panel discussed valuable opportunities and achievements that exist in the world of sport for global development. Known for his ongoing work in his native Haiti, Berto spoke to the United Nations ambassadors, diplomats, NGO and non-profit leaders in attendance about the ongoing relief efforts in the island nation and the need to assist Haiti with growing in to a completely self-sufficient country.

Berto was honored for his past philanthropic efforts and enjoyed the opportunity to speak to the prestigious group, which included Ndaba and Kweku Mandela, and Ro Marley, about his goals for his family’s homeland.

“The time I spent with this inspiring and passionate group of people and the opportunity to share the importance of providing the right type of assistance in Haiti was life changing,” Berto said. “I know that if we all continue to work together, we can make a real difference in Haiti and all the nations that badly need our help.”

The 2004 Haitian Olympian conveyed the importance of promoting empowerment and explained that the primary goal is to provide the type of assistance that will allow Haiti to flourish without outside aide in the future. He plans to partner with the Jack Brewer Foundation, which hosted the summit, in its future efforts to grow sport and promote the health benefits of fitness.

Prior to the Global Ambassadors Summit on Thursday, Berto participated in the #C4CT Concussion Awareness Summit. Berto sat on the athlete panel and shared his feelings on how the concussion epidemic has impacted him both personally and professionally as a combat sport athlete as well as the role it has played in how he prepares for his future after boxing. He joined several active and former football players to discuss the issue and the importance of improving safety in all contact sports.

Berto closed his busy and inspirational week in the Big Apple at a fundraising event for Project Medishare at the Klein Sun Gallery. He and former Miss Haiti, Sarodj Bertin, co-hosted the Haitian art event, which showcased authentic pieces from Haitian artists. Berto couldn’t leave empty handed, purchasing his favorite painting from the show for his Los Angeles area home.

He returned to Oakland on Sunday to resume training with Virgil Hunter and his team. The 30-year-old received clearance from his physician to resume boxing training in mid-January following August shoulder surgery to repair an injury he suffered in the second round of his July bout with Jesus Soto-Karrass. Berto is planning a summer return to the ring, and is currently honing his skills under Hunter’s tutelage in the Bay Area.