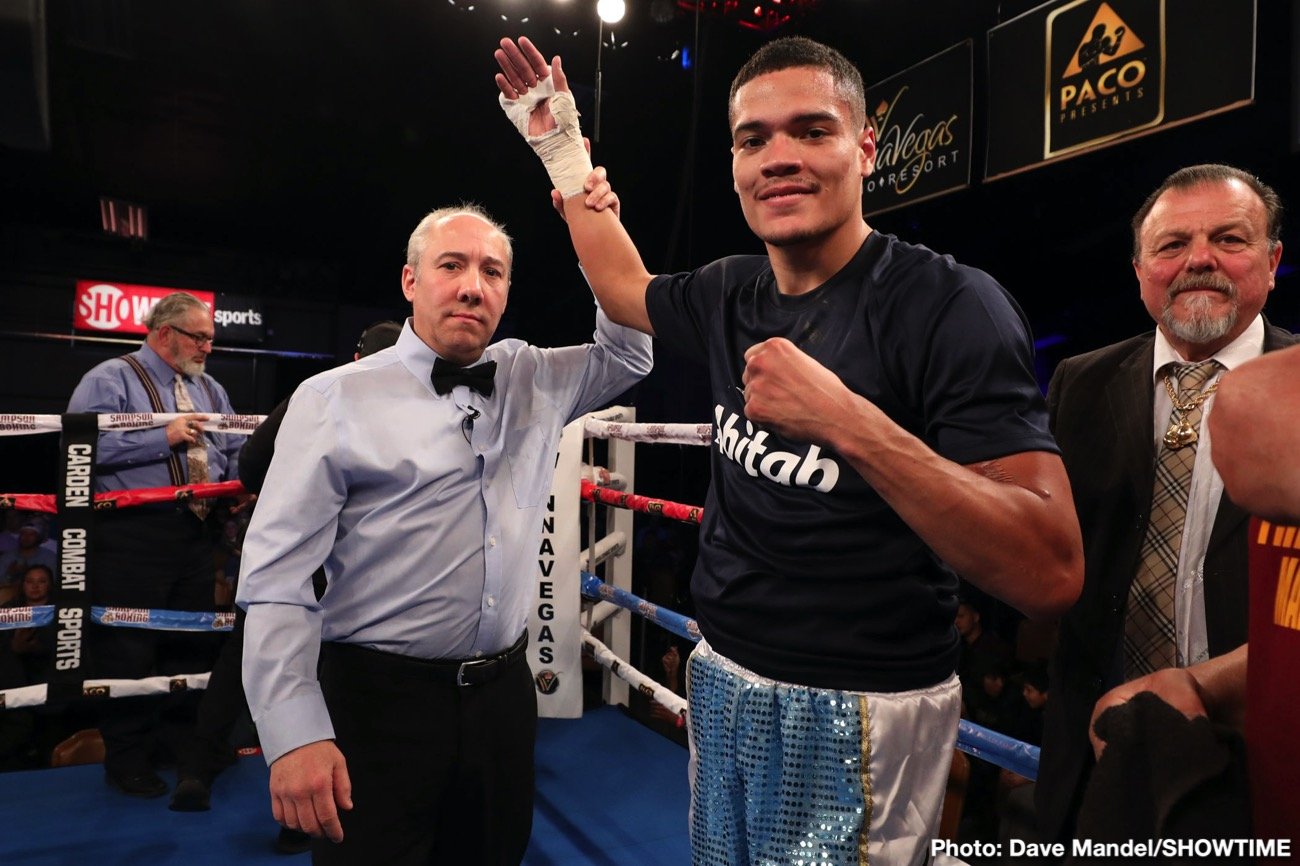 Undefeated middleweights Amilcar Vidal and Edward “The Hunter” Ortiz will square-off in a 10-round showdown that headlines FS1 PBC Fight Night and FOX Deportes Saturday, November 14 from Microsoft Theater in Los Angeles.

The event will be promoted by TGB Promotions and will occur without fans in attendance at the Microsoft Theater, an AEG venue in downtown Los Angeles.

“Unbeaten middleweights Amilcar Vidal and Edward Ortiz will look to announce themselves as contenders in the middleweight division they meet on FS1 Saturday, November 14,” said Tom Brown, President of TGB Promotions.

“Hard-hitting cruiserweight Efetobor Apochi is fast approaching the cruiserweight elite and will look to keep his knockout percentage perfect against the tough Joe Jones. Adding in a matchup between undefeated featherweight prospects Henry Arredondo and Eros Correa makes this an even more electric night for the fans.”

Born in Montevideo, Uruguay, Vidal (11-0, 10 KOs) now fights out of Coachella, California, preparing to fight in the U.S. for the second time on November 14.

The 24-year-old’s previous stateside fight came last November when he stopped then unbeaten Zach Prieto in round one. In January of this year, Vidal followed that up with another first-round stoppage of a previously undefeated fighter, as he dropped Leopoldo Reyna twice to earn the victory.

The 28-year-old Ortiz (11-0-2, 4 KOs) won three times during 2019, including a triumph over Alexis Camacho in November to cap off the year. A native of San Antonio, Texas, Ortiz returned to action in August, beating Antonio Todd by decision.

Fighting professionally since April 2016, Ortiz fought to two draws in his first five bouts and has emerged victorious every time he’s entered the ring since July 2017.

A native of Nigeria who now trains with renowned coach Ronnie Shields in Texas, Apochi (9-0, 9 KOs) has knocked out all of his opponents since turning pro in 2016.

The 32-year-old added three stoppages to his tally in 2019, including an impressive knockout over tough prospect Earl Newman in May. Most recently, he defeated Larry Pryor last October via a TKO in the fourth round.

Jones (11-2, 8 KOs) will step into the ring for the first time in 2020 after two wins in 2019, including a triumph over unbeaten Montez Brown and a decision loss to undefeated Richard Rivera in December. The 25-year-old fights out of Leesburg, Virginia, and has competed professionally since 2013.

The 24-year-old Arredondo (7-0, 4 KOs) will step up in competition on November 14 when he takes on a fellow unbeaten in Correa. The San Antonio, Texas native, added five victories to his tally in 2019, improving his pro record after turning pro in 2017. Arredondo enters this fight with knockout wins in his last three outings.

Correa (9-0, 7 KOs) turned pro in 2017 after an extensive amateur career and stopped his first six opponents inside of the distance. The 27-year-old trains out of his native San Jose, California, preparing for his toughest protest to date in Arredondo. Correa most recently scored a knockout victory over Saul Alberto Garcia in January.