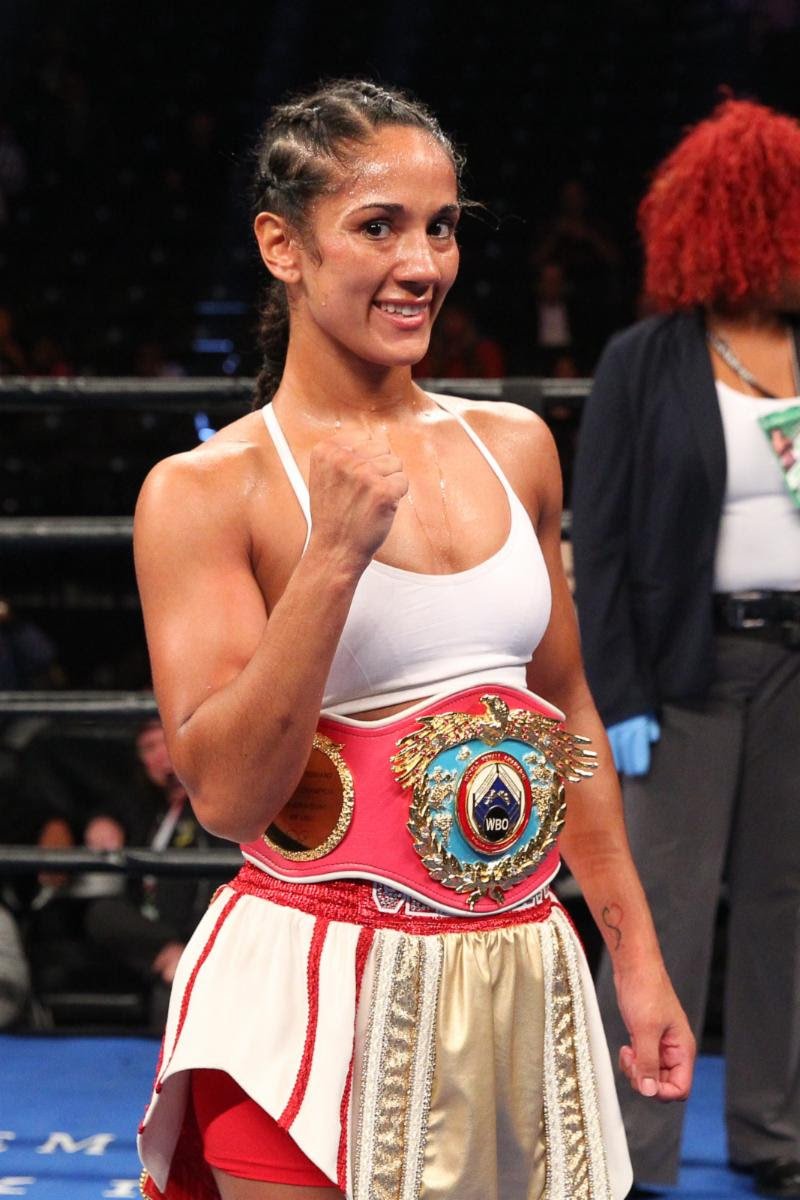 Amanda Serrano says she can win World titles in EIGHT weight divisions – but first must defeat Eva Voraberger for the vacant WBO Super-Flyweight title at the Hulu Theater in Madison Square Garden, New York on Friday January 18 to land a World title in her seventh weight class live on DAZN in the US and on Sky Sports in the UK.

Serrano guns for seventh heaven when she meets the Austrian in the Big Apple and the Brooklyn-based Puerto Rican star can surpass Mexican legend and six-weight world champion Oscar De La Hoya – and will not rule out joining Manny Pacquiao as an eight-weight ruler in the future, saying weight is no obstacle thanks to her frame and work-ethic.

“As a Puerto Rican, there’s a rivalry with Mexico so I want to beat Oscar’s number next week!” said Serrano. “Maybe we should then go for Pacquiao and hit an eighth weight?

“I haven’t really sat down and acknowledged what I’ve done. My trainer tells me it’s huge and that being the third fighter to win World titles at seven weights is amazing. A little Latina from Bushwick can make history, it’s great.

“The weight is not an issue when you have a great team behind you. My MMA coach came to California to help with my nutrition to drop the weight down so it’s been fun really, I have been trying new things anyway and saw how fast the weight was coming down.

“I’m a small girl so it’s better for me to drop weight rather than go up in weight but with hard work and dedication I feel I can go up and down in weights. My last fight was at 140 where I had to run less and eat more, so this has just been the opposite of that. I always train hard and I’m in the gym 365 days a year.

“Eva’s a champion, she’s signed on the dotted line so she’s coming to fight – I just can’t wait for next Friday so I can have me some burger! My team have watched her, they come up with the gameplan and I work hard to put that plan into practice in the ring.”

Serrano’s clash with Voraberger is a DiBella Entertainment bout in association with Matchroom Boxing USA and is part of a three World title fight bill, topped by Demetrius Andrade’s first defense of his WBO World Middleweight title against Russian Artur Akavov and Irishman TJ Doheny’s maiden defense of his IBF World Super-Bantamweight title.

Former World Lightweight ruler Jorge Linares continues his comeback trail on the card when he meets Pablo Cesar Cano. Linares’ (45-4 28KOs) reign as WBA and Ring Magazine champion was ended in an epic clash with pound-for-pound star Vasily Lomachenko at Madison Square Garden in May, with Linares felling the Ukrainian star in the sixth before being stopped four rounds later.

Linares returned to winning ways in September with a third round stoppage win over Abner Cotto in September in California and starts 2019 with his 50th pro fight against Cano (31-7-1 21KOs), the Mexican former World title challenger who landed the WBC International Silver strap in his last outing in September – and Linares is joined by fellow Golden Boy Boxing star Alexis Rocha (12-0 8KOs), the 21 year old Welterweight talent ready to begin his charge for titles in 2019.

Long Island favorite and former World ruler Chris Algieri (22-3 8KOs) steps up his pursuit of regaining his World champion status at Super-Lightweight as he faces fellow New Yorker Danny Gonzalez (17-1-1 7KOs), while one of Matchroom Boxing USA’s rising stars tastes his first action in 2019 on the card as Reshat Mati (2-0 1KO) returns to the scene of his last outing in October where the ‘Albanian Bear’ went the four round distance in his second fight.

Sporting a record of 35-1-1, with 26 knockouts, the Puerto Rican-born Serrano will challenge Austria’s Eva Voraberger (24-5, 11 KOs) in a 10-round clash for the vacant WBO Super Flyweight Women’s World Title. With a victory, Serrano will tie boxing legend Manny Pacquiao as the only boxers to win world titles in seven weight classes.

This will be the first time in her 10 years as a professional that Serrano has competed in the super flyweight (115lb.) division. Most recently in boxing, Serrano won her sixth world title in the junior welterweight division (140lb.) defeating Yamila Reynoso on September 8, 2018, at home in Brooklyn, NY. The 30-year-old followed that up with a mixed martial arts victory on October 13, 2018, competing for Combate Americas.

“On Friday, January 18, boxing fans will get the opportunity to see Amanda Serrano, one of the best pound-for-pound fighters in the world, continue to cement her legacy when she competes for a world title in her seventh weight class,” said Lou DiBella, President of DiBella Entertainment. “Eva Voraberger is an excellent fighter, one of the world’s best at 115/118-pounds. Her record reflects her excellence. In a span of four-and-a-half months, Amanda will attempt to win a world title six weight classes below the 140-pound title that she won last September. This has never been done by a fighter, regardless of gender. I truly believe that 2019 will be an historic year for women in boxing; Amanda Serrano will get it off to an historic start.”

Speaking after a day of workouts, Serrano stated, “I’m having a great training camp for my fight on January 18. I’ll be attempting to break my own record and win a world title in a seventh division. Any time you attempt to make history, it gives you an extra drive to push yourself to succeed. I am the only female and Puerto Rican, male or female, to win titles in six weight classes, and I did it in crazy fashion. I first won world titles at junior lightweight and lightweight, dropped down to the featherweight and bantamweight classes, then moved back up to junior welterweight, and now I’m headed to super flyweight.”

“I am fighting a tough and very skilled world champion in Austria’s Eva Voraberger. She currently holds the interim WBC bantamweight title and only has three pounds to drop whereas I’m coming off of winning the WBO 140-pound world title just four months ago. I’ve heard the critics say that I’m crazy for dropping this much weight so quickly, but I’ll prove them wrong. I am known as the ‘Real Deal’ for a reason.”

About fighting on DAZN, Serrano continued, “This is the beginning of my contract with DAZN that will culminate with a fight against Katie Taylor. This isn’t about taking easy fights before a big payday. This is about legacy and I will continue to cement my place in boxing history by taking risks. Dropping down to 115 pounds is going to be my first challenge and then I will move back up to fight for another world title before meeting Taylor.”

“I won the Golden Gloves at Madison Square Garden in 2008 and I am thrilled to be back there vying for a world title as a professional. Don’t miss this fight. I am coming to take the title by knockout.”