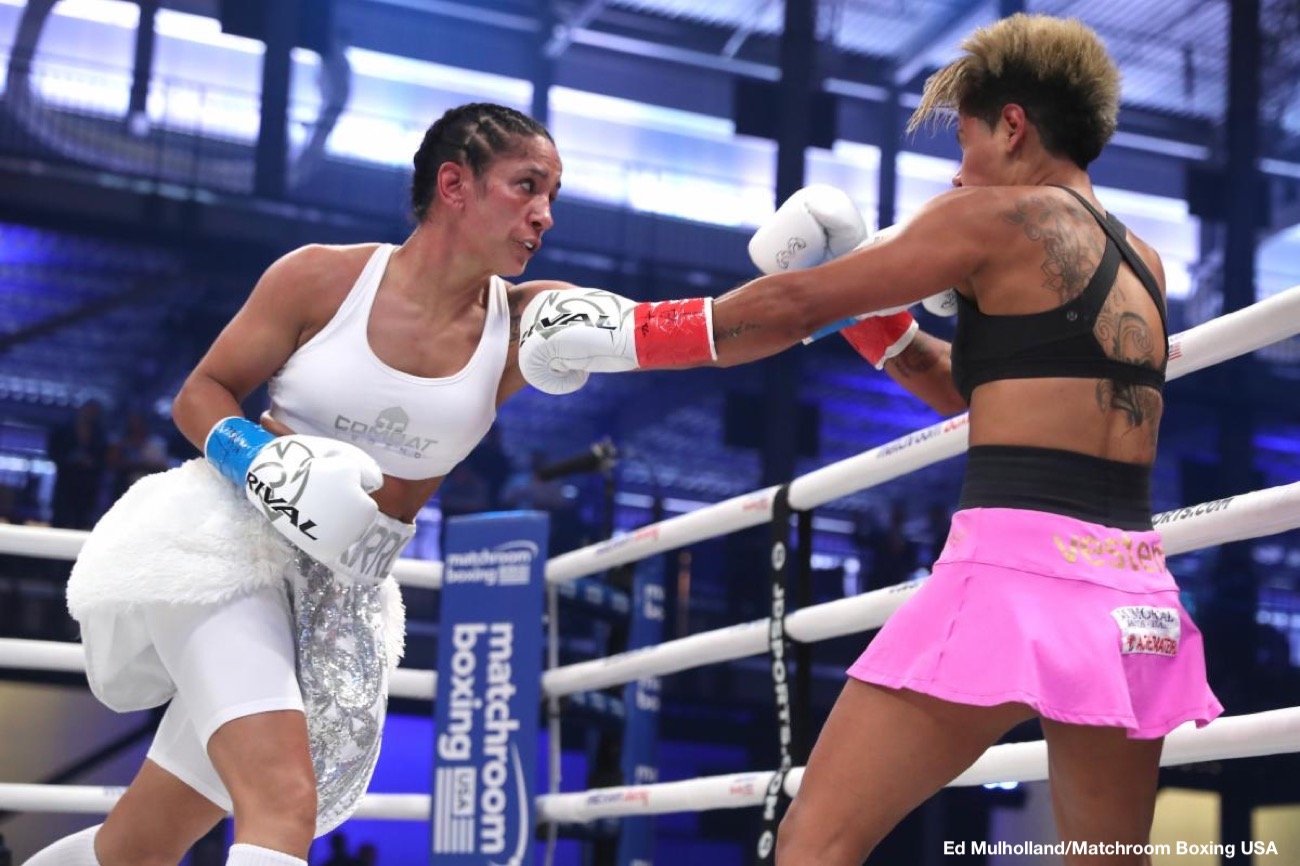 Co-promoted by DiBella Entertainment and Matchroom Boxing USA, the Puerto Rican native dominated the action, dropping Da Silva late in the second round then punishing her in the third with a barrage of shots to the head and body until the referee halted the contest 53 seconds into the frame.

Said the pleased Serrano, “I’m happy to have gotten the ring work after dedicating the last two months to strictly wrestling and jiujitsu for my canceled mixed martial arts fight. Thanks to my promoter, Lou DiBella, who I called and told that I needed to stay active and, as usual, he came through. My opponent was tough and game. She had just fought the very talented Tiara Brown last month so we knew she was not only in fighting shape but durable to go the distance with Brown.

“We wanted the work. When I fought Heather Hardy, after the first round, I took my foot off the gas. With this girl, I showed once I see you hurt, it’s wrap time. True fight fans knew the difference. I’m happy with my trainer Jordan’s decisions on what to do in the ring. There’s always a method to his madness.”

“Amanda Serrano’s performance against Simone Da Silva was yet another reminder that she’s the most dangerous lady in boxing,” said Lou DiBella, President of DiBella Entertainment. “She’ll prove that against Katie Taylor when they meet in what will be the Super Bowl of women’s boxing.”

Seven-division world champion Amanda “The Real Deal” Serrano (37-1-1, 27 KOs), of Brooklyn, NY, will return to action Tomorrow Night, Thursday, January 30, at the Meridian at Island Gardens in Miami, FL, in an eight-round non-title lightweight clash against Simone Aparecida Da Silva, of San Paulo, Brazil. The fight will be part of the stellar “Miami Fight Night” event presented by Matchroom Boxing.

Co-promoted by DiBella Entertainment and Matchroom Boxing USA, the Puerto Rican native Serrano was excited about the opportunity, saying: “I was training for a mixed martial arts bout that was scheduled for January 25 in Puerto Rico and I was working super hard on my ground game. A few weeks ago, I was told the card was canceled, so I spoke with my promoter Lou DiBella. I told him that I wanted to stay active so I can be well prepared for the Katie Taylor fight later this year. My fans deserve for me to be in the best shape for that one. I only fought twice last year and those bouts were eight months apart. We both owe everyone that has been looking forward to the Taylor showdown to be 100% ready, and I promise that I will be.”

“Unquestionably, Amanda is one of the pound-for-pound queens of boxing. Her bout with Katie Taylor will be the Super Bowl of women’s boxing,” said 2020 International Boxing Hall-of-Fame Inductee Lou DiBella, President of DiBella Entertainment. “We’re thrilled that she will get another opportunity to showcase her talents against a quality opponent tomorrow night before she chases history.”

Earlier in the year, Serrano stopped Eva Voraberger in the first round on January 19, 2019, winning the vacant WBO Super Flyweight world title.