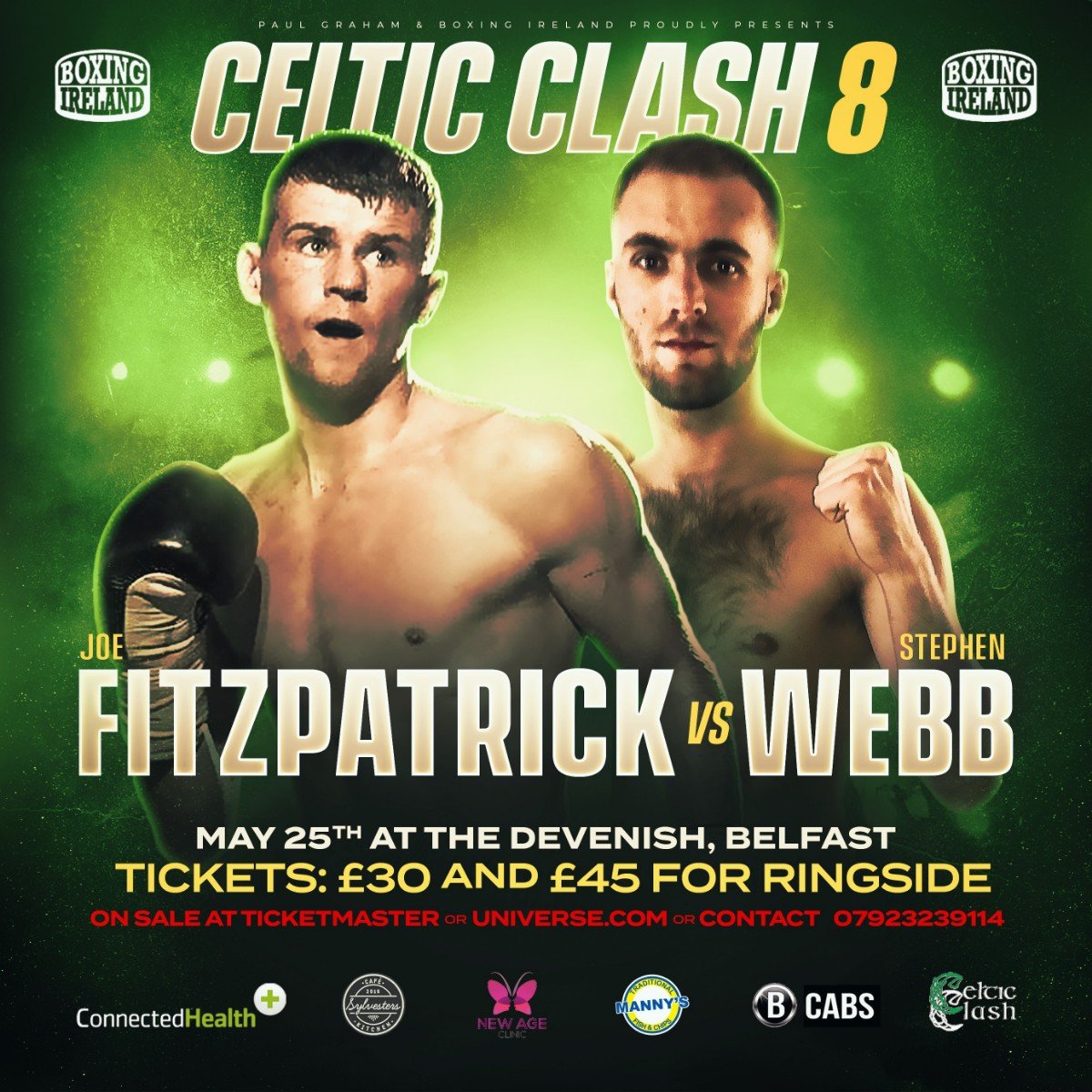 The hugely popular Celtic Clash series will return to Belfast next month.

The Devenish Complex in Belfast will play host to ‘Celtic Clash 8’, a jam-packed night of professional boxing, on Saturday May 25.

In a rare all-Belfast clash, Divis lightweight starlet Joe Fitzpatrick [8-0, 5 KOs] will take on St James’s prospect Stephen Webb [1-0] in a Titanic six-rounder at the top-of-the-bill and the ‘Westies’ will be supported by a further bumper card on the night.

The card is being ran by Boxing Ireland Promotions – in association with Scottish outfit Prospect Boxing – and, in a way, it is a return home.

Set up by London-based Sligo fight boss Leonard Gunning, Boxing Ireland had a hand in the inaugural Celtic Clash way back in 2013 at the Devenish. Here Sligo slugger Stephen Reynolds knocked out Warrenpoint’s Declan Trainor to win the Celtic cruiserweight title in what is, to this day, remembered as one of the great modern Irish fights.

The series was revived in 2017 by Gunning alongside Dubliner Stephen Sharpe and the pair managed to help rejuvenate boxing in Dublin, running an unprecedented number of shows in a short space of time. However, Belfast, the capital of boxing in Ireland, always remained on the agenda.

Respected Belfast fight figure Dennis Morrison was brought on board last year as Head of Northern Operations and a toe was dipped on Alio Wilton’s ‘Back in Belfast’ card last November. Now Boxing Ireland Promotion take centre stage with a show packed with rising prospects, returning favourites, and a good ol’ grudge match to top it all.

A ‘Brawl for The Falls’, lightweights Fitzpatrick and Webb will, at last, settle their differences following plenty of on-line sniping. The pair sparred together last year and were due to fight in February only for the match-up to fall through. Thankfully the fight, the first all-Belfast pro bout to take place in Belfast in over four years, will now take place on May 25.

‘The Dragon’ Fitzpatrick, a former amateur star with Immaculata ABC, was a 2014 Commonwealth Games silver medallist and made an impressive start to life in the pros. However, inactivity and commitment issues saw his progress stall. Now finally back firing under Boxing Ireland Promotions, the 24-year-old has a fight to stick his fangs into.

There is no love lost between the pair and the always-confident Fitzpatrick notes how “I commend his confidence as well as I look forward to his embarrassment. I’ll beat him the way in which I beat my previous opponents. He just another journeyman. This goes one of two ways: I start his career as a journeyman or I finish his career completely. The lightweight division is my division. I’m the best lightweight in Ireland and I’m going to prove that this year.”

Webb, a graduate of the Holy Trinity Boxing Club in Turf Lodge, has turned heads since turning pro and holds plenty of ambition. ‘The Spider’ has big belief and explains how “I didn’t have to think twice. I jumped at the chance [to fight Fitzpatrick], it’s the perfect opportunity to announce myself onto a big stage and I know no matter what he is in the ring I’ll have an answer for it. If I have to box him for six rounds so be it, or if I have to stand and fight for six rounds so be it! Either way, I’ll get the job done,”

“We are delighted to bring Celtic Clash back to Belfast where is all begin. We’ve been planning to come back to the city for over a year but were waiting for the right fighter and the right fight. I think we’ve have found both in Joe Fitzpatrick vs Stephen Webb,” added Boxing Ireland’s Leonard Gunning.

“We have rebuilt the Celtic Clash series on the back of providing fans with what they really want to see, and that is local derbies with more than a hint of spice, Fitzpatrick-Webb delivers that in buckets and that’s why it is the perfect fight to bring the Celtic Clash brand back to Belfast.”

Aside from the main event, there are lots of top talents to be on the look-out for. Making his return after over a year out of the ring, New Lodge super featherweight Ciaran McVarnock [9-0-1, 3 KOs] will be looking to kick-start his pro career. Grand-nephew of the legendary Bunty Doran, McVarnock is never in a boring fight and, now training with Gerry Storey Jr and Sr, is aiming for titles in 2019.

Tickets for the night cost £30 (Unreserved) or £45 (Ringside) and are available from all the boxers involved or online at Universe.com or directly on 07923239114.