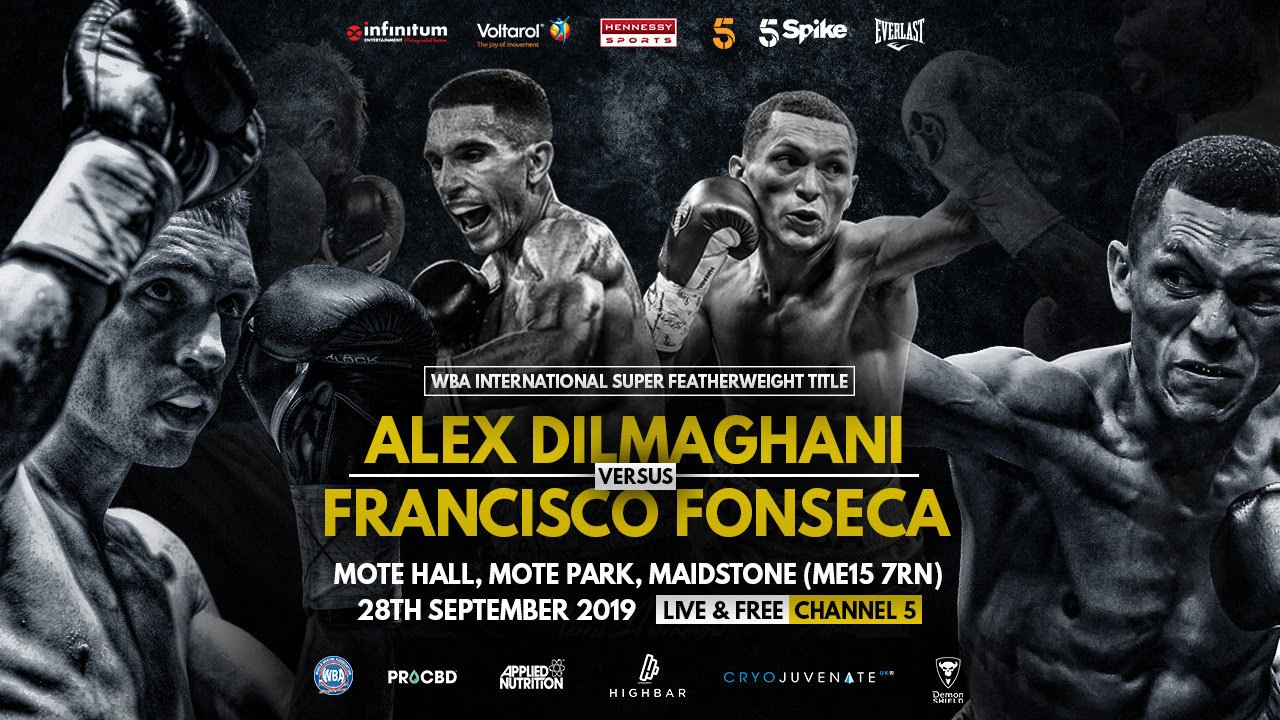 The classy 28-year-old from Crayford, Kent, who enters on an incredible eight and a half year unbeaten streak and who earned lavish plaudits when he returned to Britain from a five year campaign in North America – to defeat the Slovakian hard case Martin Parlagi at Manchester’s Victoria Warehouse in late May – shall be seeking to smash his way into the world ranking’s by neutralising Nicaragua’s nuclear hitting and two-time World title challenger Francisco Fonseca.

The high-grade contenders collide over 12 rounds for the Vacant WBA International belt – and a guaranteed world rating – in a salivating contrast of styles that stands as a world title eliminator in all but name. The show will be promoted by Mick Hennessy in association with Steve Wood VIP Boxing Promotions, screened live in the UK on free-to-air Channel Five and 5Spike.

Originally, Dilmaghani was scheduled to headline for the first time in his home county of Kent but due to unforeseen venue difficulties with The Mote Park Theatre, promoter Hennessy has switched to where dazzler Dilma was so well received in late spring.

The frighteningly focussed Southampton University law graduate who took himself to Mexico to learn under legendary trainer Nacho Beristain and alongside the great Juan Manuel Marquez is unlikely to be unsettled by the late switch, but promoter Hennessy tendered the following explanation.

‘We apologise to the fans who were expecting Alex to headline in Kent for the first time, but at this short notice we have had no alternative but to move the fight,”

‘Nevertheless, we’re delighted to work again in association with renowned promoter Steve Wood and his VIP Boxing Promotions team who already had a great show in place for that date and now with Dilmaghani v Fonseca added as the main event, together we are thrilled to present a fantastic evening of Championship Boxing, live on Channel 5,”

‘Alex will get a fabulous opportunity to show why he is the dangerman in the 130lb division and why he has been avoided like the plague by his rivals. This is a real fight for Alex against a hard and experienced fighter in Fonseca who only has two very competitive losses against elite world level fighters in Gervonta Davis and Tevin Farmer. I’m seriously excited about this fight and I can’t wait to see Alex perform to his best and show precisely what I have been talking about – that’s he’s boxing’s best kept secret.”

Chief support on the talent stacked undercard sees undefeated starlets Jack ‘The Giant Killer’ Flatley and Harry ‘Hammer Time’ Scarff fight it out over 10 rounds for the former’s English super-welter title. Bolton wonder Flatley, a former national amateur finalist at both junior and senior level, is yet to be beaten in 16 but the ex-England international can expect to be stretched right to the limit by 7-0 Derby six footer Scarff in a mouthwatering match-up.

Wood is thrilled to add the premium Dilmaghani-Fonseca title showdown to top his already quality stacked show and deliver fans a thrilling night of action. He said, “It was short notice, but I’m pleased that VIP Boxing Promotions could assist Mick Hennessy and Channel 5. We’re excited to add the International title fight between Dilmaghani and Fonseca to the show that will compliment the English title showdown between the unbeaten contenders Flatley and Scarff, plus some of our best young talent will get tremendous exposure on 5Spike.”

Promoter Hennessy’s son, Michael Hennessy Jr, an all action middleweight who is undefeated in two, is set to feature in a six rounder and a full undercard featuring several of Steve Wood’s rising talents is set to garnish an unmissable night of entertainment.

Passions are sure to run high when Darwen’s robust Mickey Ellison (9-2) locks horns with Manchester technician Charlie Schofield (unbeaten in 16) in a seriously spicy looking eliminator for the English super-middleweight belt.

Hennessy Sports would like to apologise for any inconvenience caused to the supporters and local fighters on the original card. Members of the public who have purchased tickets for the Mote Park Theatre can go to their original point of purchase for a full refund.

Classy super-featherweight Alex Dilmaghani aims to punch himself into the 130lb world rankings and line up a world title fight when he faces the dangerous Nicaraguan Francisco Fonseca at Mote Hall, Mote Park, Maidstone, on Saturday 28th September, live on terrestrial free-to-air Channel 5 in the UK.

A fistful of fighters from the home isles already feature in the 130lb world rankings, but criminally, the super talented 28 year old southpaw – who is now undefeated in his last 15 starts spanning well over eight years – isn’t among them.

However, the dashing ‘Dilma’ – now under the guidance of renowned promoter Mick Hennessy – is determined to show he deserves to be listed alongside the best in the division by scalping the lethal Latino.

The 25 year old from the nation that delivered ring legends Alexis Arguello, Ricardo Mayorga and ‘Chocolatito’ Gonzalez has been bettered just twice in a 28 fight pro career that has brought a daunting 19 stoppage wins.

Both reverses on Fonseca’s slate came in IBF world title tilts on megashows over in the USA. Baltimore’s Gervonta ‘Tank’ Davis stopped him in eight (contentious) on the Mayweather-McGregor undercard in Las Vegas (2017), while Philadelphia’s Tevin Farmer edged him out on points over 12 on a ‘Canelo’ Alvarez card at the hallowed Madison Square Garden, New York last December. Fonseca has rebounded with a hat-trick of impressive stoppage wins in 2019 and is clearly a major player within the division.

Dilmaghani, a Southampton University law graduate who conquered his craft under arguably the sport’s finest contemporary coach ‘Nacho’ Beristain at the world renowned Romanza Gym in Mexico City, is positively salivating at the prospect of breaking out into genuine world class.

‘Many other leading contenders turned down the opportunity to face me on this date but Fonseca showed he’s a true gladiator by stepping up,’ stated Dilmaghani, who copped rave reviews for his eight round slaughter of 25-2-1 Slovakian Martin Parlagi – who had never been stopped – in his first British start for almost six years in late May.

He added, ’But Fonseca will be dealt with accordingly. I’ve stopped seven of my last 10 and will certainly be seeking an eighth here. I expect another fantastic win on free to air terrestrial TV that’ll expose my talents and take me a step closer to the world title fight that is my destiny.’

Hennessy is delighted to bring national free-to-air broadcaster Channel 5 to Kent for a big night of boxing. He said, “I’m really going to be banging the drum for Alex now and with Channel 5’s backing I firmly believe that he is going to become a big star on the channel. The fight against Fonseca, who is a world class operator, is just the type of fight Alex needs and it will bring the best out in him. When people see it put on him that is when he will really shine and his heart and talent will be clear to all. I’m really excited with this main event fight and we’ll announce a quality undercard over the next few days.”

Tickets are priced at £40 and £75 (VIP) and are available from MyFightTickets at myfighttickets.com