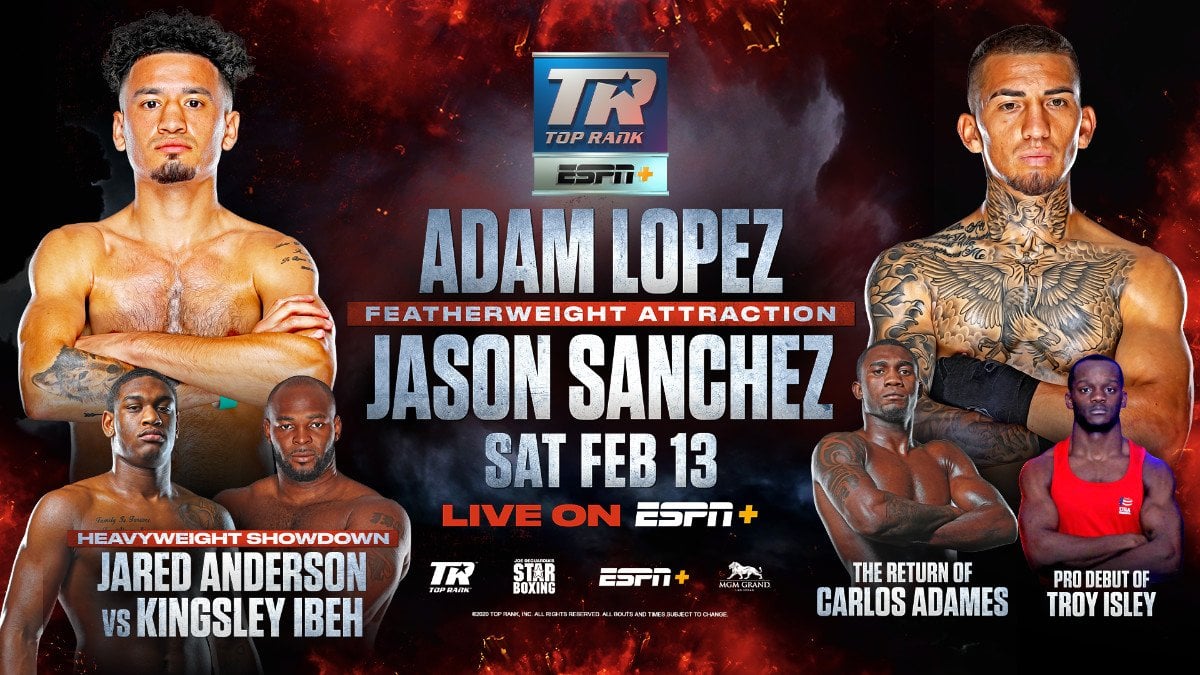 Lopez (14-2, 6 KOs), from Glendale, Calif., has earned his reputation as the “Glendale Gatti” with a series of action-packed fights. Following his controversial TKO loss to Oscar Valdez in November 2019, Lopez returned last June with a majority decision over Louie Coria in one of the year’s best fights. Sanchez (15-2, 8 KOs) challenged Valdez for the WBO featherweight world title in June 2019 and dropped a competitive unanimous decision. He has split a pair of bouts since then, most recently falling short via a 10-round decision to Christopher “Pitufo” Diaz last June.

“On February 13, we’re back on the big screen,” Lopez said. “Mark your calendars, call off work, do what you have to do. You don’t want to miss this one. This is the year ‘BluNose’ gets his strap. Stay tuned, ladies and gentlemen.”

Sanchez said, “I’ve never been more ready. I just came back from a loss, so I am more determined and hungrier than ever. I will not take another loss, and that is my biggest motivation.”

Anderson (7-0, 7 KOs), from Toledo, Ohio, went 5-0 in 2020, including four Bubble knockouts. He most recently knocked out Luis Eduardo Pena in one round, the fifth first-round stoppage of his young career. Ibeh (5-1-1, 4 KOs), a former collegiate football player fighting out of Phoenix, became an instant ESPN favorite with his go-for-broke style. In his last two bouts, the 6’4, 275-pound Ibeh held unbeaten phenom Guido Vianello to a draw and bested the previously undefeated Patrick Mailata by majority decision.

In other matches streaming on ESPN+:

Former junior middleweight contender Carlos Adames (18-1, 14 KOs), from Santo Domingo, Dominican Republic, will make his long-awaited ring return in an eight-round middleweight fight against an opponent to be named. Adames last fought in November 2019 and lost a unanimous decision to Patrick Teixeira for the interim WBO junior middleweight world title.

Lightweight prospect Eric Puente (4-0), from San Diego, will fight fellow unbeaten Sergio Vega (2-0-1, 2 KOs) in a four-rounder. Puente, who is trained by Robert Garcia, won a pair of decisions last year after more than a year away from the ring.

A pair of highly talented former U.S. amateur stars will make their professional debuts in separate four-round bouts. Troy Isley, from Alexandria, Va., is scheduled to fight Bryant Costello (1-1, 1 KO) at middleweight, while Las Vegas-born bantamweight Floyd “Cashflow” Diaz will fight Fernando Macias (1-1). Diaz made headlines in 2010 as a six-year-old when his flashy mitt work routine was shown on an episode of HBO’s “24/7 Mayweather-Mosley.”