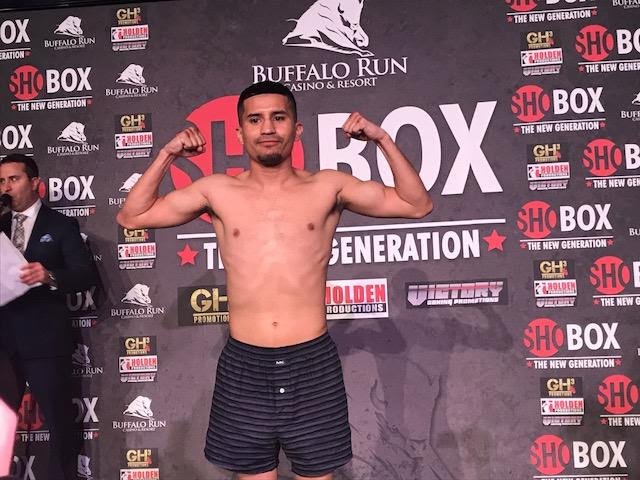 Super Bantamweight contender Adam Lopez is looking to getting back to the perch of being on a short list to fight for a world title.

Back on January 20th, Lopez was right there when he took on Daniel Roman in what was a WBA title elimination bout in Atlantic City.

Unfortunately for Lopez, he came up on the short end of that fight, but Saturday night he returns to Atlantic City when he takes on Jorge Diaz in an eight-round bout for the WBC Fecarbox Super Bantamweight title at The Claridge Hotel.

The show is promoted by Rising Promotions, Greg Cohen Promotions and Winner Take All Productions.

Lopez of San Antonio, Texas has set up his 2nd training camp in Northern New Jersey under trainer Wali Moses.

Lopez is promoted by GH3 Promotions

“Camp was good. I am just taking off the last few pounds. I take my weight off slowly, and be comfortable, and then I rehydrate the right way,” said Lopez.

Lopez knows a win over the tough Diaz would get him right back in contention in the 122 pound division.

“I think a win gets me back to the place where I was at before the Roman fight. I will be knocking on the door of a title fight.”

“Diaz is a rough fighter, and I expect a tough fight from him. He has some good wins, and even though he has lost a few fights, four of them have been to undefeated fighters and the other was to a fighter with one loss, so I expect and I am preparing for the best Jorge Diaz.”

“I just want everyone to come out on November 18th, and I will put on a good show.”

Raymond Serrano (23-4, 10 KOs) takes on Enver Halili (10-0, 3 KOs) in a ten round welterweight clash for the WBC Fecarbox Welterweight title.