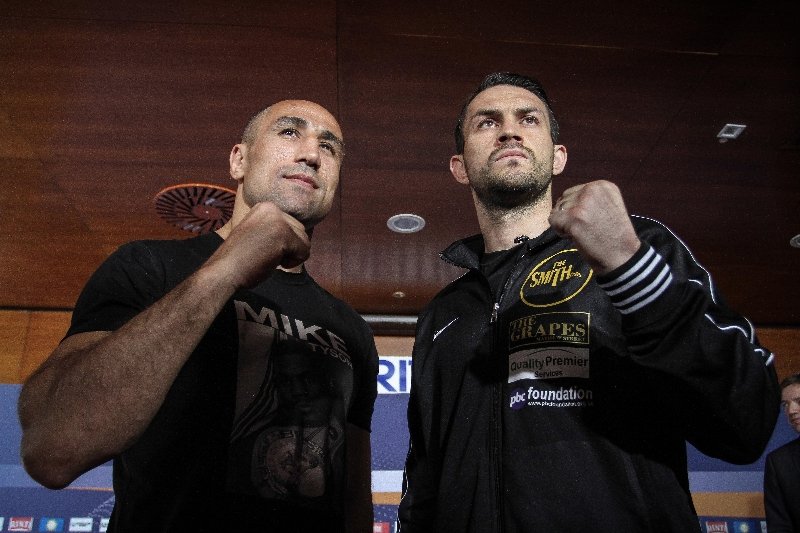 At today’s final press conference the WBO Champion revealed his future is bound to that of his legendary coach Ulli Wegner and made clear his plan to prove his worth by stopping Smith at the Sparkassen-Arena. ‘’When Mr Wegner decides to call time on his career, I will follow him,’’ said Abraham. ‘’I wouldn’t want to train with anyone else. On Saturday it is my job to show him that there is still much more we can achieve together. I will do this by beating Smith in style.’’

‘’Arthur has the ability to beat anyone in his weight class,’’ said Abraham’s 72 year-old coach Wegner. ‘’He just needs to live up to his potential. The most important thing for him to do is follow my instructions. If he listens to what I tell him the fight won’t go the distance, he will knock Paul Smith out!’’

Smith will be counting on the support of his 2,000 travelling fans when he attempts to cause an upset by dethroning ‘King Arthur’ on his home turf. ‘’This is my first and last chance to become World Champion,’’ said Smith. ‘’I will not let this opportunity slip through my hands. I have had the best training camp ever and my coach Joe Gallagher has devised the perfect game plan. Now it is up to me. I’m going to grab this opportunity and the title with both hands!’’

‘’Arthur is a tough nut to crack,’’ said Smith’s coach Gallagher. ‘’But Paul has reached new levels in training and I believe he has the power to force an early stoppage. There are going to be fireworks from the first bell to the last. This could well be a contender for fight of the year.’’

The WBO World Super Middleweight showdown between Abraham and Smith will be shown live on Sky Sports. Tickets are available via eventim.de.

Abraham: I’m ready to defend my title on Saturday night

WBO World Super Middleweight Champion Arthur Abraham (40-4, 28 KOs) and challenger Paul Smith (35-3, 20 KOs) treated fans to a public workout today at the CITTI-PARK shopping centre ahead of their world title fight on Saturday night at the Sparkassen-Arena in Kiel, Germany.

The challenger was up first joined by coach Joe Gallagher. ‘’This is the fight I have been dreaming of,’’ said Smith. ‘’Now I’m here in Germany, I’m not going to let this opportunity pass me by. This is my time! I will be bringing the belt back to England with me.’’

Abraham received a hero’s welcome when he entered the ring alongside legendary coach Ulli Wegner. ‘’I have not underestimated Smith,’’ said ‘King Arthur’. ‘‘If anything, I have overestimated him. I always expect to face the best when I step into the ring and prepare accordingly. I’m in top shape and ready to defend my title on Saturday night.’’

Polish cruiserweight Mateusz Masternak and former world title challenger Matthew Macklin could also be seen at today’s public workout. Both men are in action on Saturday night on a bumper bill featuring a host of Europe’s hottest boxing talents.

The WBO World Super Middleweight showdown between Abraham and Smith will be available to watch live on Sky Sports. Tickets are available via eventim.de.