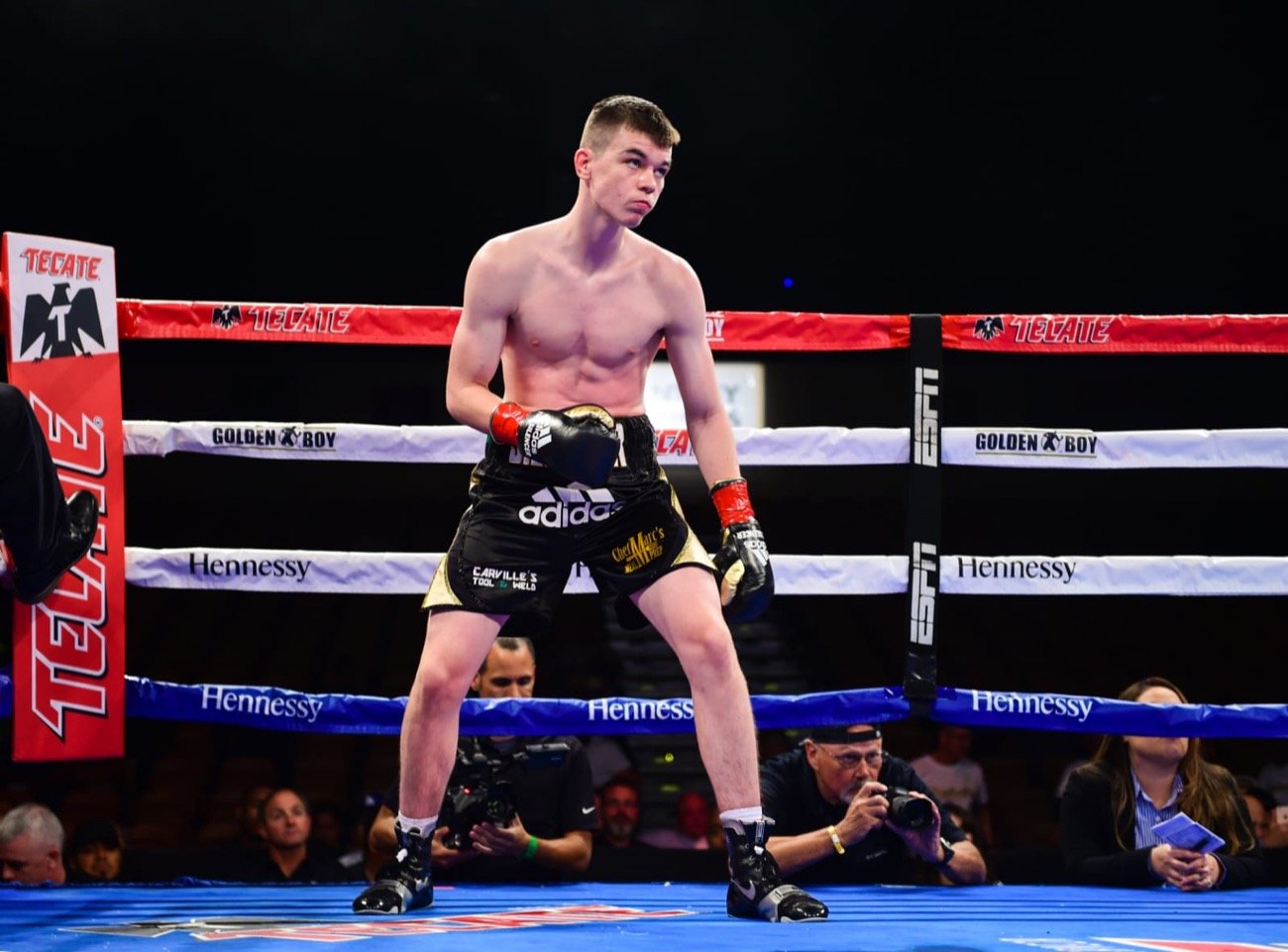 Hailing from Smithsborough, Monaghan – the same county that gave us ‘Clones Cyclone’ Barry McGuigan and Mike Tyson slayer Kevin McBride – California-based Stevie has seen ‘the full ten’ tolled over all five opponents since his pro premiere back in April 2019. Four victims folded in the first round, the other was culled for the count just 29 seconds into round two.

‘People at the US gyms, nicknamed me ‘The Hitman’ after watching me spar. They said I was tall but exciting, just like Tommy Hearns,’ claims the lofty 6ft welterweight who features on the show courtesy of Sheer Sports.

‘I think it first became apparent that I was blessed with real natural power when I started fighting at Under 18 level. I started to hurt a lot of guys and administered many standing counts and stoppages.

‘My height at the weight certainly helps, Like Hearns, I use my reach to keep the opposition at arm’s distance and I can keep generate serious leverage. Since relocating to the US two years ago, I feel I’m getting stronger and stronger every single camp. Years of hard work has also played its part.

‘I’ve a vicious overhand right which has hurt a lot of people but I’ve plenty of selection; any wee shot I land. I punch very hard with both arms and try to take opponent’s heads off with every punch I throw.

‘Outside the ring, I’m very humble and respectful. Obviously, you hope both fighters get out of the ring safely but I have to confess that a brutal knockout leaves me buzzing. I’ve not left anyone badly unconscious. The one’s that have been down for minutes have usually been ‘done’ by body shots.’

And savage Stevie is far from a ‘one trick pony’. Numerous Irish amateur titles, a gold medal at the Commonwealth Youth Games plus a silver at the 2015 European Youth meet (both as a 5ft 8in light-flyweight!) strongly suggest ‘The Hitman’ carries the skill set to supplement his violence.

Alongside younger brother Aaron and father Fergal (his co-coach), Stevie is based in Woodland Hills, California but is presently isolated in his homeland due to the Covid travel embargo. Previously schooled by three-time Ring Trainer of the Year Robert Garcia, he is now mentored by legendary Hall of Fame fight professor Freddie Roach at the Wild Card gym in Hollywood, where he profits from sparring of the highest grade.

He says: ‘I always fully prepare to go the distance. Fans haven’t seen this yet because my pro fights have been so short but I never tire in sparring with the likes of (WBO/WBC super-lightweight boss) Jose Ramirez and (two-time world title challenger) Jose Zapeda. Those spars are far, far tougher than being in a fight. That’s where the learning happens. So any time I can deliver a quick knockout on fight night, I’m gonna take it.

‘I even sparred Vasyl Lomachenko. He needed southpaw opposition for his fight against Jose Pedraza so I pretended to be southpaw just to secure the spar! I did five rounds with ‘Loma’ – all southpaw – and it took him at least the first three to figure me out. I’m quite ambidextrous and like to switch, anyway. That was an unbelievable experience.’

Presently stranded on the European side of the drink, the Brothers McKenna are wisely utilising their enforced ostracism to expand their UK fan base.

‘Whilst there’s the travel ban, I want to get as many fights and as much exposure in the UK as possible. It’s great that Mick Hennessy is providing me with back-to-back fights this month, live on Channel Five so the whole of Britain and Ireland can see me. I’m happy to fight every month if I get the chance,’ says Mogadon man Stevie whose five fight paid career has totalled less than 11 minutes!

‘In time, I’ll fight for whatever title my team believes is best. Though I hold an Irish passport, Dad’s from Derry so I’m eligible for the British. I won a Commonwealth Youth Games gold medal as an amateur and The Irish and European belts also appeal. The leading British and Irish guys need to keep an eye out for me.’

‘It was different to what I’ve become used to but I boxed all around the world in amateur tournaments with very sparse crowds. I actually enjoy it. I can hear very shot thud home, hear every wince from my opponent!’ he quips.

And ‘The Hitman’ promises to re-light the touch paper when he resurfaces against Plymouth’s experienced Des Newton this Friday.

‘I’ve been preparing under my dad in a gym at the back of our house. It has a full size ring, a treadmill, all the equipment we require. We’ve had guys come to us for sparring and we’ve also been over to Dublin,’ disclosed McKenna who is also scheduled to appear on promoter Hennessy’s Channel 5 the following week on the undercard of the British Light-Heavyweight title clash between Shakan Pitters and Craig Richards.

‘Everything is spot on for another explosive performance. Fireworks, live on Five! I think UK fans will enjoy my exciting style; old school boxing where the best want to meet the best. I intend to put on a spectacular show every time.’

Aaron Mckenna: “How Good We Will Be A Few Years Down The Line With Freddie Roach Behind Us?!”

They might call unbeaten Monaghan super-welterweight Aaron McKenna ‘The Silencer’, but the classy 21 year old box-fighter intends kicking up an almighty rumpus when he makes his UK debut on Friday.

And the U.K fight fraternity certainly won’t want to miss taking a butchers at the highly touted former two-time European champion (Schoolboy and Cadet) who has already got the US cognoscenti raving.

‘Outside the ring I don’t say a lot. I’m a different man, humble. But inside, I shut a few mouths, silence opponents. I produce the goods inside the ring, take opponents out of there,’ states 6ft 2in Irish ace who, though two years younger than his crunch-punching brother Stevie (5-0, all count outs), actually made his pro bow 16 months earlier and can boast five more fights and 25 extra pro rounds on his resume.

Six of Aaron’s victims were sent for an early shower (all since three rounds) while five were subjected to the full 10 count.

‘It’s in our nature to get rid of opponents as soon as we can,’ continues Aaron who warns of further carnage ahead.

‘Stevie and I have been sparring each other since I was six and he was eight. We’d go at it every day. Occasionally it got heated but Dad made sure it didn’t get out of control. I can vouch that Stevie punches frighteningly hard.

‘As a pro, I’ve boxed a bit more. Fans haven’t fully seen it but, once I fill out, fully get my man strength, more spectacular kayos will come. There’s no better feeling than sinking a man with a left hook to the body.’ 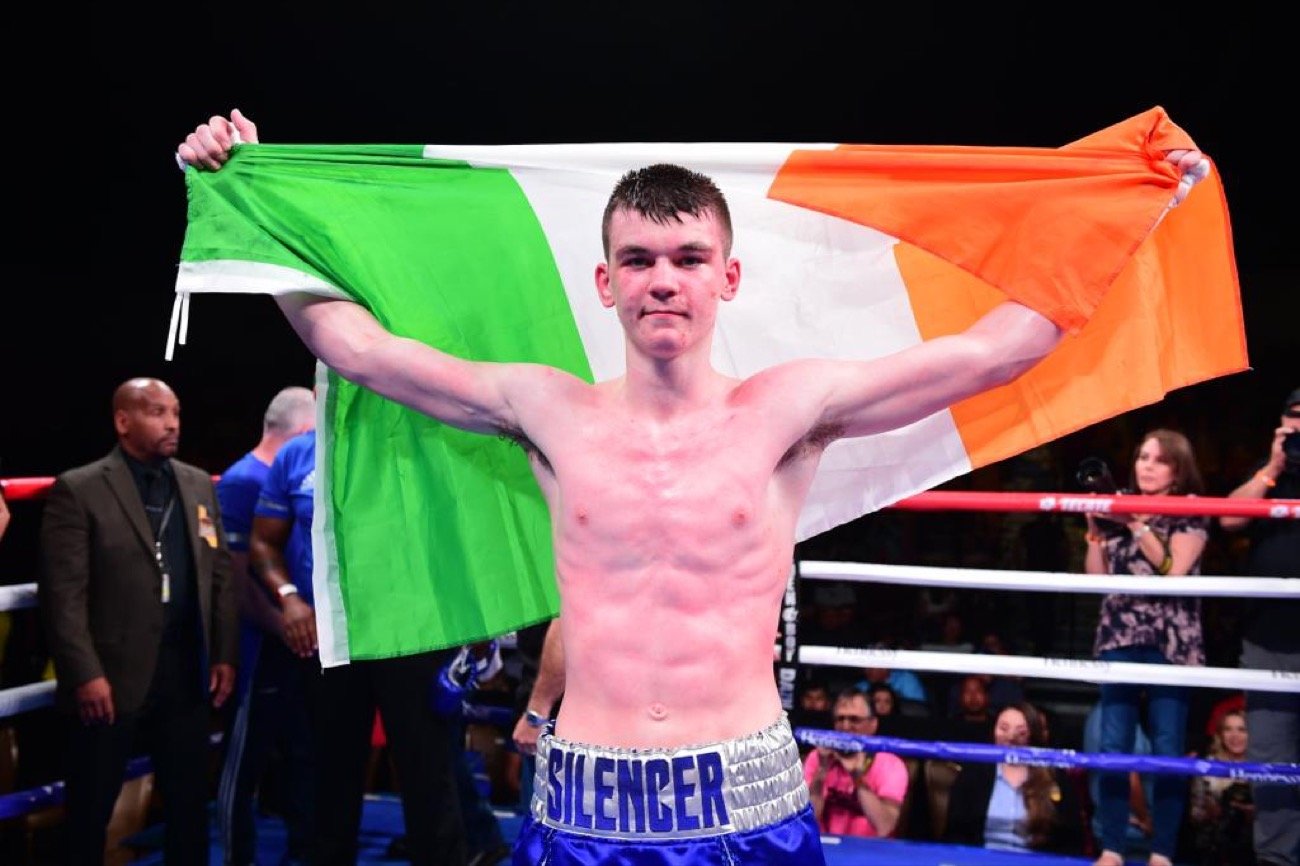 Born in Smithsborough, County Monaghan, McKenna the Younger had long been feted as a 2020 Irish Olympian but, aged just 18, spurned the opportunity in favour of a pro contract with Oscar De La Hoya’s Golden Boy Promotions.

‘I actually did well in school but I always, always wanted to be a professional world champion,’ explains the lad who triumphed in 152 of his 161 contests in a singlet.

‘Even as a top amateur, I never boxed around. I developed a pro style and knew that longer pro fights would suit me better. I’m always as fit in the last round as I am in the first and that’s with me sustaining a very high pace.

‘In my final amateur tournament, I won a mini world championship in Russia. I fought four times in four days, beating both a Russian and the Uzbek world champion along the way.

‘But it was my dream to make it as a pro in the US and so many world champions were based around the California area. I first went over aged 16 and dabbled with the thought of turning pro immediately under a Mexican licence. I opted against that but turned pro shortly after my 18th birthday.

‘Oscar is a great man, a gentleman now and one of the best promoters in the world. But, in his time, he was one of the most vicious fighters there’s ever been and I watch a lot of his tapes. He has seen all my pro fights and gives real positive feedback and advice before and after every one which I always try to act on.’ 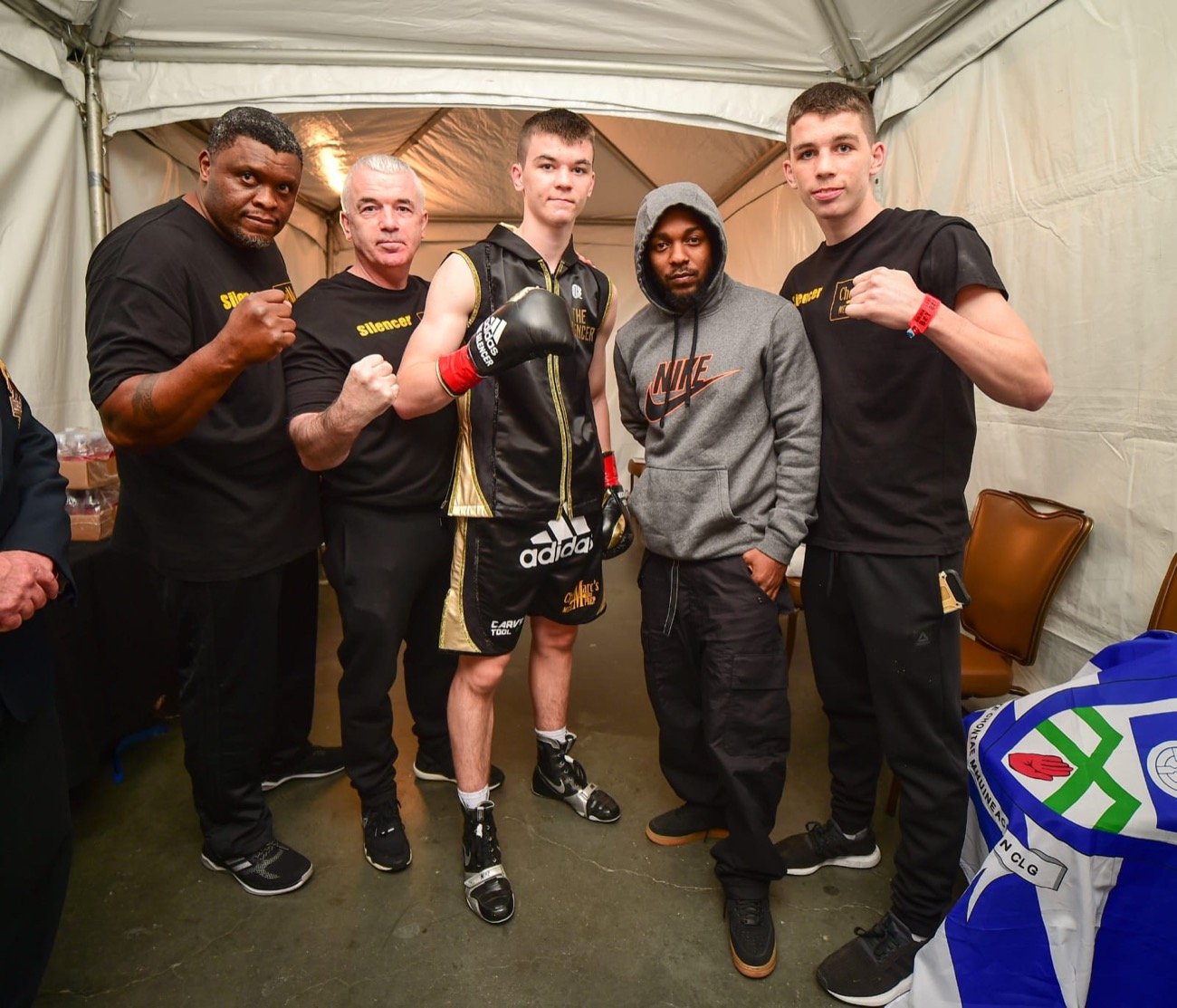 Though Aaron’s class was patently evident, it was still a brave and bold move to uproot and kick start his pro innings in the austere and unforgiving fight factories of America’s West Coast.

‘Stevie and I are very lucky that we have each other and our dad (co-coach Fergal) for support and company because it’d be very hard for a talented British or Irish teenager to succeed over here on their own. It’s not a holiday camp. I’ve sparred world class guys like Jose Ramirez, Jose Zapeda, Ivan Baranchyk, Vergil Ortiz and Amir Khan. They don’t mess around in these top US gyms,’ claims McKenna.

‘Freddie takes us on the pads every week day, and oversees our bag work and sparring. How good will we be a few years down the line with him behind us? Before that, we worked out at Buddy McGirt’s Gym – Buddy’s a really nice fella, extremely knowledgeable – and Robert Garcia also trained us and worked our corner for a few fights but, unfortunately, the two-hour drive to his gym became too much.’

Aaron’s explosive antics between the ropes have even started to court attention with the glitterati around Tinsel Town.

He explains: ‘(Singer)Cyndi Lauper actually requested a selfie from me after I boxed on a Sugar Ray Leonard Charity Fight Night. We’ve bumped into (legendary hip-hop star) Kendrick Lamar a few times at the gym – he loves to watch our sparring – and we’ve have had a couple of proper chats with (actor) Adam Sandler.’

Upon entering the paid brigade, the silent one set a goal of securing a major world title strap by the age of 22. Thus far, Covid 19 has served as the stiffest opponent to realising his ambition.

‘This year was meant to be massive for me but the pandemic came,’ explains Aaron.

‘Now Mick Hennessy has kindly given me an opportunity to show UK audiences what I can do. Over the next 12 months, I’ll cram in as many fights as I can and still intend being world champion by 22. The current WBO champ Patrick Teixeira is also with Golden Boy so it’s an easy fight to make.’

With Channel 5 cameras reeling, McKenna is accorded a gilt-edged opportunity to showcase his considerable talent on a fresh continent.

‘U.K fans will witness a very experienced fighter,’ he concludes.

‘I started at six, was a highly accomplished and decorated amateur, who’s already had 10 pro fights and all the very best sparring you can get. Most boxers in their late 20s don’t have the experiences I bring.

‘I don’t know who my opponent is but I do know that I’m more than ready. I want to put on a great performance in an exciting fight and hopefully get another knock out. I’ll certainly get the job done in style.’ 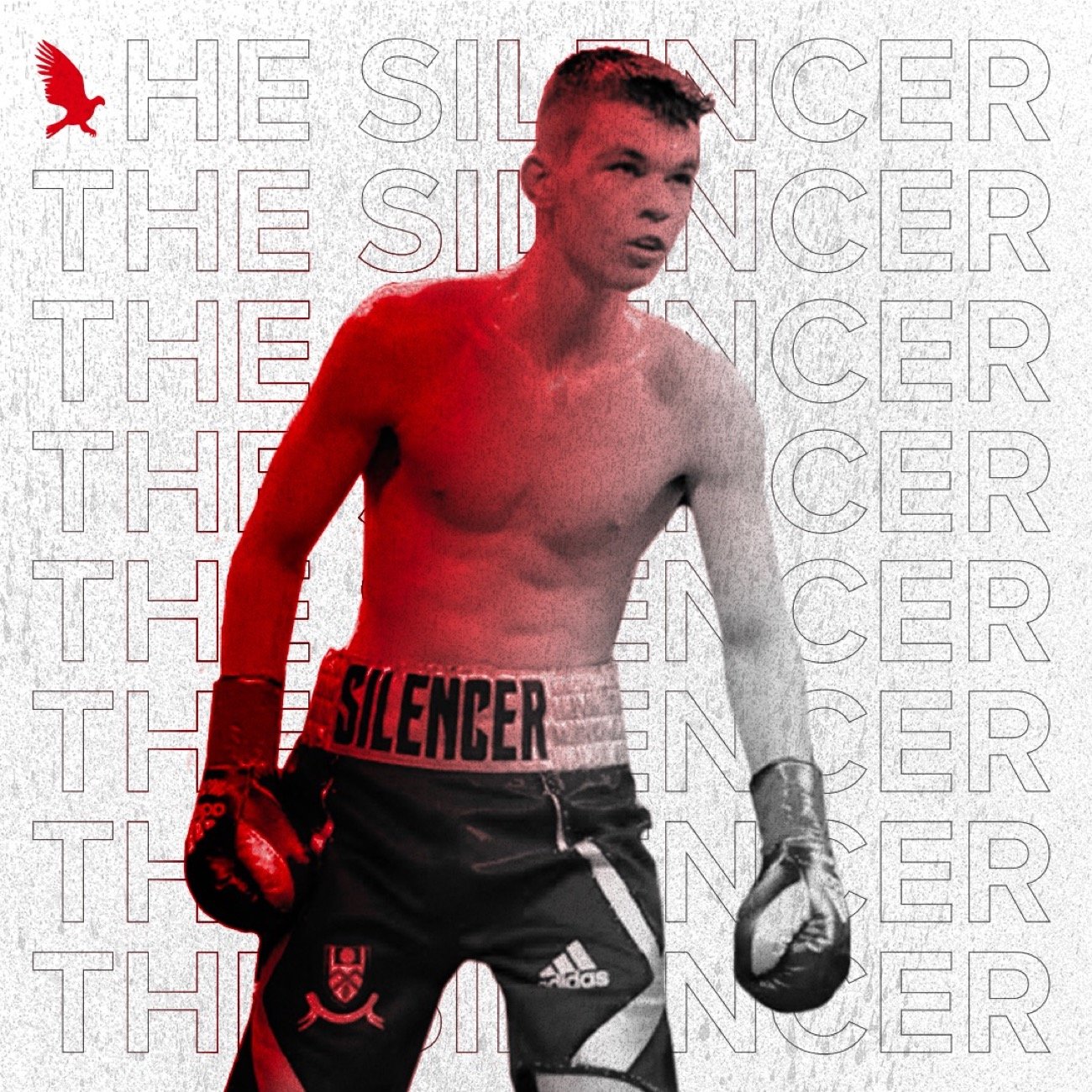