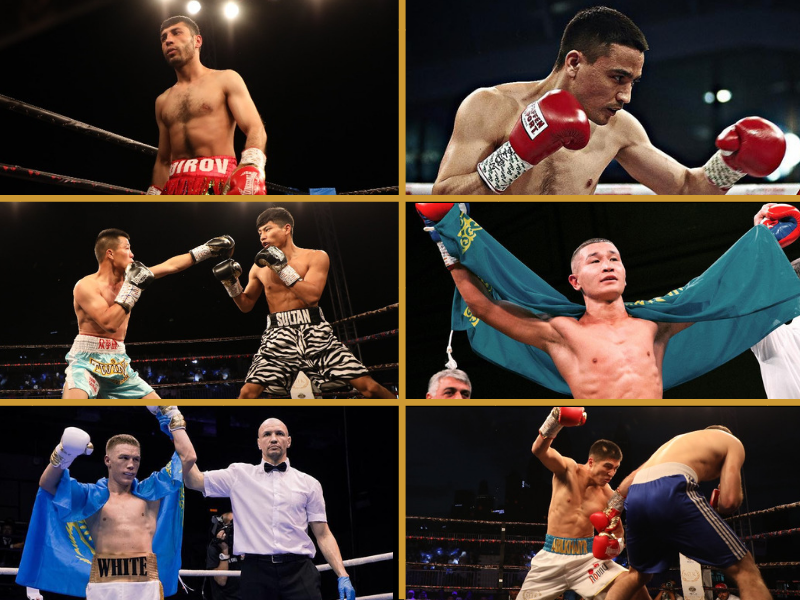 The ground-breaking #DXBUncovered show in Dubai provided the stage for debutant Zoirov – an Olympic champion – to stun spectators with an 18-second stoppage win. If there was any doubt as to how fast the diminutive Uzbek is capable of rising in the paid ranks, that’s how long it took to dispel.

And all that after Kazakhstan’s Shegaliyev had also dismantled his man inside a single round. Not to be outdone, Zaurbek duly brought the crowd to its feet again with a highlight reel KO of his own against China’s valiant Chenghong Tao.

All three were brutal displays – not just in terms of the weight and velocity of the punches thrown but in their pinpoint accuracy and devastating technique.

With Zaurbek already delighting Sky Sports subscribers on multiple Matchroom shows, his Kazakh compatriot and close friend Azhbenov battering his way to 4-0 with ease, Uzbekistan’s Tojibaev producing a clinical debut stoppage the previous week and Kotochigov already 8-0-KO4 and Shegaliyev 3-0-KO2, the region may be set for a golden era.

The technical level of Central Asian fighters is no surprise given their success in amateur competition; Zoirov’s 2016 Rio Games gold is by no means the only palpable proof of their prowess.

Two-time Olympian Tojibaev, who seized a medal at the Asian Games, became AIBA world champion before turning professional. Zaurbek won the Asian Games and a medal at AIBA world youth level. Both he and Azhbenov, who along with Kotochigov and Shegaliyev also boast multiple amateur medals, beat Olympic champions.

MTK Global’s fast-growing #MTKFightNight series will provide the sextet with ample opportunities to showcase their potential to UK-based fans in attendance and a much wider audience tuning in through the iFL TV and ESPN+ broadcasts.

Next up is the menacing prospect Kotochigov; an Almaty resident who looks to secure a hat-trick of consecutive knockout wins and move to 9-0 on the #MTKFightNight at London’s famous York Hall on April 26.

Andrew Robinson has travelled to Poland and ripped the ‘0’ from Damian Jonak on Saturday evening.

The IBO Continental Middleweight Champion defeated Jonak, who went into the fight with an impressive 41-0-1 record, by split decision in Katowice after eight absorbing rounds.

Robinson started well as he established his jab and made his superior reach count. 36 year-old Jonak hit back and enjoyed some success in the second and third stanzas as he persevered with his double jab, overhand right combination. As the bout wore on, Robinson got to grips with the stocky Pole’s one dimensional attack.

Claiming centre of the ring and picking his shots well, the Birmingham boxer finished the fight strongly.

Surprisingly given the fight was in Jonak’s home country, but deservingly, Robinson picked up a memorable split decision.

“I am so happy,” he told bcb-promotions.com. “It’s been a long camp and Jonak’s been my focus for many months. I knew, and my team knew, I could come to Poland and get the win.

“I’m the most dangerous Middleweight in Britain. I’ve come over her and beaten a fighter who hasn’t lost in 42 fights.

“I’m always fit and always ready. I will fight anybody. This is a statement. Bring on the next big fight.”