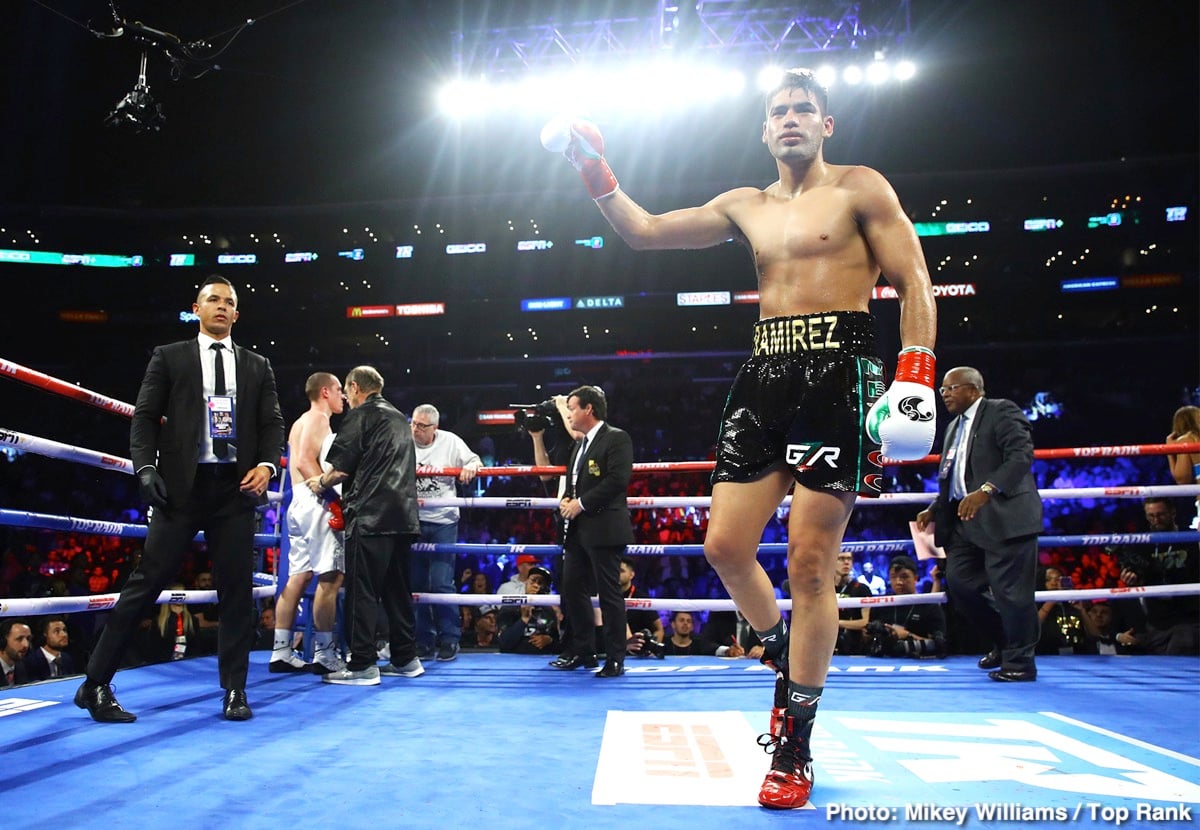 Undefeated Gilberto “Zurdo” Ramirez (42-0, 28 KOs) feels he’ll get his first World light heavyweight title shot because he believes in himself, his promoter Golden Boy Promotions, and his Mexican heritage.

After Ramirez’ recent knockout victory over Sullivan Barrera (22-3, 14 KOs), positioning him for a World title shot, the boxing world looked forward to “Zurdo” challenging World Boxing Association (WBA) Super Light Heavyweight Champion Dmitry Bivol later this year. Bivol had all but assured a showdown with Ramirez through social media posts, but suddenly he changed his tune and was dreaming of a match this November that isn’t going to happen against WBA and WBC Super Middleweight Champion “Saul “Canelo” Alvarez (56-1-2, 38 KOs).

The 30-year Ramirez has openly called for a fight with Bivol or either of the other World light heavyweight title holders, Artur Beterbiev (WBC/IBF) and Joe Smith, Jr. (WBO), whose rumored unification fight doesn’t appear to be on the horizon.

Meanwhile, all three reigning World light heavyweight champions have gone dark, at least in terms of fighting Ramirez. Is “Zurdo” too risky for them, or are they just hesitant to fight a proven Mexican challenger?

“I leave my opponents to my promoter, Golden Boy, and its matchmaker, Robert Diaz,” Ramirez explained. “They’re aware of what I want, and I trust they are diligent and will do whatever is best for me. As a fighter, I’ve been clear that all the World light heavyweight champs are on my hit list; and I don’t retract my statement or shy away from the fights as most of them have. In this world, all I have are my word and balls, and I don’t break ‘em for anyone. I fight not just for myself, but for my pride and the spirit of Mexican people. We are proud of our heritage and have been the best fighters. Russians know I will take out both Bivol and Beterbiev; Joe Smith, Jr. is just an appetizer.”

“Canelo” and Julio Cesar Gonzalez (2003) are the only native Mexicans to be crowned World Light Heavyweight Champions, but everybody in boxing knows Mexican boxers are called warriors for a good reason.

Read:  Foster vs Cunningham on October 9, live on BT sport

“I think they’re all reluctant to fight a Mexican light heavyweight like me,” Ramirez added. “There’s a reason why Bivol is retracting his statement and staying quiet after all his social media antics. If he was serious, it’s an easy fight to make, and he knows it (both fighters have fought on DAZN). I’m also hearing (Joshua) Buatsi’s name in the mix, but I would absolutely destroy him. All these guys talk the talk but rarely walk the walk. I am a Mexican warrior; everybody knows the way we are built!”

Other potential contenders in the mix, excluding the reigning world champions, may include Badou Jack, Eleider Alvarez, Maxim Vlasov (Ramirez defeated him as super middleweights), and Lyndon Arthur.

“My time will come, Ramirez concluded. “I know Golden Boy is working hard on making this a reality and when that time comes, all these guys will have nowhere to run or hide. I leave who I fight next up to my matchmaker, Robert Diaz. I trust that Golden Boy will do whatever is best for my career.

“I’m not frustrated, this is part of the process. I’m a veteran in this game. Many will talk, but they will fall when it’s time to act. Again, I trust Golden Boy will do what has been promised and I look forward to what fight they will present me with.”

Undefeated Gilberto “Zurdo” Ramirez (42-0, 28 KOs), the first Mexican boxer to capture the World super middleweight title, is now the World light heavyweight champion in waiting. “Zurdo” is currently rated No. 2 by the World Boxing Organization (WBO) and No. 5 by the International Boxing Federation (IBF).

After Ramirez’ recent knockout victory over Sullivan Barrera (22-3, 14 KOs), it appeared that the boxing stars had aligned and “Zurdo” would challenge WBA Super World Light Heavyweight Champion Dmitry Bivol later this year. It still may happen, however, Bivol has offered to replace Caleb Plant next month against WBA and WBC Super Middleweight Champion “Saul “Canelo” Alvarez (56-1-2, 38 KOs) at either super middleweight or light heavyweight.

The 30-year Ramirez understands why Bivol would challenge “Canelo,” and he still welcomes a fight against Bivol, or either of the other World light heavyweight title holders, Artur Beterbiev (WBC/IBF) and Joe Smith, Jr. (WBO), scheduled to fight each other in a unification match this year.

“People may say he is avoiding me by chasing the ‘Canelo’ fight,” Ramirez commented, “but I hope he gets it. Everyone knows ‘Canelo’ is the lottery ticket. At the moment I can’t hate on him (Bivol) for taking his shot. But, if the fight doesn’t happen, he and his team know I’m available and there won’t be any other fight or excuse to avoid me. I’m open to fighting any of the World champions in the light heavyweight division. I’ve always said I’m the best in the division and there’s no one I wouldn’t fight for the title assuming all the other variables align.”

“Zurdo” never really gets out of shape. He’s back home in Mazatlán (Mexico) running, doing yoga, golfing, and doing a little bit of boxing.

“As I get closer to my fight news,” Ramirez remarked, “I’ll start my pre-camp to make sure I’m at my target weight before even entering training camp. It’s not like my teenage years, so I need to make sure everything is precise and on track before camp.”

For his most recent fight versus Barrera, Ramirez trained at his ultramodern Brickhouse Boxing Club in North Hollywood, California, in which “Zurdo” is a member of the 3PM Group ownership. Ramirez reports the gym is running smoothly and that he’s happy it’s a community space where a lot of professional athletes train such as fighters David Benavidez, Gerald Washington, Cem Kilic and John “Scrappy” Ramirez (no relations), as well as UFC fighters TJ Dillashaw, Giga Chikadze and Marvin Vettori, among the more notables.

“I’ve known Bivol from before (they sparred) and he’s a tough fighter with a warrior mentality,” Ramirez concluded. “I just hope he’s not just a talker and doesn’t retract from calling me out publicly on social media and announcing it to the world. Everyone knows it’s an easy fight to make (Ramirez and Bivol have fought on DAZN). I know nothing on my side (Team Zurdo & his promoter Golden Boy) is holding it back from making it happen.”