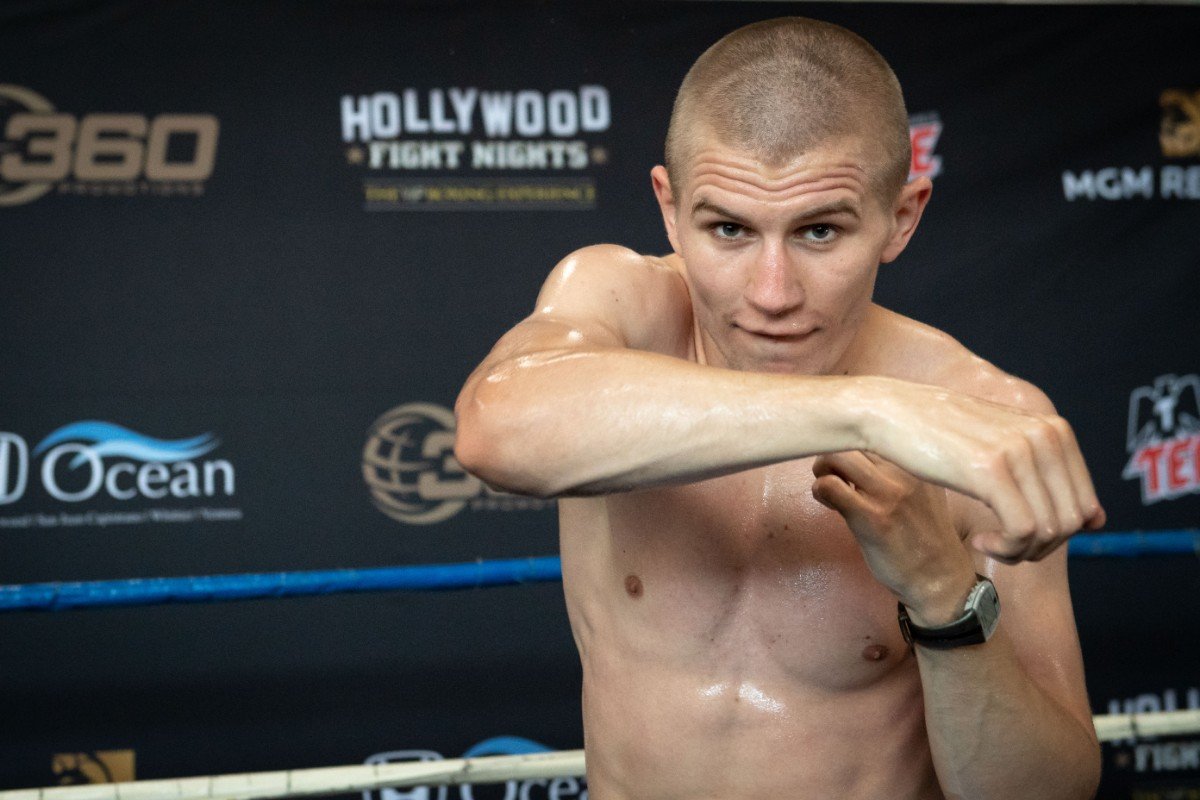 360 Promotions hosted Open to the Public Media Workouts on Monday afternoon for their Hollywood Fight Nights event set for this Sunday, July 28, 2019 at the famed AVALON. Among those in attendance were Fast Rising Super Welterweight Star, Serhii ‘El Flaco’ Bohachuk, (14-0, 14 KOs) along with his trainers Abel Sanchez and Ben Lira in addition to Tom Loeffler, President of 360 Promotions. Also working out for the fans and media at the South El Monte Recreation Center were 19-year-old featherweight prospect Adrian Corona, (5-0,) of Rialto, CA, undefeated lightweight Mario ‘El Matador’ Ramos, (8-0, 7 KOs), and cruiserweight newcomer Marco Deckmann, (2-0, 2 KOs), of North Hollywood, CA.

“I feel terrific, we’ve had a great camp again in Big Bear and I can’t wait to put on a spectacular performance this Sunday night at the AVALON.”

“Abel and Ben tell me to be patient, not to go for the knockout but just to keep the pressure on my opponent and use the skills I have to set up the stoppage. I know how tough and heavy-handed Marin is so I have to fight smart, listen to Abel and Ben and I believe I’ll be successful on Sunday night.”

“After Sunday night I look forward to bigger challenges in the super welterweight division.”

“It’s great to see Serhii, Adrian, Mario and Marco here at the open workouts, all four of them are in tremendous shape and we look forward to another action-packed evening at Hollywood Fight Nights this Sunday.”

“We believe Serhii is ready to take the next step in the super welterweight division and on Sunday night he’ll prove that he is the fastest rising star at 154lbs.”

“Tickets are moving very fast and I strongly encourage fans to purchase their tickets in advance. We’ve got nine terrific fights planned for Sunday night with some of the boxing’s top rising stars.”

“For boxing fans from around the world they can watch the free international stream of the fights on our website and all of the 360 Promotions’ social media channels. The fights will also be telecast live in the UK on BoxNation.”

Just 24-years-old, Bohachuk has stayed perfect over the course of his two and half-years as a professional with all of his fourteen opponents being stopped inside the distance. Bohachuk will return to ‘Hollywood Fight Nights’ at the AVALON battling Fernando Marin, (16-3-3, 12 KOs), in the ten-round main event.

‘Hollywood Fight Nights’ will be streamed live internationally on the 360 Promotions’ website, (www.360Promotions.us) and all 360 Promotions social media channels. In the United Kingdom, the event will be telecast on BoxNation.