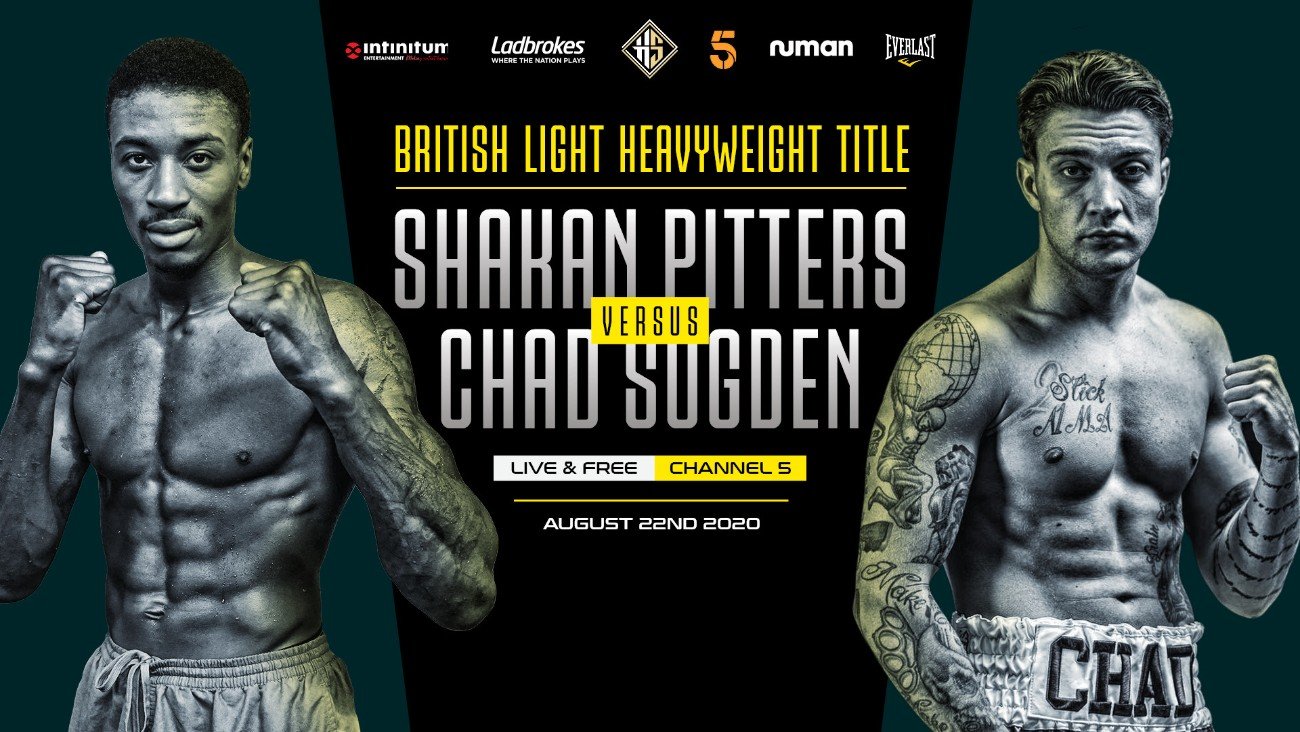 26-year-old east Midlander, Chad Sugden, takes his first step up the championship ladder when he confronts the unbeaten and towering Birmingham Shakan Pitters in a spicy looking showdown for the vacant British title at a purpose built production studio in Redditch on Saturday 22nd August, exclusively live on free-to-air Channel 5.

‘2Slick’ Sugden is a fighting man to the core and hails from one of the nation’s most renowned combat families and is intent on becoming the first man to beat Pitters and claim the Lonsdale belt.

‘My Dad Dean was a world kick boxing champion and I was taking classes in both kick-boxing and boxing from the age of five. My brother Regis is an unbeaten pro welter and another younger brother Bailey is heavily involved in K1, competes in ‘Glory’. We’re a proper fighting family. Don’t mess!’ warns the solid 6ft Sugden who earned his opportunity after just 65 pro rounds and 13 fights (one draw, one loss).

‘I started competing in light contact martial arts at eight or nine, had my first amateur boxing bout at just 11 and pursued both sports alongside each other during my teens. But I always loved boxing more. That’s what I watched on the tele and my idols were boxers as opposed to martial artists. Most of my wins in kick-boxing were down to my hands. I always sparred pro boxers, to keep my hands sharp.’

‘I had 20 odd amateur fights, got beat in a national junior final and won the Senior Midland ABAs. At 17, I didn’t think I was quite ready to box professionally but accepted a pro kick-boxing contract. When the ABA got wind that I was fighting for money they revoked my amateur boxing card.’

Combining fists and feet, chiller Chad scooped an ISKA world title, starred in the US, Middle East, Asia and all over Europe and scored five figure purses.

‘I got used to doing all the press conferences and fighting away from home as an underdog, before huge, fanatical audiences – all experiences that transfer over,’ he states.

‘But I always knew professional boxing was where I wanted to go. The exposure was that much greater. I’d been struggling for a bit with a stress fracture at the bottom of my spine and all the kicking wasn’t helping it. At 21, I finally took the plunge.

‘With boxing, there’s less weapons to worry about, two less limbs to avoid and the martial fights were shorter, five rounds maximum. Though the kick-boxing is a bit jumpy, darting in and out of range, you had to plant your feet for K1 or you get wiped out.’

After converting to conventional pugilism four years ago, Sugden acclimatized with 10 fights against predominantly imported journeymen but has sizzled since stepping up in competition over the past eight months.

However, it was Sugden’s spirited eight round draw against world rated ex British title challenger Craig Richards at the York Hall last December – Sugden’s first fight outside the Midland small halls – that alerted the cognoscenti of his championship credentials.

‘Billy Joe Saunders had broken my nose with a big uppercut in sparring but I couldn’t turn Craig Richards down,’ claims Chad

‘The nose went again in round two and, after that, I just had to focus on nicking rounds. While I can still see and my arms are still working, I’ll fight, man. Craig says he was robbed but no one else was saying that. Though I thought it was close on the night, when I watched it back I thought I edged it by a round.’

Co-coach John Costello, who steered Jamie Cox to a world title challenge, works with Sugden twice weekly at his Birmingham gym and is astonished by the Newark warrior’s innate ruggedness.

He claims: ‘I believe Chad’s the youngest Brit ever to secure a K1 contract and often he’d be required to fight three times a day.

‘He’s very strong physically and ridiculously tough; very resilient and absorbent. Jamie used Chad as his main sparring partner for his fight with George Groves. Jay dropped all the others but just couldn’t catch Chad clean.

‘Then Chad came into the Craig Richards fight on two weeks’ notice without any sparring because of his broken nose. When it went again in round two, he couldn’t breathe through his nose. Lasting the course was a victory in itself.’

Largely unknown before he was pitched with Pitters for the coveted Lord Lonsdale belt, strongman Sugden intends to announce himself spectacularly to the live national Channel Five audience.

‘I’m an old school, all round operator; a slick, aggressive counter puncher who moves well. I fight every fight differently,’ he disclosed.

‘I bring a presence to the ring. I’m very strong. I’m not the biggest knockout puncher but I’ve stopped a few with body shots.

‘I definitely want to defend the belt three times then move on. I’ve aspirations of European and world titles. The British light-heavyweight scene is so strong at the minute. If you’re a player here, you’re a player at world level.’

TV reality star Idris Virgo claims his destined superstardom shall come from cracking lips in the boxing ring rather than kissing them!

Says: ‘My appearance should certainly boost the ratings. The ladies love to lust over my sweaty body!’

London, UK (5 August 2020) Idris Virgo, the 5ft 10in powerhouse from Birmingham with the Colgate smile and marble-carved physique, first courted the nation’s attention when he crashed on to the ITV hit show Love Island in 2018. Installed as a ‘bombshell’, the 27 year old bombed out of the idyllic Mallorca villa without meeting his match, after four episodes.

But the Handsworth-born hunk left quite an impression before he left the island and extensive coverage in the national ‘red tops’ saw his profile soar. He now intends to capitalise by knocking down contestants rather than ‘coupling up’ with them. Although I’m a Celebrity…, Celebs Go Dating and MTV’s The Challenge could be in the offing in the future.

Middleweight Virgo (5-0-1) will next feature on Hennessy Sports’ big show on Saturday 22nd August at a purpose built TV studio in Redditch, behind-closed-doors, headlined with the mouthwatering showdown between Shakan Pitters and Chad Sugden for the Vacant British Light-Heavyweight Championship, exclusively live on free-to-air Channel 5 in the UK.

‘I’m very handsome, a fittie, and I know I’m destined to be a superstar. Boxing will now be my platform,’ says Virgo, who already claims 171,000 Instagram followers.

‘Love Island opened doors and seriously changed my life. With regard to boxing, it’s helped massively with regard to increasing my profile and selling tickets.’

The middle of seven children, Idris’ fighting career, like so many, commenced on the school yard.

‘I was the hardest at my school, quite ‘The Chap’. I was actually a prefect and it does take a bit to get me going,’ he disclosed.

‘But I began boxing at 15,16, long before Love Island. This ain’t no gimmick. I had eight White Collar (bouts), losing just two, plus a dozen amateur which I mostly won. The reason I left the amateurs, aged 25, was the judges robbed me in the Midland Senior ABAs.’

Since sacrificing his vest, the Anthony Hull coached Virgo has conceded just two of the 22 rounds that constitute his unbeaten six fight pro career. While he is yet to register a stoppage win, the muscular middleweight warns us to expect an immediate change.

He says: ‘I’m known as ‘The Body Breaker’. In previous fights, I was content to take my time but now I intend putting opponents to sleep. I’ll set them up then chop ‘em down with body shots.’

Renowned Midlands fight figure Jon Pegg, who manages Virgo, concurs that he certainly has a future between the ropes, provided he can commit the gym hours.

‘Idris is a natural athlete who’d instantly be good at pretty much any sport he embraces. He’s got a very impressive build and puts his shots together well,’ says the likeable Brummie ‘fight face’ who also manages top-of-the-bill Shakan Pitters.

‘Because of that reality TV exposure, Iddy can shift tickets. Though he was cast as the bad guy in Love Island he’s actually a nice kid. He’s very busy doing his videos and stuff but, provided he hits the gym every day, there’s definitely belts in his future.’

Perhaps the only thing bigger than Virgo’s ego, is his ambition.

‘I’m not in this to mess about. I intend winning English, British, European and world middleweight titles,’ states Idris.

‘My appearance should certainly boost the ratings. The ladies love to lust over my sweaty body! Some jealous types will no doubt tune in, in the hope of seeing me get laid out but I guarantee I’ll disappoint them.

‘Because of my profile, every opponent has been desperate to make their name by taking me down but they never come through, Once I clout ‘em, their game plans disappear out the window.

‘When I come through in August, I’ll have another two six rounders before the end of this year against progressively better opponents. I’m targeting a British title shot by the end of next year.’