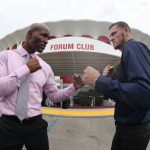 As fight fans know, the great Bernard Hopkins is fast approaching what he calls his final fight, against young and dangerous puncher Joe Smith Junior, who the amazing 51-year-old (52 in January) will fight on December 17th. Who knows if B-Hop, AKA The Alien, AKA The Executioner will really hang ’em up after the Smith fight, win or lose. But we do know that the Philly legend will not have his usual head trainer, of the past 11 years, in his corner for what is being billed as his swansong.

Classic Entertainment & Sports CEO Jimmy Burchfield Sr. Last month, our loyal fans witnessed one of the most exciting fights of this year, or any year, at Twin River Casino when our junior middleweight prospect Khiary Gray rallied with his back against the wall to knock out the dangerous Chris Chatman in the seventh round of their scheduled eight-round main event bout.

It may have come as no surprise when David Haye and Tony Bellew got nasty towards one a other at today’s press conference in London – Haye even chucking a left hook at Bellew as they went face-to-face – but Haye’s scathing attack (of the verbal kind) on promoter Eddie Hearn was a surprise.

When Tevin Farmer and Dardan Zenunaj square off Friday, Dec. 2, at the 2300 Arena, it will mark the 38th anniversary of Peltz Boxing’s first world champion.

The title was brought home by Marvin Johnson, of Indianapolis, IN, who knocked out Mate Parlov, of Yugoslavia, to win the World Boxing Council (WBC) light-heavyweight title in Marsala, Sicily.
Johnson (right) went on to become the first three-time world light-heavyweight champion, winning the World Boxing Association (WBA) belt in 1979 by knocking out Victor Galindez, of Argentina, in New Orleans, and finally the WBA crown again in 1986 when he stopped Leslie Stewart, of Trinidad, in Indianapolis.

In a historic move, Warriors Boxing proudly announces the signing of their first female fighter, Jessica “CasKILLA” McCaskill to a promotional contract.

Luke Paddock has vowed to show everyone his power when he returns to the ring this weekend writes James Eley.

‘Cool Hand’s’ quest for the vacant English Super Lightweight title ended in defeat last time out as Anthony Upton stopped the Bloxwich boxer in the ninth round of a contest that, until that point, had been nip and tuck. 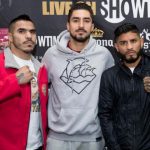 Also in attendance Tuesday at City of Angels Boxing was former title challenger and local fan favorite Josesito Lopez, who competes in a welterweight bout on the undercard. The SHOWTIME CHAMPIONSHIP BOXING telecast begins at 10 p.m. ET/7 p.m. PT and features junior middleweight world champion Jermall Charlo taking on top-rated challenger Julian Williams in a battle of undefeated rising stars in their prime.