By James Eley – Lee Glover is looking forward to some home comforts as he looks to bounce back from two title defeats on the road writes James Eley.

The Tipton Slasher lost to Andy Townend for the English Super Featherweight Title last year before dropping down to featherweight to challenge Leigh Wood for the vacant Midlands Title earlier this year.

In 1977, long before becoming a pro boxer, trainer, gym owner, successful promoter and member of the Maryland and Washington DC Boxing Hall of Fames, Jake Smith was scheduled for his first amateur fight in Maryland. 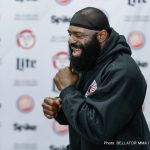 Kimbo Slice has died … TMZ Sports has confirmed. He was 42. Slice was hospitalized early Monday near his home in Coral Springs, FL. He passed away a short time later. The CEO of Bellator MMA confirmed the news … saying, “We are all shocked and saddened by the devastating untimely loss of Kimbo Slice, a beloved member of the Bellator family.’

“One of the most popular MMA fighters ever, Kimbo was a charismatic, larger-than-life personality that transcended the sport.”

New York, NY (6/6/16) – DiBella Entertainment has promoted some of the biggest and most exciting boxing events at Foxwoods® Resort Casino in the last decade and now, the N.Y. based promotional company is proud to announce that it has partnered with Foxwoods to stage a summer boxing series. 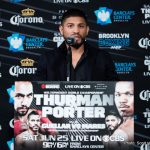 Lou DiBella
Thank you all for joining us. As you know that we have a great fight card on Saturday, June 25, SHOWTIME CHAMPIONSHIP BOXING on CBS presented by Premier Boxing Champions at Barclays Center in Brooklyn.

The main event between Keith Thurman and Shawn Porter for the welterweight championship is one of the most eagerly anticipated fights in all of boxing. And tickets have been selling very, very well.

Popular heavyweight boxer Dave Jones from Sheppey marched on unbeaten with his seventh straight win in Maidstone on June 4th whilst adding the International Challenge heavyweight belt in the process.