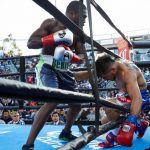 (Photo Credit: Suzanne Teresa/Premier Boxing Champions) Carson, CA (April 30, 2016) – In front a packed house of 7,760 and a nationally televised PBC on FOX and FOX Deportes audience, Andre Berto, (31-4, 24 KOs) turned back the clock and successfully gained his revenge over “Vicious” Victor Ortiz, 31-6-2 (24 KOs) with a stunning fourth-round knockout in a rematch of their 2011 “Fight of the Year” on Saturday night at Southern California’s legendary open-air boxing venue StubHub Center. 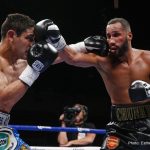 DeGale was supremely accurate, landing 51 percent of his power punches compared to just 23 for Medina, including a staggering 66 percent of his power punches. The switch-hitting southpaw attacked from unorthodox angles, and was most effective when he snuck in a right uppercut to back up Medina. But the British titlist – a record 12th from Great Britain – failed to utilize his jab and was not able to deliver on his prediction of a knockout inside of six rounds. 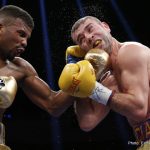 Badou Jack retained his WBC Super Middleweight title in a controversial draw against Lucian Bute Saturday on SHOWTIME, setting up a fall unification with IBF champion James DeGale, who defended his IBF crown against Rogelio Medina in the opening bout of the SHOWTIME CHAMPIONSHIP BOXING telecast from the DC Armory.

“Let’s unify the decision and see who the best is,” DeGale said to Jack in a post-fight interview moderated by SHOWTIME Sports reporter Jim Gray.