Kell Brook says he has just two weeks to wait until he fulfils his World title destiny when he faces IBF Welterweight champion Shawn Porter on August 16 at the StubHub Center in Carson, California live on Sky Sports.

The ever-entertaining Brandon Rios has promised to produce his old sparkle as he battles Diego Chaves in a ‘do or die’ contest this Saturday night.

Welterweight star Rios takes on the big-hitting Argentine Chaves this weekend, live and exclusive on BoxNation, and has vowed to get back to winning ways as he looks to bounce back from two defeats on the trot against Manny Pacquiao and Mike Alvarado.

“We’re just going to give the fans what they want. They’re going to see a nice little war in the ring as long as it lasts and it’s going to be a tremendous fight,” said Rios.

“I know he has tremendous skill and punching power, but I have punching power too. And I do have some skills, kind of. But we’re ready 100%.

In another example of fierce rivals coming together at the Nevada Boxing Hall of Fame Induction Ceremony/Dinner, Sugar Ray Leonard has announced he will not only attend the Induction of Panamanian Roberto Duran, but join him on stage. The magical evening, which also includes the bringing together of Evander Holyfield and Mike Tyson, will take place Saturday night, August 9 at the Cohiba Ballroom inside The New Tropicana, Las Vegas. 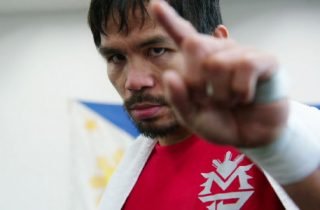 The pair clash in Wolverhampton tonight and with 34 knockouts between them, it’s got all the ingredients of a war. 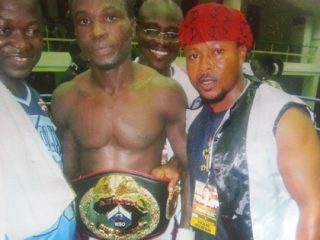 World title chasing Ghanaian boxer, Theophilus Tetteh gets the chance to edge closer to his childhood dreams when he faces Rhys Pagan of Scotland in a final eliminator for the Commonwealth Light Middleweight title on September 21.

Now he gets the opportunity to announce himself to the world before a UK audience against the 21 year old Pagan at the Miners Welfare Club, Cleland, Scotland on a Prospect Boxing Promotions bill on the night of Ghana’s Founder’s Day. 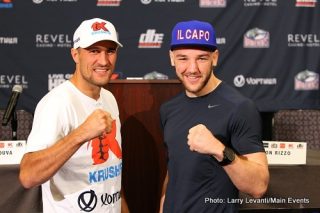 Rios claims that he has returned back to earth after his head was stuck in the clouds of success. Alex Ariza is gone from his camp, now he and his world renowned trainer Robert Garcia are going back to the basics. Strength and condition coach or not, Rios better have been on his best behavior to prepare for a hungry and dangerous fighter like Chaves.

Diego Chaves has a snappy jab and loves to throw chopping hooks to the body and head. He favors his left hand for lead hooks and has a decent overhand right to go with it.

The thought amongst fans and media who are picking Chaves are banking on his movement. I question Diego’s capability to outbox Rios only because he hasn’t shown that trait at a high level. He pressed the action for the most part in a loss to Keith Thurman, and in a close victory over Omar Weis. When he was pushed back in both of those fights, he looked very uncomfortable making him vulnerable to a hunter like Rios.

New England Fights (NEF), the Northeast’s premier fight promotion, today announced that the company will bring the first professional boxing event to Lewiston, Maine since 2004. The show, which will mark the fight promotion’s sixteenth in the state of Maine, is scheduled to take place on Saturday, October 11, 2014 at the Androscoggin Bank Colisee with a bell-time of 7:00 pm EDT. The NEF company came to prominence in 2012 when it began promoting mixed-martial arts (MMA) events in Maine, primarily in Lewiston. Known to attract massive crowds of 2,500-3,000 to its events, NEF is widely-recognized as one of the most popular and successful regional promotions in the entire country.