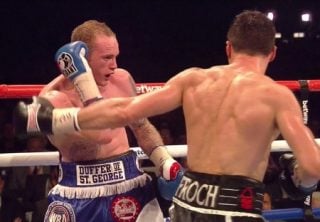 HBO commentator Roy Jones Jr. says that he recommends that IBF/WBA super middleweight champion Carl Froch (33-2, 24 KO’s) go in the direction of former WBC middleweight champion Julio Cesar Chavez Jr. for his next fight rather than Gennady Golovkin, as Jones Jr. feels that with the mistakes that he saw in Froch’s game last night in his win over George Groves (19-2, 15 KO’s), that he would be taken advantage of by Golovkin if he were to fight him next.

Froch has an optional title defense available for his next fight, and his promoter Eddie Hearn reportedly has been in talks with Top Rank for a fight between Froch and Chavez Jr. for the fall. It would seem that Hearn likes the idea of Froch fighting someone as popular as Chavez Jr. There’s been no talk of Hearn reaching out to K2 Promotions for a fight against Golovkin though.