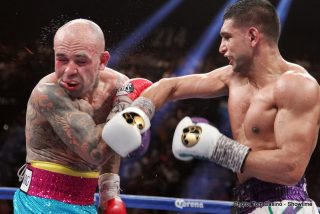 Returning from the 2004 Olympic games in Athens was a 17 year old boxer from Bolton, whose performances there belied his juvenility and gained him the adoration of a nation. Amir ‘King’ Khan’s star could not be higher back in his home country and, after defeating the man who defeated him in the Olympic final, the professional ranks beckoned with a huge amount of potential being seen in this likable young star. Ten years later and that adoration and faith seems to have faded in the wash slightly. Prior to his impressive victory over his best opponent since his complete capitulation against Danny Garcia, Khan had been busy lobbying quite desperately for a bout with the undefeated phenomenon Floyd ‘Money’ Mayweather, only for his pleas to fall on deaf ears. Opinion seemed to be split on the subject, however, as many pundits believe that he has the tools to truly give Floyd a test that he most definitely has not been given in a while. The fans, meanwhile, seemed to incessantly question what it is exactly Khan has done to deserve such a coveted opportunity. I wanted to examine why Khan’s credibility is so low right now, but also whether he genuinely has the weaponry to at least threaten Mayweather’s seemingly impregnable fortress.

British boxing great Ricky Hatton will make a special guest appearance this Saturday (10th May) at the ‘Face Off’ between heavyweight rivals Dereck Chisora and Tyson Fury at The Printworks in Manchester.

The Hitman will be on the stage at 1pm with BoxNation presenter Steve Bunce as he looks ahead to the big Chisora-Fury showdown that takes place on Saturday 26th July at the Phones 4 U Arena. 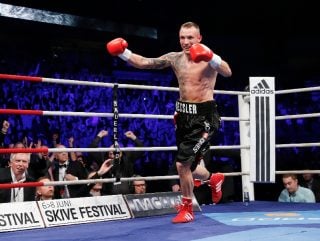 Mike Tyson & CEO Garry Jonas of “Iron Mike productions” has confirmed that they will appear and have a Booth Area at the inaugural Box Fan Expo this September at the Las Vegas Convention Center.

A monster May continues on BoxNation, hot on the heels of a jam-packed few weeks which has seen boxing’s leading channel air the year’s biggest bouts including star names such as Floyd Mayweather and Manny Pacquiao.

All the talk recently has been about the sold out Carl Froch and George Groves rematch, but there will be another equally exciting and intriguing rematch in London on the very same night, Saturday May 31st, at the York Hall in Bethnal Green, London, when George ‘Hit Hard’ Hillyard seeks redemption against Kirill Psonko.