(SPOKANE, WASH.) – Boxing fans and tournament participants have all been looking forward to Friday’s semifinal bouts throughout the week of competition and the day’s action did not disappoint. The semifinal round marked the tournament debut for all three 2012 Olympians as well as multiple reigning champions, and both the veterans and previously unheralded competitors put on a show.

2012 Olympic bronze medalist Marlen Esparza (Houston, Texas) set the tone for her Olympic teammates with an impressive third round TKO victory in her bout with Katie Durgin (Boston, Mass.). Esparza gave Durgin two standing eight counts in the third round of their flyweight semifinal contest before the referee halted the bout at the 1:21 mark of the stanza. Esparza’s win sets up a rematch of the 2013 USA Boxing National Championships women’s flyweight final round bout with Virginia Fuchs (Kemah, Texas).

Thank you very much. Thanks, everyone, for joining us today on this call. We have an exciting card to discuss today, headlining with Victor Ortiz and Luis Collazo, who will both be on the line.

Before we get to that, I’d like to turn it over now to Richard Schaefer, CEO of Golden Boy Promotions. Richard?

LONDON (Jan. 24) – BoxNation kicks off its 2014 world title coverage this weekend with an intriguing clash for the IBF World Light-Welterweight title between champion Lamont Peterson and mandatory challenger Dierry Jean from the DC Armory in Washington, USA.

The 29 year old Peterson’s story will be familiar to British diehards due to the extensive coverage he received here for his hugely controversial victory over Amir Khan in December 2011.

As previously announced, the special-edition Friday Night Fights triple-header will be headlined by highly regarded light heavyweight contender Blake Caparello (18-0-1, 6KO’s) making his much anticipated U.S. debut when he takes on the always-exciting Elvir Muriqi (40-5, 21KO’s) in a 10-round light heavyweight showdown. Junior featherweights Luis Rosa (15-0, 7KO’s) and Jorge Diaz (17-2, 10KO’s) meet in the eight-round co-feature, which is guaranteed to be a barnburner, and opening up the telecast will be 19-year-old sensation Dusty Hernandez-Harrison (19-0, 11KO’s) in his national T.V. debut when he squares off against Tim Witherspoon Jr. (10-3-1, 2KO’s) in an eight-round welterweight contest.

This Saturday rising Puerto Rican-American prospect Miguel ‘No Fear’ Cartagena ( 10-0, 3 KO’s ) from Philadelphia of Puerto Rican descendant, will face off against Mexican veteran, Felipe Rivas ( 15-15-2, 9 KO’s ) in a 8 round bout at super flyweight division at the Sands in Bethlehem, PA. 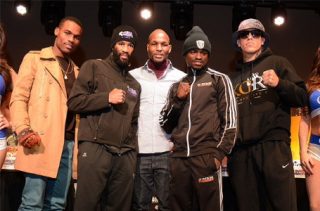 (Photo Credit: Delane Rouse – Hogan Photos/Golden Boy Promotions) WASHINGTON, D.C. (Jan. 23, 2014) — Just a couple of days away from the first night of the initial SHOWTIME CHAMPIONSHIP BOXING event in 2014, below please find what for Peterson vs. Jean trainers, fighters and promoters had to say at the final press conference at Hamilton Live in Washington, D.C. on Thursday:

“We’re going to give everyone a great show; make sure you come out and support. Once you’re inside you should be warm and kept plenty entertained by the fighters.

“It should be an entertaining fight, but at end of the day I’m going to come out victorious.

Undefeated heavyweight Deontay Wilder, most would agree, is a work in progress. He’s not your typical work in progress, however — unless you consider his record of 28-0 with 28 knockouts run of the mill.

Still, the question on most everyone’s mind: Does the former amateur standout and the last male American to medal in the Olympic Games possess the skills and talent to one day became a world champion?… read full article “Deontay Wilder Faces Liakhovich In Headliner Of Friday’s Great ShoBox Card”