Bury champion vows to dazzle in WBA defence against Munyai

Scott Quigg defends his WBA World Super Bantamweight title against Tshifhiwa Munyai on Saturday at the Phones 4 u Arena in Manchester live on Sky Sports – and has promised fans they will see him at his very best.

Quigg makes the second defence of his title against the South African and is looking to extend his unbeaten record to 30 fights in style. Last time out the Bury talent saw off Diego Silva in two rounds in the same Arena as the chief-support to Carl Froch’s Brit blockbuster with George Groves in November, and Quigg is excited to be back as the main attraction and ready to show his true class.

Two undefeated fighters remain in the Boxcino 2014 Middleweight tournament. Brandon Adams of Los Angeles raised a lot of eyebrows with his 4th round stoppage over Daniel Edouard in the quarterfinals that took place on February 28 in Hammond, Indiana.

Super-heavyweight Frazer Clarke is hoping to write his name in the history books as he prepares for next weekend’s England Boxing National Finals at the Echo Arena Liverpool, 25-27 April 2014.

Jamie faces Na Rachawat for WBA title on May 31

Jamie McDonnell will face Tabtimdaeng Na Rachawat for the vacant WBA Bantamweight title at Wembley Stadium connected by EE on May 31 live on Sky Sports Box Office in association with Betway. 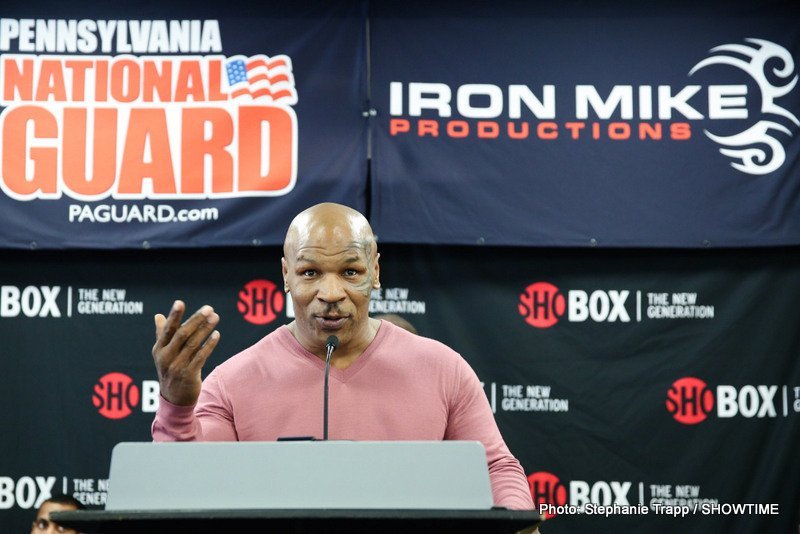 MONROEVILLE, Pa. (April 17, 2014) – It turns out promoter Mike Tyson can stir the pot almost as much as heavyweight champ Mike Tyson. Almost.

Tyson seemed right at home in his new role as promoter Thursday as he guided his Iron Mike Productions fighters through the final press conference and weigh-in for tomorrow’s ShoBox: The New Generation event.

Friday’s tripleheader airs live on SHOWTIME®, home of 16 of Tyson’s last 18 fights, at 10:45 p.m. ET/PT (delayed on the West Coast) from the Monroeville Convention Center in Monroeville, Pa., located outside of the Pittsburgh. 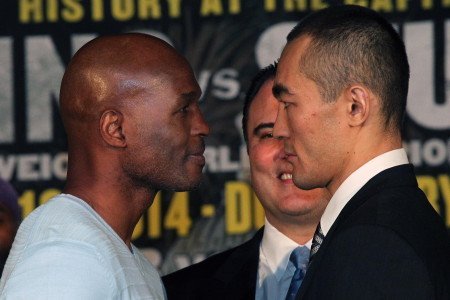 (Photo credit: Tom Casino/Showtime) WASHINGTON D.C. (April 17, 2014) – The fighters, including legendary future Hall of Famer Bernard “The Alien” Hopkins and Beibut Shumenov, who will compete on Saturday’s eagerly awaited “History at the Capitol” world championship tripleheader on SHOWTIME®, participated in the final press conference Thursday at The Hamilton Live in Washington, D.C.

In the history-making main event on SHOWTIME CHAMPIONSHIP BOXING® (9 p.m. ET/PT following the premiere of Episode 1 of ALL ACCESS: Mayweather vs. Maidana) the 49-year-old Hopkins (54-6-2, 32 KOs), of Philadelphia, will be seeking to become the oldest fighter in boxing history to unify world titles when he puts his IBF Light Heavyweight title on the line against his WBA counterpart, Shumenov (14-1, 9 KOs), of Shymkent, Kazakhstan, who is aiming to become the fastest fighter to unify the light heavyweight division with only 15 professional fights.

ORANGE, Calif. (April 17, 2014) – Thompson Boxing Promotions presents one of its finest shows of the year when it features top super bantamweight contender Efrain Esquivias (17-2-1, 10 KOs) of Carson, Calif. and undefeated junior welterweight prospect Giovani Santillan (11-0, 7 KOs) of San Diego in separate 8-round bouts on Friday, April 25, from the Doubletree Hotel in Ontario, Calif.

Lausanne, Switzerland, April 17th 2014 – The winners of the fourth competition day at the AIBA Youth World Championships advanced to the last 16 in Sofia, moving one step closer to a medal position.

Although many great performances were to be found on the day, it was the home favourite Daniel Asenov who impressed the most, while Ireland were perhaps the strongest overall nation, with four winning contests at the Armeec Arena on Day 4.

Read moreDaniel Asenov is the hero of the day