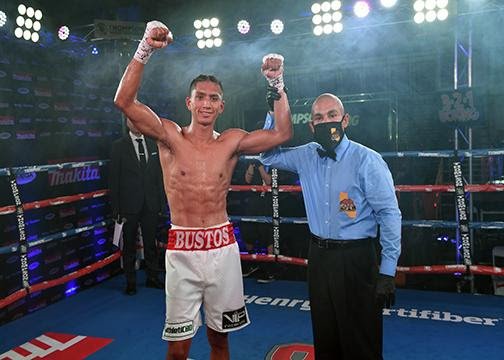 Tonight at the Omega Products International Event Center in Corona, CA, Thompson Boxing Promotions hosted the second edition of its 3.2.1. Boxing series. In the 8-round main event, welterweights Saul “El Chicano” Bustos and Luis Lopez went to war, in a battle of undefeated prospects.

From the opening bell, both fighters were letting their hands go, but it was Bustos who was getting the better of the exchanges. Lopez was landing a nice stiff jab, while Bustos was attacking the body. All throughout the fight, explosive power shots were being fired. Bustos took the first three rounds by landing the more precise punches. Lopez came on in the fourth, but Bustos was still landing powerful hooks to the body. In the final four rounds, Bustos kept coming with explosive combinations, but Lopez was standing his ground, retaliating with power shots of his own. Bustos would close out the final round with more pounding body shots. Bustos won by unanimous decision with the scorecards reading 80-72 and 79-73 twice. Bustos improves to (13-0-1, 7 KOs) as Lopez (8-1-1, 4 KOs) suffers his first defeat.

“I came into this fight in tremendous shape knowing I was fighting in my first eight-round bout,” Bustos stated. “The fight was explosive from the very begging, and I knew I had to go to the body early to slow him down. That strategy worked perfectly as he was starting to slow down in the later rounds. I give Lopez a lot of credit for making me work in every round. I ready to fight the next level of opposition, and hopefully, I can fight for a regional title in my next few fights.”

In the 6-round co-feature, super lightweight prospect, George “El Yuyu” Acosta (10-1, 1 KO) defeated Esteban “Stone Hands” Munoz (2-1, 2 KOs) by unanimous decision. Acosta used his superior boxing skills, along with his height, and reached to outwork Munoz, who wasn’t letting his hands go. Scorecards read 59-55, 60-54 twice, all in favor of Acosta.

“I thought I boxed beautifully tonight,” said Acosta. “I knew if I stuck to the game plan, which was to box from the outside, I would come out on top. I landed a few overhand rights, but Munoz kept coming. I’m hoping I can get right back the ring against another worthy opponent.”

The opening 4-round super featherweight bout showcased Katsuma “El Cuate Japonecito” Akitsugi vs. David Angeles. Akitsugi dominated the fight form the opening bell as he was landing clean shots throughout the fight. At the end of the round, two Akitsugi dropped Angeles with a straight left to the body. In the final rounds, Akitsugi continued to batter Angeles as he cruised to a unanimous decision. Scorecards read 40-35 in favor of Katsuma Akitsugi as he improves to (4-0, 1 KO) while David Angeles drops to (1-3).

“Once I got him hurt in the second round, I think I was trying to hard to knock him out,” said Akitsugi. “I stayed aggressive throughout the entire fight and won every round. I still have a lot to learn, and I’m going to keep working hard. I dominated this bout, and now it’s on to the next one.”