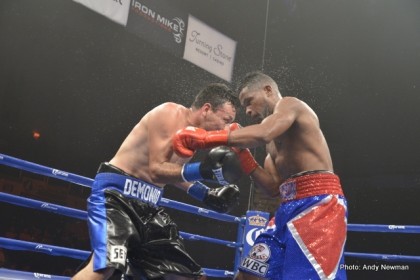 “It was a great night, I’m very proud,” Tyson remarked. “This was better than our first show here and the next time will be even better. It’s all about consistency. We saw some great fighters tonight and the fans were great, too. These guys make me look good, I’m honored.

“Oscar and Andre saw some good fights. There’s nothing better than hearing that from my peers. I’m really proud of Sammy. He’s an entertainer. I’d like to bring him back to Pittsburgh to fight Paul Spadafora, who is a great fighter. That will be a big fight.”

Jhonson, a stylist Cuban southpaw living in Miami, boxed his way to victory, decking Gonzalez with a short left in the fifth, buckling him in the sixth, and dropping him with a left in the ninth round.

“At the moment with my team, my managers and promoters,” Jhonson said after the fight, “I’m here to fight the top junior middleweights in the world and I proved that tonight. I’m looking for my world title shot. I’d like a rematch with Willie Nelson, to fight Ishe Smith, or any of the world champions. I’m open to fighting quality fighters to get my world title.”

READ:
Lennox Lewis On Wilder/Fury II: Both Of These Guys Are Number One And Number Two

Red-hot welterweight Sammy “The Who Can Mexican” Vasquez, Jr. (15-0, 11 KOs) proved once again why he’s one of the most fan friendly fighters in boxing. In the ESPN co-feature, the aggressive southpaw from Monessen, PA attacked like the Iraq War veteran he is, dropping “Smokin'” Jay Krupp (17-7, 8 KOs) in each of the first three rounds, after which referee Benji Estevez halted the action at the 1:19 mark.

“For my fans out there, the soldiers and family, it was an honor fighting on ESPN,” Vasquez commented. “I want to thank IMP and my father for getting me here. I thought it was a B performance. I made a couple of errors but did what I needed to do.” A star was born in the ESPN FNF opener as heavy-handed middleweight sensation Ievgin “The Ukrainian Lion” Khytrov (5-0, 5 KOs) stepped up in class against dangerous Chris Chatman (12-4-1, 5 KOs) and passed the test with flying colors. After a “feeling out” opening round, the 2012 Ukraine Olympian went to work, battering a game Chatman until a powerful, short left hook ended the fight in the third round. (winners listed first for each fight)