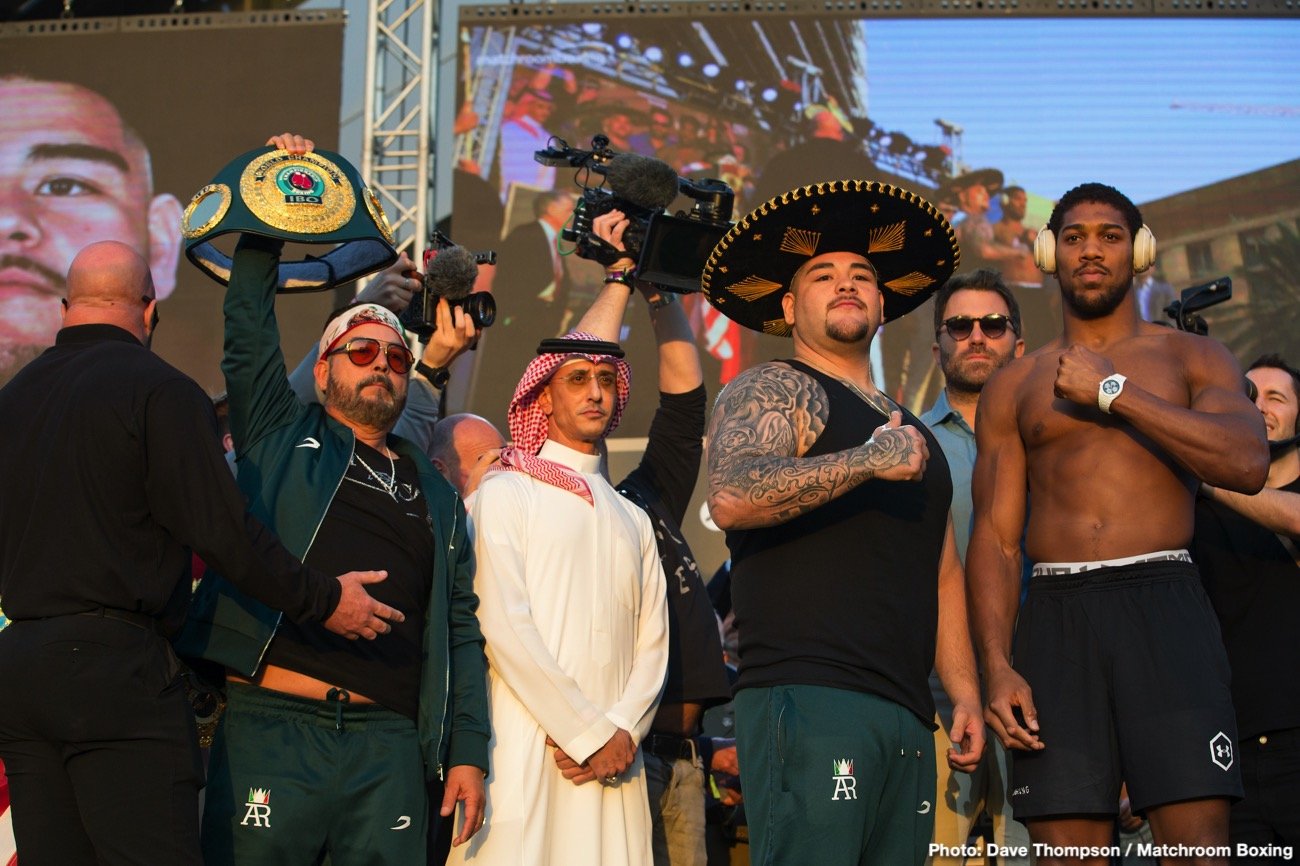 By Mauricio Sulaiman, Son of José Sulaimán: We are a few days away from the rematch between Andy Ruiz and Anthony Joshua, and it won`t be until the bell rings that the multiple doubts will be answered.

The scenario is absolutely different from when they faced each other the first time at Madison Square Garden in New York. Ruiz has risen to be world champion and Joshua is now the challenger. The absolute crowd support in favor of Joshua, which was mostly British in the first contest, will not be present, because the fight will be in Saudi Arabia. So, the arena will be filled with a local audience and the atmosphere will be different. In that country where there is no alcohol, there will not even be the traditional beer in the stands, the schedule will be adequate to achieve the best prime time television. But many other things will make the conditions completely different.

The maximum uncertainty occurs when trying to analyze what will happen in this fight. Let’s assess both fighters:

Anthony Joshua lost his undefeated record, was knocked out, embarrassed, and his championships were taken away. There are those who say that he underestimated Ruiz, as he had prepared for his debut in the United States, expecting a big and strong boxer in Jarrell Miller, who tested positive for banned substances.

After considering many names, Andy Ruiz was announced as the opponent. His physical characteristics were very different than Miller: Ruiz is short, chubby, and was totally unknown to the general public. It is said that Joshua did not train much in the last weeks, with ample confidence to easily defeat Ruiz.

After the defeat comes the great unknown: Will he be able to mentally overcome what happened in New York? Will he have the maturity to design a different fight plan to use his multiple advantages over his rival? Will he have the heart to recover the championship? When someone is so brutally beaten by his opponent, it is very common that he does not recover and is always dominated by that opponent. Everything will depend on the emotional durability and greatness of Joshua.

Andy Ruiz achieved the unthinkable and defeated the giant super-favorite and became a hero overnight. His life changed dramatically, and he has not been able to rest for a second since he became a celebrity. Now he is a millionaire and enjoys luxuries of which he`s dreamed since childhood. He states that for the first fight he was not ready at 100 percent capacity, and that for the rematch he will win again. He rose from the canvas to KO Joshua, his speed and the accuracy of blows were evident.

After the victory comes the great unknown: Will he be able to concentrate on the fight? Has so much distraction affected him? Has he achieved adequate preparation? What effect will the difference in time zone, environment and customs have in him?

I had the opportunity to see Andy on some occasions since he was crowned. He has been approached by countless offers, many opportunists trying to hang on to his achievements, and have brought to him distractions. His popularity with the fans is incredible. It is a phenomenon and he has had to travel everywhere for presentations with sponsors, filming, press conferences, events, and the occasional parties that go with this new life.

On the other hand, Joshua has been left in total obscurity – training and preparing? Or is he depressed and alone?

Canelo Alvarez was happily surprised by Ruiz who visited him prior to his match against Sergey Kovalev. Carlos Bremer got the two champions together on November 2 at the MGM.

Will Andy Ruiz manage to confirm his superiority and start a legendary career as a champion, or will he be an ephemeral monarch?

History shows us both options with clear examples:

Joe Louis vs. Max Schmeling: It was 1936, Joe Louis was undefeated, the American dream, and a great prospect when he fought former champion Max Schmeling from Germany. The 70,000 fans at Yankee Stadium were totally shocked when Schmeling knocked out Louis in 12 blistering rounds.

Two years later the rematch occurred. The expectation was one of the greatest in boxing history. The Nazi regime was building and making an extremely complicated political issue. Joe Louis knocked out Schmeling in the first round and continued his career achieving the record, still in effect, of the greatest number of championship defenses.

Another example is that of James Buster Douglas vs. Mike Tyson. Tyson was the undisputed world champion, considered invincible. Don King announced a “preparation” fight for Tyson before facing Holyfield with a championship defense against the unknown Buster Douglas. That night was perhaps the biggest surprise ever in boxing history. Douglas knocked Tyson out in the tenth round.

Buster became famous and spent months living the life of heavyweight world champion. Later that year he entered the ring completely out of shape and lost against Evander Holyfield by being knocked out in three rounds. Douglas never managed to climb back to the top again; he never held any significant fights before retiring.

Lennox Lewis one of the greatest heavyweight champions of all time, a dominating force for more than a decade. He proved to have a very tough emotional character. Lennox Lewis was surprised not once, but twice as he was knocked out by Oliver McCall and Hasim Rahman. On both occasions, Lewis came back strong and avenged those defeats.

We will see what happens this upcoming Saturday, December 7, as Matchroom presents one of the most important boxing events in recent history in front of a new market in Saudi Arabia, one which could very well be remembered by future generations as we now remember the “Rumble in the Jungle” and the “Thrilla in Manila.” We wish the best of luck and success to both fighters .

Thank you and I appreciate any comments, ideas or recommendations at contact@wbcboxing.com.