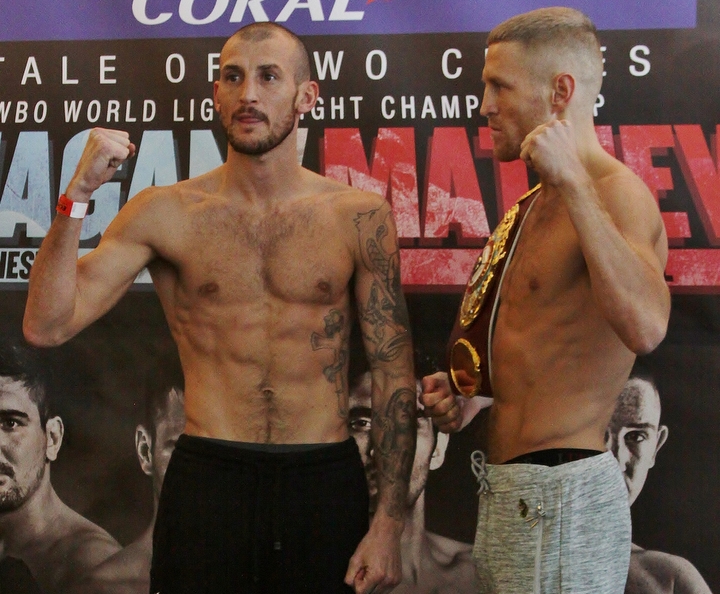 WBO World Lightweight champion Terry Flanagan and challenger Derry Mathews both hit the weight at today’s weigh-in for their eagerly-anticipated showdown tomorrow night at the Liverpool Echo Arena, live and exclusive on BoxNation.

Undefeated Flanagan, making the second defence of his title, looked in sensational shape weighing in spot on the 9st 9lbs limit. The Mancunian lightweight king will be looking to show the Echo Arena crowd why he is rated as one of the very best boxers in the world.

“All the talking is over and now it’s time to get in the ring and get it on. I’ve put everything into my training and I’m ready to show everyone that I’m the best lightweight in the world. I’m expecting a tough fight from Derry, we’re both in the best shape of our lives but I’ll have too much for him to handle,” said Flanagan.

Merseyside hero Mathews came in at 9st 8lbs and looked in tremendous condition ahead of the biggest night of his career. All-action ‘Dirty’ Derry is gearing up to make history in his 50th professional fight in front of his home crowd.

“I’m feeling great, everything has gone perfectly so far. I’m ready for everything that Terry is going to bring. I’m bringing my A game and I hope that he brings his. I hope that the crowd get their money’s worth in an exciting fight and fingers crossed it will be a great night for Liverpool,” said Mathews.

He added: “I’m excited and getting nervous which is only human but I’m loving every minute of it. I can’t wait to get in there now.”

WBO lightweight boss Terry Flanagan insists he’s suitably refreshed, relaxed and ready to rumble as the hours countdown to the second defence of his crown this weekend.

Having captured and retained the title in his home city of Manchester, the 26 year old takes his ‘Turbo’ engine across the M62 to Liverpool’s Echo Arena to dual home hero Derry Mathews in a showdown that has got the fight trade salivating. The reception is unlikely to be hospitable!

‘I’m not riled about going to Liverpool. I’ve savoured a top atmosphere at the MEN (Manchester Arena), now I get to enter the lion’s den; another experience,’ says the habitually laid-back and unruffled champ, who has triumphed in all 29 paid fights thus far.

‘Besides, I’ve travelled all over Britain and Europe with Man City and away days are always best. It’s a great trip for all the lads. I’ve personally sold nearly 500 tickets already. But home or away, you just blank the crowd out. Whenever I’m in the ring, I’m in the zone. Nothing fazes me.

‘Anyway, I can go back to Manchester for unification against (WBA boss Anthony) Crolla or (WBC king Jorge) Linares. They’re the fights I want. And I’d jump at a chance to defend abroad. There’s also (Puerto Rico’s touted WBO number three) Felix Verdejo, a top talent; perfect for my US debut!

Despite his habitually humble and introverted exterior, the former scaffolder will be bristling with inner belief after his sensational three knockdown, second round slaughter of feted Yank challenger Diego Magdaleno in his maiden defence at Manchester Arena last October.

‘The Magdaleno win brought me big props both in Britain and America but I refuse to get content,’ says Flanagan.

‘I have to keep on proving myself and Mathews is a huge domestic fight. A lot more Brits know Derry than knew Diego. It’s crucial that I shine on Saturday and keep the ball rolling.

Having nailed the vacant belt against feared and previously undefeated California bomber Jose Zepeda in July – albeit on an inconclusive injury retirement – and then rubbed out mandatory contender Magdaleno, the mighty Manc could have been excused if he’d opted to bolster his bank account against one of the tamer threats in the WBO’s listings.

However, his decision to twist against the concussive fists and notoriously wayward head of ‘Dirty Derry’ – and in the Scouser’s own yard – cements Flanagan as a worthy world champion.

He says: ‘I’ve never chosen an opponent or turned one down. I leave that all to the two Steves (trainer Maylett and manager Wood) plus Frank Warren. Because Derry’s with Frank, this makes sense. I need big names that interest the fans, to put myself out there. Though it’s a voluntary, it’s a high profile fight but we obviously fancied our chances.’

While challenger Mathews has the luxury of home court, the Liverpudlian is well into his 33rd year and has already been bettered nine times – seven before the judges were required – in a 13 year, 49 fight innings.

But while Flanagan has already mounted the Mersey man’s scalp after a three round Prizefighter tussle in 2012, and claims the upside of several spars that the pair shared during Flanagan’s apprenticeship, ‘Turbo Terry’ is aware that complacency could prove as big a problem as the Scouser’s feted scuds.

’Derry’s got a load of Twitter followers and he’s trying to sell the fight. I’ll stand my corner but there’s no hatred. I like him, find him funny.

‘Sometimes my fans get riled but I never get mad about opponents comments before a fight. They really mean nothing. Derry claims I pulled out in February because I had weight problems but I’ve never made lightweight more comfy. I’ve never struggled in the past, never spoken about moving up.

‘Size doesn’t mean owt. It’s about skill levels and mine are way above his. But lightweight is my division and I’m very fit and strong there. People say I’ve only stopped 12 but, since Prizefighter, nine of 11 have failed to last the distance, including the last six.

‘It’s not just about banging ‘em out – though I showed against Magdaleno I can turn a fight with one shot – it’s about physical maturity. Earlier in my career I relied on speed but now I’ve far more variety to my game. At 26, I’m a proper man. If Derry’s daft and charges on to me, he’ll get stopped.’

Despite venturing out of the away corner, the bookmakers have installed Flanagan as a 5-1 on fancy to retain his belt. Nevertheless, this consummate professional anticipates an almighty argument before his arm is lifted.

‘After the Frampton-Crolla let down, expect Fight of the Year. Everyone’s talking about the fantastic shape that Derry is in. I’m expecting a great fight and I’ve prepared for 12 very hard rounds,’ says the champ who is yet to venture beyond round ten.

‘I told Derry I’d stop him at the press conference but that was only to get him riled. We’re fully aware that he’s always dangerous – especially when his back’s against the wall – so you can never switch off.

‘He never hurt me once in sparring or Prizefighter and he’s no more dangerous than Jose Zepeda who’d stopped 20 of 23. But I know this is a different game with small gloves and no head guards. He’s definitely got a punchers chance. At this level, it’s definitely about not getting hit.

‘I just need to stay switched on. Ninety-nine times out of 100, the better boxer wins the fight and I’m a level above Derry in every department.’

Merseyside hero Mathews is looking to land a full world title in his 50th professional fight in front of his home crowd. All-action ‘Dirty’ Derry is one of the toughest fighters to come out of Liverpool and is planning on winning by any means necessary. Mathews, 38-9-2, 20 KOs, has previously won interim World, British and Commonwealth titles but now wants to be recognised as the best lightweight in the world.

He added: “I think mine and Terry’s styles gel well so it’s going to be an exciting fight. We’re both putting it all on the line and neither of us are going to run away from each other. We both like to have a bit of a fight,”

Flanagan holds a win over Mathews from when the North West rivals fought it out in a Prize Fighter contest back in 2013 but is expecting a tougher fight this time round. The Mancunian lightweight star is undefeated in all 29 of his professional fights and is planning on showing the Liverpool crowd why he’s rated as the world’s best.

“I think we’re both different fighters now. The Prize Fighter fight was a few years back now and we’ve both improved since then. Whatever is going to happen will happen on the night. We’ve both trained hard for this, we’re both in the best shape of our lives and the best man will win; I believe that’s me,” said Flanagan.

He said: “It’s going to be a good night in Liverpool. I think it’s going to be a bit hostile for me coming from Manchester so it should be a good atmosphere. The hostility doesn’t bother me; not where I’m from! The atmosphere isn’t going to bother me. I’m sure there’s plenty of Scousers out there who want Derry to get beat and loads of Mancs who want to see me lose,”

He added: “I think I’m the best lightweight in the world but it’s for you to judge. Obviously I can’t look past Derry but when I come through Saturday they’re the kind of fights I want to prove that I’m the best.”

Hall of Fame promoter Frank Warren expressed his excitement over the eagerly-anticipated all-British blockbuster and predicted a gripping contest between two determined men who will stop at nothing to get their win.

“The main event is a cracking fight. I think it has all the ingredients of being fight of the year. The build up to the Carl Frampton versus Scott Quigg fight was quite intense but the fight turned out to be a damp squib. They were arguing about dressing rooms but Terry and Derry would get changed in the car park for this fight. All they care about is getting the fight on and getting in the ring and one of them coming out with the prize,” said Warren.

He added: “Steve Maylett and Danny Vaughan have got their guys in fantastic condition. There’s going to be no excuses after; they’re 100% ready. The winner will win on merit and that’s how it’s going to be.”

Manchester’s WBA lightweight champion Anthony Crolla has been earmarked as a potential opponent for the winner of Saturday’s showdown. Crolla lost to Liverpool’s Mathews earlier in his career by a sixth round stoppage and would be keen for revenge. The old foes fought out an absorbing draw when they met in a rematch back in 2013, with many describing it as the fight of the year. ‘Turbo’ would be keen to take on his schoolmate to find out who the real Macunian lightweight king is. Warren believes it is a contest that would make sense for all parties.

He said: “We’ve offered Anthony £500,000 to fight the winner and that offer still stands. It’s a real hotbed up here at the moment in this division so let’s find out who the best fighter is in the North West is. That fight makes a lot of sense, I know he’s not making that kind of money to fight Barroso so there it’s a no brainer. It’s a big pay day for the Anthony and the winner of this fight so let’s get it on.”

Doors will open at 5pm with the first fight starting at 5.30pm.