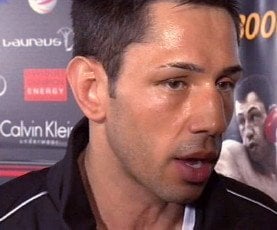 Fighting Golovkin would likely be a lot tougher for Sturm than facing someone like Abraham, who doesn’t punch with as much speed or concussive power as Golovkin does. And Stieglitz isn’t really a big puncher. He’s more a boxer and it’s someone that Sturm could manage a lot easier than facing a crushing puncher like Golovkin.

Sturm should be able to get past Geale next month. He’s got the better jab, the better power and he’s fighting at home in Germany. Geale is a pure boxer and he’s going to be facing someone with better skills than him in Sturm. The kinds of fighters that Sturm has problems with are fighters that can hit hard and who throw a lot of punches. Geale is neither a puncher or a fighter that throws a lot of shots. Sturm should win this fight.