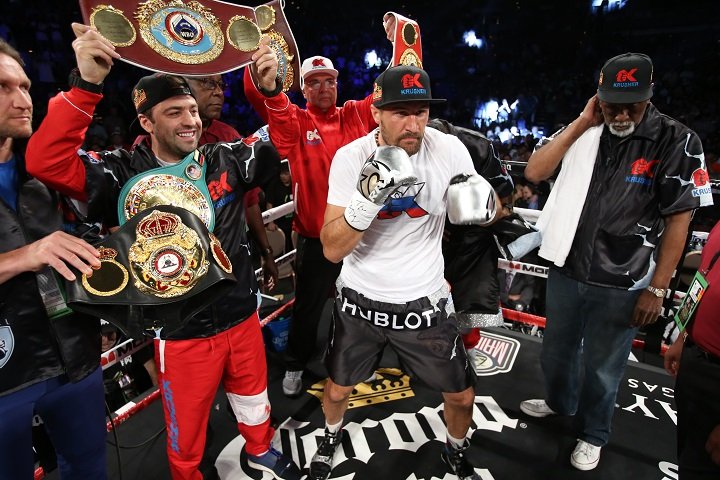 Former light-heavyweight champion Sergey Kovalev is still unhappy over the way Andre Ward defeated him via stoppage in their June 17 rematch; itself a return meeting of a controversial decision victory picked up by Ward.

As fans know, the unbeaten Ward stopped Kovalev in the eighth round in the rematch, his body shots accounting for most of the damage. Kovalev and his team argued instantly, as they continue to argue today, that Ward’s body shots were in fact low. Referee Tony Weeks did not act accordingly, argue Team-Kovalev, who say the low blows were intentional.

Now, this week, some five weeks or so after the fight, Kovalev has filed an official protest asking for the bout’s result to be changed to a no contest.

According to a news story via The Las Vegas Review-Journal, who broke the story, Kovalev’s lawyers wrote to the Nevada Athletic Commission on Monday (July 24) requesting that the TKO defeat be reversed to a no contest. Kovalev’s lawyers also requested how the 8th round be reviewed on video so that the low blows can be looked at again.

The letter goes on to argue how Weeks – a referee the lawyers agree is a most competent official – simply got it wrong, and did not see many of the low blows due to a poor view of the action at that time.

So what do the fans think? Has Kovalev got a case or is he simply a poor loser? There was nothing at all wrong with the cracking right hand Ward nailed Kovalev with in the 8th round; this terrific punch really hurting the former champ. The subsequent body shots were definitely low, some of them anyway, but it seems unlikely the TKO scored by Ward will be changed.

In the final analysis, Ward proved to be the better fighter. Kovalev should take the defeat and move on with his career.