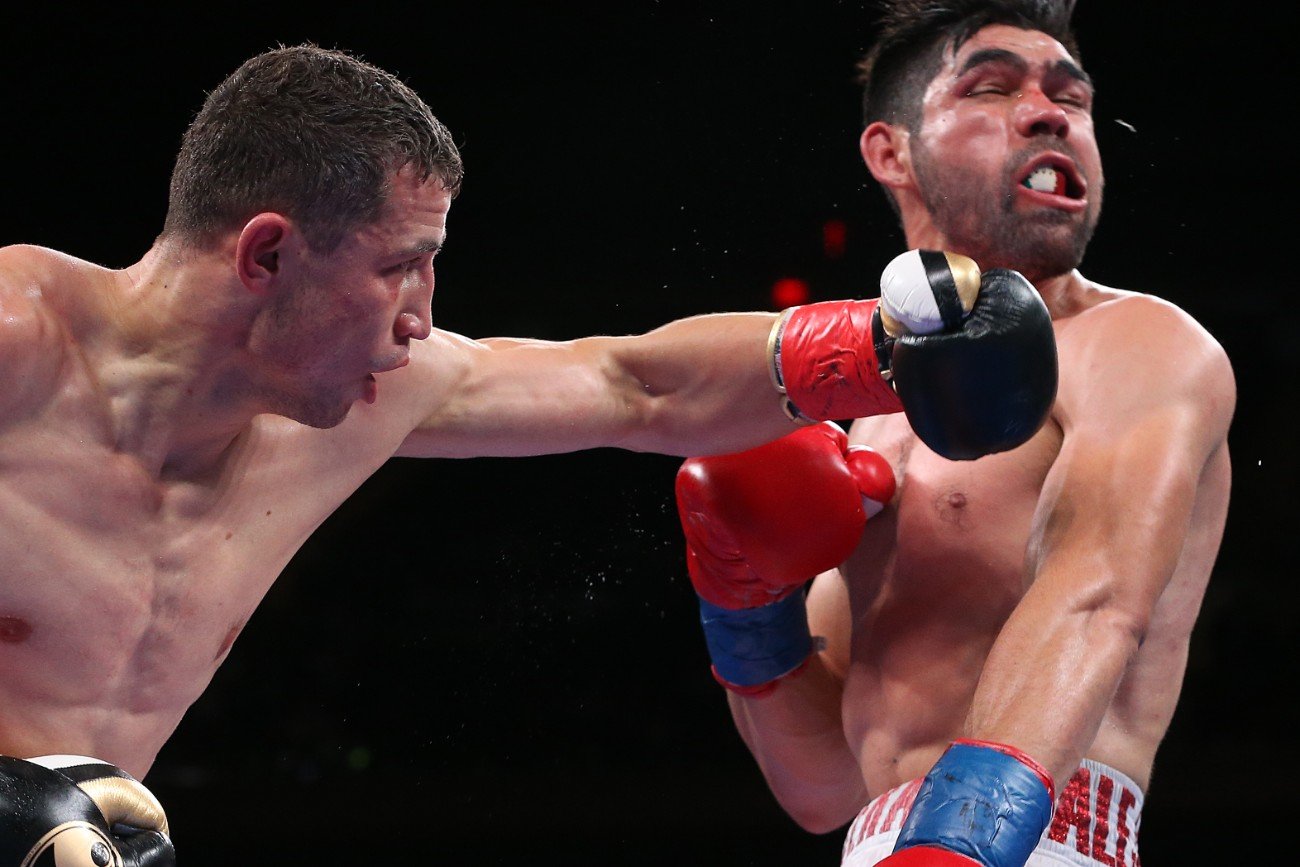 Boxing’s Top International Prospect, Israil Madrimov improved to 4-0 with four knockouts on Saturday night with a fifth-round stoppage of Alejandro Barrera, (29-6, 18 KOs) of Monterrey, Mexico, at the Mecca of Boxing, Madison Square Garden. The scheduled ten-round bout was the co-feature to the World Middleweight Championship between Gennadiy ‘GGG’ Golovkin and Sergiy ‘The Technician’ Derevyanchencko and was telecast live on DAZN in the United States.

Dominating the action from the opening bell, Madrimov, trained by Joel Diaz in Indio, CA, switched at will from orthodox to southpaw impressing the huge crowd and network commentators with his array of punches; landing left hooks and body shots at will.

Barrera dropped by Madrimov in round one

The 24-year-old former amateur standout from Uzbekistan scored a knockdown in the first round with a left hook and was unrelenting with body shots after Barrera rose from the canvas.

With Madrimov landing multiple body heads shots in the fifth round, referee Benjy Estevez rescued the valiant Barerra from any further damage at the 2:36 mark of the stanza.

Said Madrimov about the victory, “First of all, I want to thank Gennadiy Golovkin, the Big Drama Show, I’m super excited to be a part of it.”

Madrimov knew he had tough opponent

“I knew exactly who I’m fighting, I knew the guy was very tough, and I expected to stop him in the fifth or sixth rounds. I knew I was going to take some punches to get him tired, and that’s exactly what happened, when I felt there was no power, I knew I could take him out.”

“First two rounds, the guy was really reckless, really awkward, so it took a couple rounds to find the rhythm because usually I’m the awkward guy, but this time, the guy created a little trouble with the way he punches. But after two rounds, we were good.”

“I came to the sport to be a sensation in this sport, so let’s make a sensation with promoters. Whoever takes the fight, I’m ready to fight any champions at 154 in my next fight.”

“This win is for all for you guys who support me, please give me your attention – I won’t disappoint you, every fight will be exciting, I promise you.”

Madrimov poised to fight for world title in 2020

Said Vadim Kornilov, “Israil continues to show that he has all the skills to become a world champion soon. He continues to train as a champion and on fight night he’s putting on the type of performances that exhilarate the fans.”

“We have been discussing with the promotional team, Eddie Hearn and Andrei Ryabinskiy, the possibility of Israil fighting for a world title next year! We look forward to even tougher challenges and for Israil to continue to prove that he’s a future superstar in boxing.”