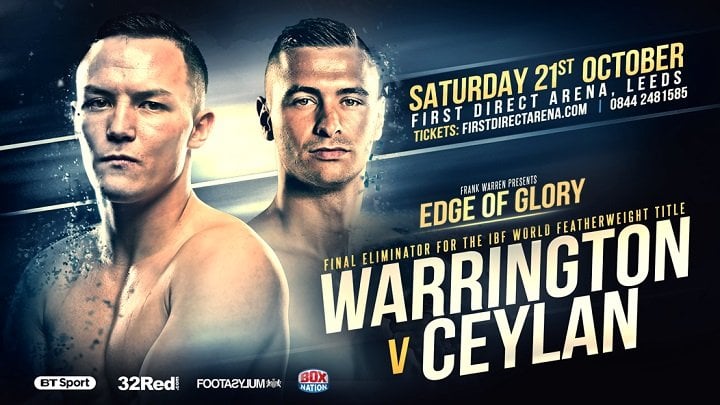 Glynn Evans had a fascinating chat with Dennis Ceylan who meets Leeds hero Josh Warrington in a IBF featherweight title final eliminator at the First Direct Arena on October 21, where the winner is assured of a world title fight.

You endured a traumatic childhood and were raised in state institutions. To what extent did that fashion your thirst to fight?

Not much, if I’m honest. My mother was a drug addict and, at the age of eight, I was taken into custody, until I was 16 when I left to live with friends. Shortly after, I met my girlfriend and we had our children.

I grew up in an environment surrounded by drugs and crime but it wasn’t my fault and during my childhood, I was always happy, still am.

How did you become involved in boxing?

Shortly after entering custody, I started to train as a boxer after seeing the Rocky movies. I was so inspired by how he tried to avenge his friend who had been killed by (Ivan) Drago. I don’t watch boxing much on TV so I have to say that Rocky is my boxing hero.

A multiple national amateur champion, you represented the Leipzig Leopards in the World Series of Boxing (2011-12) then Denmark at the 2012 London Olympics. How do you reflect on your amateur career?

It was my coach’s dream for me to represent Denmark at the Olympics. I really wasn’t that bothered. My heart wasn’t there. My goal was always just to be a prizefighter, a professional. (Dennis was eliminated by Ireland’s John Joe Nevin in his opening bout).

My favourite memory was the food at the Olympic village. I was queuing, apprehensive about how much the cookie might cost. When I discovered everything was free, I was away!

For those who are yet to witness you perform, what would you say are your best attributes as a boxer?

I like to think I’m okay all round. I’m not the greatest at any one special thing but I don’t have any glaring weaknesses either. I’d say my biggest asset is my coach Frank (Holm). He assumed the role of my father and he’s been the key behind all of my victories. He keeps me on a lead like a dog, makes me stick to my boxing.

In the first round of your first title fight, you were dumped heavily by British champion Ryan Walsh. How did you manage to turn matters in your favour?

It was a tough start, for sure. That was the first time I’d landed on my ass as a pro. It was such a hard punch, really hit the spot and, back then, my neck wasn’t so strong. But the experience of being knocked over just woke me up and made me more intense. Sometimes, I can get lazy in a fight but, after that, I was more focussed than I’ve ever been. I started to use my boxing, think more.

Your maiden title defence against Morecombe’s Commonwealth king Isaac Lowe featured almost as much scuffling at the press conference and weigh-in as it did between the ropes!

Lowe is the only opponent that I’ve hated, because he acted like he did. Why do you have to be like that? There’s no need but I have to say he was very good at it!

I started the fight well, watching and waiting to see what he could do. Suddenly, I got the head butt and the fight was brought to an early end. Shit happens. (The Dane retained on a four round technical draw, unable to continue after suffering a split eye lid).

You’ve won previously in Iceland and Germany as a pro. Are you apprehensive about confronting Warrington’s riotous Leeds crowd later this month?

I just hope that the judges will be fair. It’s not right that I have to knock him out to win, just because our fight takes place in the UK.

I see that he brings a big crowd and they can be very noisy but that certainly doesn’t frighten me. It’ll just light a fire inside my belly and make me fight harder.

Josh Warrington takes on undefeated Dane Dennis Ceylan in a Final Eliminator for the IBF Featherweight World title at the First Direct Arena on Saturday 21st October, live on BT Sport and BoxNation.

The Leeds hero (25-0, 5 KOs) is within touching distance of forcing a dream World title showdown with bitter rival Lee Selby.

Former European Champion Ceylan (18-0-2, 8 KOs) has his sights firmly set on World title honours but must overcome his toughest career challenge to date in the undefeated Warrington if he is to set-up a clash with Selby.

Rising Manchester Super-Featherweight star Zelfa Barrett (18-0, 11 KOs) has a chance to win his first professional title when he takes on Chris Conwell (9-2, 2 KOs) for the Vacant English strap.