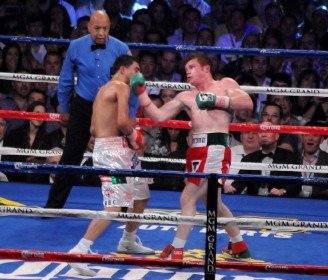 It’s a well known fact that both of these main event fighters have Floyd ‘Money’ Mayweather on their respective RADAR, either man would welcome a BIG MONEY fight with the P4P king. But who will Mayweather chose? I’m almost positive had Lopez pulled off the upset Mayweather would’ve faced him…only BECAUSE the drama of it all would’ve have made it compelling while also raising its value to a MONETARY level satisfactory to Mayweather’s requirements! Facing Canelo has more risk than reward at this point for Mayweather, he’d be expected to BEAT Canelo, but losing to him would throw Mayweather’s whole career into question by his naysayers; and Mayweather’s not ready to pass the torch anytime soon.

Facing Maravilla for the 160lb CROWN would be a high risk/HIGHER reward fight for the ‘Money’ Mayweather. Having Maravilla’s name on his resume plus the middleweight titles would be great for Mayweather’s LEGACY and also his pocketbook. Having to move up in weight Mayweather would be EXPECTED to LOSE! Fighting and BEATING the other preeminent southpaw fighting today would enhance Mayweather’s ring exploits to LEGENDARY status. And afterwards Mayweather could always end his career with BIG MONEY fights against Canelo and/or Manny Pacquiao, which is how things will probably play out.

Here’s to hoping that Mayweather’s next fight will be against Maravilla for the middleweight crown.