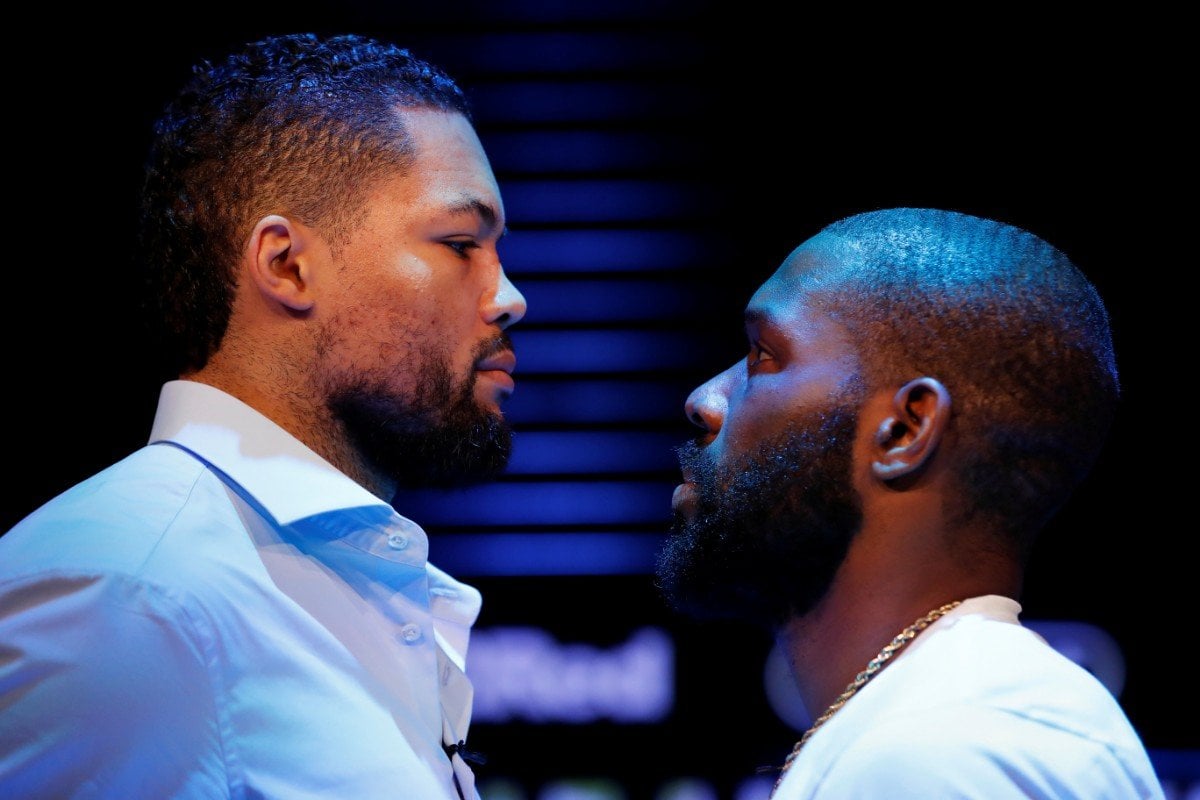 A press conference was held at the BT Studios this afternoon for the star-studded undercard that backs up the top of the bill fight.

Here are a selection of quotes from today’s press conference.

“The card is fantastic from top to bottom. These guys are stellar fighters and will win world titles.

Joe against Bryant is a genuine 50-50 and with Bryant’s experience at world level he knows what it’s all about. Joe is the Juggernaut though. He has made exceptional progress and is even better now with Adam Booth training him.

“Sunny is super talented and when I spoke to Tommy Frank’s promoter about a British title fight he said; ’No’.

When Liam wins, we will request he is rated in the top five by the WBC. He is really enjoying his boxing and motivated to get in the world title mix. He has bigger ambitions than he has ever had before.”

“I’m good, ready, had a good camp and incorporated what Adam Booth has taught me and I’m really excited because this is a big fight against a credible opponent.

“This is the biggest fight of my professional career so far. Let’s see if he runs or goes toe-to-toe.

“It might be 1-0 to him with Adam, but now is redemption. Adam has taught me not to be a sitting target and get my head off line.

“I want to continue my 100 per-cent KO ratio and go 10-0 all by knockouts. I will be happy for it not to go the distance, but I am happy going 12 rounds. I just want to line them up and knock them over.

“The winner of Dubois v Gorman is an option and hopefully I will have time to get changed and come out to watch it after my fight. It is a 50-50 fight. Dubois is very strong and if he lands you’re in trouble. Gorman is a lot slicker.”

“Joe pummels people but you could have pummel v pummel and if it’s gonna be rock ’n sock robot okay.

“It’s boxing and don’t ignore the possibility of anything happening. You can be almost chilling and suddenly over.

“It isn’t in my DNA to lay down. That is something I can’t comprehend. To calculate the fact I am here to lay down they have got it wrong.

“His trainer Adam Booth has a thing with me and tried with Mike Perez but couldn’t. I won that fight. Joe’s trainer Adam and myself have history from that. I expect us both to bring our best.

“I have sparred Gorman. He is a phenomenal kid and the only way is up, but I can’t rate off sparring but he has potential. I haven’t watched Dubois.”

“Everything is going perfect. The move to Sheffield to train was the best move of my career and came at the right time.

“I am performing, happy with performances but I need bigger name opponents. I am too good for these guys, but I have a hard fight on Saturday. Achour has never been stopped. He has great experience and knows his way around, but I am in good form, getting better, stronger.

“You are going to see a devastating performance and I will be the first man to stop him. All I’m doing in Sheffield is training and resting. I am living the perfect boxer life.

“I one-million percent believe I will win a world title in a year. I am a lot more confident in my ability. When you’re young and cut corners you question yourself. I am doing it right.

“People think I am stupid, but although Gennady Golovkin isn’t a world champion I would love to fight him. I fear no man.”

“It seems I’m an avoided man by British fighters. It is frustrating as I would like to build my career the traditional way and win the British title, but that is not happening because I’m too much of a risk. I am open to fighting any British super-flyweight if it’s right.

“I have done the hard work to get on these TV bills and I want to stay busy. I’m in a good position and the only thing that can take that away is me not performing.

“I don’t study too much of opponents, but I just watch a bit and leave it to my trainer. Gallardo has never been stopped and won against unbeaten fighters. He is no mug and coming to win.

“I have never sold myself as a big puncher, but I am elusive enough that I don’t get too much damage.

“My Mum has had health problems but she will be there and I will box well enough for her to be happy. Her problems came five years ago and she is the perfect Mum. Maybe we’re living on borrowed time with her, but every day we get to see her and there are people in worst situations.”

“It’s not about me doing a better job than Sam Bowen on McCorry. I have just got to win in style.

“He says he has the physical strength, but they all say that. He is going to be shocked because I have got stronger from when I beat Lyon Woodstock in my last fight.

“My footwork is phenomenal and always has been. On Saturday you will see that he will try and rough me up, but I should make easy work of it.

“Nobody is coming to my hometown and taking my belt. I am also starting to show I can put people away.

“The super-featherweight division is on fire. Jamel Herring the WBO world champion has mentioned my name so let’s see where we are after Saturday.”