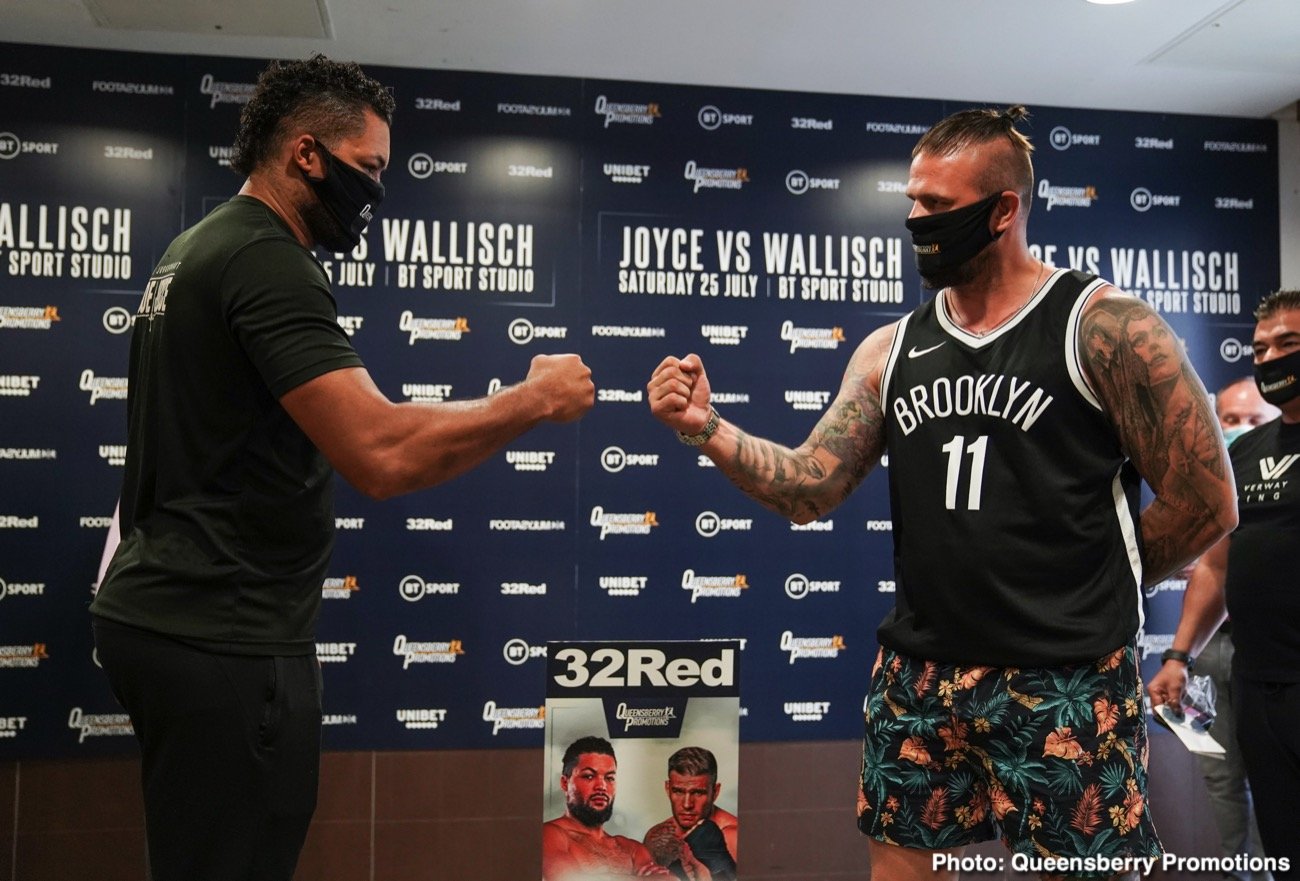 ALL CLEAR: JOYCE vs WALLISCH SET AS 80 COVID-19 TESTS, ALL NEGATIVE

Queensberry Promotions are delighted to confirm that the last of the covid-19 tests have now been returned and we are all set for Joyce vs Wallisch tonight on BT Sport 1 at 7.15pm.

In total, 80 tests were carried out this week on essential personnel and all were negative.

Now fans can look forward to seeing Joe Joyce make his Heavyweight return in the main event against German bruiser Michael Wallisch, who is hoping to derail The Juggernaut’s journey to a blockbuster bout with Daniel Dubois later in the year.

Joyce vs Wallisch is live on BT Sport 1 at 7.15 pm TONIGHT

Heavyweight contender Joe Joyce, who is on track for a super fight against fellow undefeated British heavyweight Daniel “Dynamite” Dubois, will take on the battle-hardened Michael Wallisch in the 10-round main event Saturday from BT Sport Studio in London.

This closed-door card, promoted by Queensberry Promotions, marks Joyce’s first ring appearance since last July’s unanimous decision over former world title challenger Bryant Jennings. This will be an interesting matchup to show whether Joyce has the talent to take the next step in his career against Dubois.

Joyce-Wallisch will headline an afternoon of boxing streaming on ESPN+ beginning at 2 p.m. ET/11 a.m. PT.

Joyce (10-0, 9 KOs) burst onto the pro boxing scene after capturing a super heavyweight silver medal for the United Kingdom at the 2016 Rio Olympics. In less than three years as a professional, he has knockout victories over former world champion Bermane Stiverne and former world title challenger Alexander Ustinov. He won the Commonwealth title in his fourth pro fight with a second-round stoppage over Lenroy Thomas.

Although the Dubois fight is in the cards, he must defeat Wallisch (20-3, 13 KOs), a German veteran who once held the WBO European heavyweight belt. He last fought in September 2019 and was knocked out in three rounds by Tony Yoka, the man who edged Joyce in the 2016 Olympic gold medal match.

Welterweight prospect Ekow “The Engine” Essuman (13-0, 5 KOs), who knocked out the previously undefeated Curtis Felix Jr. in his last fight, will take on an opponent to be named in a 10-rounder.

Middleweight knockout artist Denzel Bentley (12-0, 10 KOs) will look to extend his knockout streak to three against Mick “The Hammer” Hall (15-2, 2 KOs) in a 10-rounder.

Boxing is returning exclusively to the talkSPORT network, starting this Saturday night with the first bout since lockdown – Joe Joyce v Michael Wallisch.

The evening’s heavyweight contest is in preparation for British boxing’s Heavyweight super-fight between Daniel Dubois v Joe Joyce rescheduled at the O2 on October 24, which will also be covered live and exclusively on the talkSPORT network and Dubois’ warm-up fight in August, as the boxing world looks towards the massive showdown and two potential World heavyweight champions.

talkSPORT’s live commentary team for the fights includes talkSPORT boxing experts Andy Clarke, Gareth A Davies and Spencer Oliver who will cover all the action and the build up of the event in a Fight Night special from 9pm-1am on talkSPORT.

Frank Warren said: “I’m delighted to be able to bring live boxing to talkSPORT and have talkSPORT partner with us as we make our way towards one of the biggest Heavyweight fights in recent memory: Daniel Dubois vs Joe Joyce.

“Both Daniel and Joe have really tough tune-up fights to get through before that’s a done deal though, and talkSPORT listeners will have the chance to follow every moment from those fights too.

“Joe faces experienced German veteran Michael Wallisch this Saturday, then Daniel will face amateur standout Erik Pfeifer on August 29th. Should everything go to plan, fans will then get the big one – Dubois vs Joyce – on October 24th, live from the O2 Arena.

“This is an exciting time for Heavyweight boxing in this country and I’m happy talkSPORT will be telling that story.”

Head of talkSPORT Lee Clayton said: “talkSPORT has form in delivering the biggest boxing bouts – these rights follow our exclusive coverage of the box office Fury v Wilder rematch in February and our fantastic Fight Night show which comes to life around these major events.

“Watch out for our Fight of My Life series too, including legends such as Barry McGuigan, Johnny Nelson and Nigel Benn selecting and talking through the greatest fight of their careers.

“Our team of boxing experts will engage our legion of fight fans and bring them all the insight, analysis and unmissable action throughout the contests.”

Listeners can tune in to talkSPORT via the app, online, on DAB digital radio and on 1089 or 1053 AM.