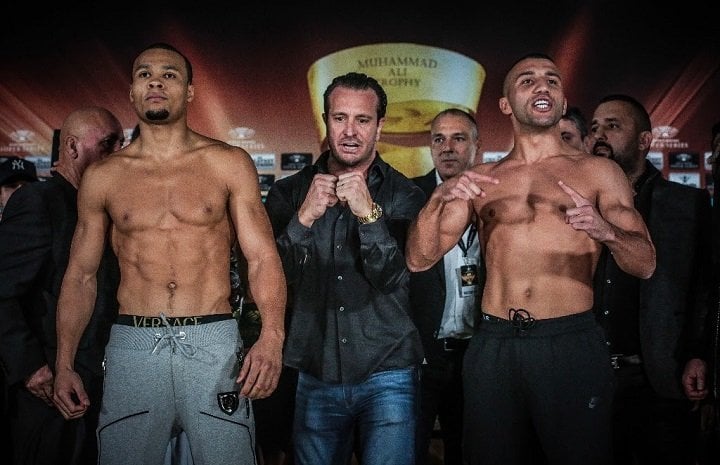 “I am looking forward to the fight, and I believe I will stop my opponent,” said Chris Eubank Jr.

“The Ali Trophy is the stage for me to show what Chris Eubank Jr. is about, and I will show that I am the best super-middleweight in the world. I can’t wait to get started in this amazing tournament.”

His Turkish opponent is, however, ready to show he has the ability to enter the world stage.

“I am going to make the Turkish people proud,” said Yildirim.

“I am proud to represent my country and the Turkish flag, and I know I have what it takes to win the Muhammad Ali Trophy starting with beating Eubank. He should prepare for war!”

Chris Eubank Jr. honored his father at a photo shoot before Saturday’s Ali Trophy quarter-final clash with Avni Yildirim at the Hanns-Martin-Schleyer-Halle in Stuttgart, Germany.

“My father was one of the most dazzling figures in boxing in his era and one of the most successful,” said Eubank Jr. about his legendary father, two-weight champion Chris Eubank Sr.

“He electrified the audience and made his opponents feel insecure,” Jr. recalled.

One of the most electrifying moments came in May 1995, when Chris Eubank Sr. entered the arena on a Harley-Davidson before fighting Steve Collins.

“Boxing is not only a sport, but also a show, and I will try to be as good as my father in both matters.”

However, Junior also remembered the outcome of the fight in 1995:

“It was the first defeat of my father. That’s why I chose another Harley-Davidson for the photo shoot.”

Instead of a ‘1975 Shovelhead’, Junior chose a ‘2018 Fat Boy’ – the successor model of the famous motorcycle from the Terminator-movies.

“I am the next generation, the future of boxing. On Saturday I will terminate Yildirim, the so-called Turkish Rambo,” said Eubank Jr. and promised:

“Before I win the ‘Ali Trophy’ in May next year, I’ll enter an arena on a Harley just like my father!”