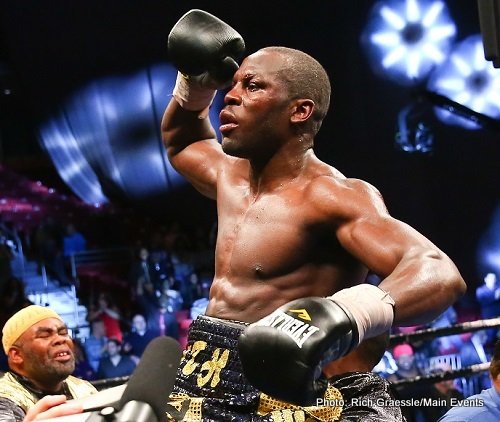 Cunningham’s brutal battle with then-undefeated Amir “Hardcore” Mansour on April 4 in front of an electrified hometown crowd earned him the USBA Heavyweight Title and was an instant classic.

The Oct. 18 show also features a solid 10-round junior lightweight contest between Edner Cherry, of Wauchula, FL, and Jerry Belmontes, of Corpus Christi, TX. The Fight Night telecast will begin at 9 PM ET. The doors will open at 6.

Cunningham, 38, spent the majority of his career at cruiserweight before moving up to heavyweight two years ago.

Visinia, 28, of Lakewood, CA, is a former stand-out high school and college football player. He was all-state in Missouri for William Chrisman High School then went on to start at left guard for Southern Illinois University. He took up boxing in 2006 to stay in shape for football, but fell in love with the sport. He began his fighting career in MMA, where he became the #2 ranked amateur heavyweight in the US before making his pro debut on King of the Cage. He then switched to boxing and joined the All American Heavyweight camp. More recently, he signed with Final Forum Promotions, who delivered a reinvigorated Derric Rossy for the August 9, 2014 Fight Night main event against Czar Glazkov. Visinia has knocked out eight of his ten pro boxing opponents-seven of them in the first round. This will be the first 10-round fight of his career.

“Steve Cunningham is a long-time respected world champion and Natu is a young-rising heavyweight contender,” said Visinia’s promoter, Sal Musumeci, of Final Forum Promotions. “And on October 18 it will be out with the old and in with the new.”

Visinia: “I am extremely excited for the opportunity to fight former cruiserweight champ, Steve Cunningham. As much as I admire his experience and accomplishments in the sport, I do not intend on leaving Philly without the win.”

There also should be fireworks in the co-feature.

Cherry, 32, has not lost in more than six years and is ranked No. 11 in the world by the IBF and No. 17 by the WBC. His 32-6-2 record includes 17 knockouts and he has beaten Vicente Escobido, of Woodland, CA; Stevie Johnston, of Denver, CO; Daniel Alicea, of Santurce, Puerto Rico, and Monte Meza-Clay, of Rankin, PA.

The last man to beat Cherry was Timothy Bradley for the WBC junior welterweight title in 2008. Cherry also lost on points to Paulie Malignaggi in 2007.

Cherry, who has never been stopped, beat Robert Osiobe, of Las Vegas, NV, earlier this year in Philadelphia.

“This is a solid match between two of the best in the world between 130 and 135,” said Hall-of-Fame promoter J Russell Peltz, who handles Cherry. “It’s nice to see fights like this at this level. No one gets a free pass and it’s on neutral ground–neither guy is from Philadelphia.”

Cherry: “I want to thank Russell Peltz and Main Events for this opportunity. I’m ready and hungry and I guarantee the fans are going to get an exciting fight, for as long as it lasts. I will show the world that I am the best 130 pound fighter in the world.”

Belmontes, 25, who lost a disputed 12-round split decision to Omar Figueroa, of Welasco, TX, for the WBC lightweight title earlier this year, is 19-5, 5 KOs. He followed that with another split-decision loss, this one over 10 rounds against Abner Cotto, of Caguas, Puerto Rico.

Belmontes earned his title shot early in 2014 when he out-pointed previously unbeaten Will Tomlinson, of Australia, at the MGM in Las Vegas. He also has beaten Daniel Diaz, of Nicaragua.

“This is a huge opportunity for Jerry,” said manager Adrian Clark. “He loves Kathy [Duva], Jolene [Mizzone] and everyone at Main Events and he is excited to work with them again. He is looking to redeem himself after the loss to Cotto by beating Edner Cherry and getting back in the hunt and hopefully soon fighting for a 135 pound crown.”

“Once again our matchmakers, Jolene Mizzone and Russell Peltz, have come up with a pair of intriguing cross-roads fights to entertain the Fight Night fans,” said Kathy Duva, CEO of Main Events. “Steve Cunningham is always in a great scrap and the undefeated Visinia is determined to make a statement. Meanwhile, the battle between Cherry and Belmontes promises a lot of action from two fighters who need to win in order to advance their careers.”