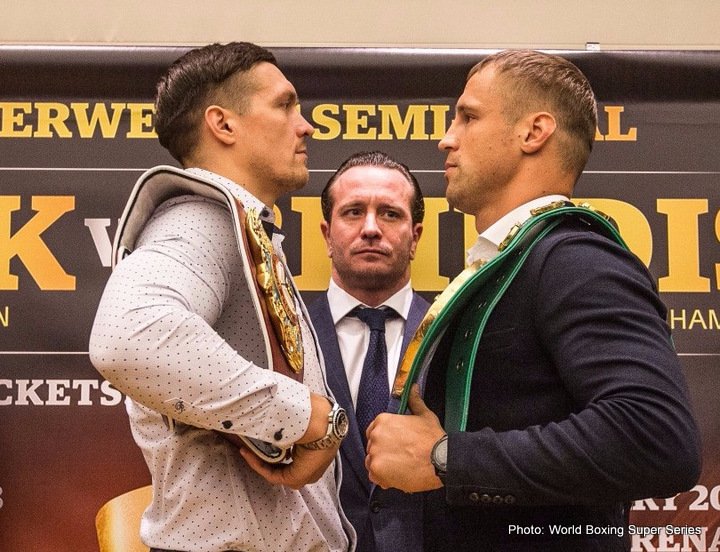 Micki Nielsen (24-1, 15 KOs) faces Ricards Bolotniks (10-3-1, 4 KOs) in an eight-round contest on the undercard of The Ali Trophy semi-final showdown between Aleksandr Usyk and Mairis Briedis at the Riga Arena in Latvia on January 27.

The Danish cruiserweight returns to the ring following a seventh-round knockout win over Taras Oleksiyenko in Schwerin, and will be looking for his third consecutive victory against the 27 year-old Bolotniks from Riga.

Prior to this fight, Nielsen has spent two weeks in Spain sparring with WBC World Champion Briedis in preparation for the Latvian’s crunch clash with WBO World ruler Usyk.

“I’m looking forward to getting back in the ring,” says the 24 year-old Nielsen. “I’m in great shape and I can only see myself as winner of this fight.

“I have sparred for 14 days with Mairis Briedis in Spain, and you can feel that he’s in top shape and ready for 12 hard rounds against Aleksandr Usyk. He is a skilled boxer, and also very fast, so it has been tough sparring but also a great learning experience.

“Aleksandr Usyk might be the favourite in the fight, but if there is anyone who has a chance to beat him, it’s Mairis Briedis.”

Kongolo and Scandi stars Nielsen and Wallin on Usyk-Briedis undercard – The undercard for the Ali Trophy semi-final in Riga on January 27 between Aleksandr Usyk and Mairis Briedis features both established and rising stars.

The former WBC International Cruiserweight champion, Micki Nielsen (24-1, 15 KOs) from Denmark will take on Latvia’s Ricards Bolotniks (10-3-1, 4 KOs) in an 8-round contest. Nielsen has been sparring with Mairis Briedis in preparation for this bout, and the Danish star hopes to upset the hometown fans and make it three wins in a row.

Undefeated Latvian, Jevgenijs Aleksejevs (7-0, 6 KOs), has made a very impressive start to his professional career so far. But there is no doubt that he faces his toughest test so far in Maurice Possiti (17-12, 7 KOs) from France.

Latvia’s Nikolajs Grisunins (6-0-1, 3 KOs) will aim to return to winning ways when he faces the dangerous big punching Jozsef Darmos (8-1-2, 7 KOs) from Hungary.

Araik Marutjan (1-0), who represented Germany in the 2016 Olympics takes on the very tough Hungarian Richard Hegyi (4-2, 3 KOs) in a Middleweight contest.

The undercard also features the talented cruiserweight Mikael Lawal (4-0, 3 KOs) from London, United Kingdom, who has been sparring Aleksandr Usyk in preparation for this bout. He takes on the experienced southpaw Istvan Orsos (16-43-2, 5 KOs) from Hungary.

Croatian heavyweight sensation Filip Hrgovic (2-0, 2 KOs) returns to Riga and to the World Boxing Super Series with an eight-round contest against Britain’s Tom Little (10-4, 3 KOs) on the undercard of The Ali Trophy semi-final clash between Aleksandr Usyk and Mairis Briedis on January 27 at the Riga Arena in Latvia.

The 2016 Olympic bronze medallist returns to happy hunting ground having started his professional career with the first-round KO of Raphael Zumbano Love at the Riga Arena. The 27-year-old followed this up with a second win in Schwerin stopping the previously undefeated Pavel Sour inside the first stanza.

“I’m looking forward to fighting in Riga again,” says Hrgovic. “It’s a great city and a great event. I’m happy to come back here after a successful pro debut in Riga.”

“I’ve been preparing for this fight like it is a World title. I’ve been training and sparring very hard, and I’ll be 100% ready on fight night. My opponent Tom Little seems to be very confident. But whatever he brings, I’m ready for it.”

“I think it will be another 1st round stoppage victory, but I’ll be ready to go the 8-round distance if I need to. If I perform like I know I can, he doesn’t have a chance.”

Little, from Hatfield, England, is on a three-fight win streak, and confident of upsetting the odds and handing Hrgovic his first professional defeat.

“I’ve been waiting years for a chance like this, and I’m over the moon that I’ve finally been given an opportunity on such a massive show,” said Little. “Filip is a big strong boy, but this fight is way too early for him and I’ve seen a few things I can take advantage of. The fight won’t see the 8th round. I’ll bash his face in!”

Swedish heavyweight Otto Wallin (18-0, 12 KOs) is back in action on January 27 fighting on the undercard of the World Boxing Super Series semi-final between cruiserweight world champions Aleksandr Usyk and Mairis Briedis in Riga.

The undefeated 27 year-old returns to the ring for the first time since claiming the WBA Continental title against Gianluca Mandras in April, and will meet Bosnia And Herzegovina’s Srdan Govedarica (6-5, 5 KOs) over eight-rounds.

With a massive EU title fight in the making, Wallin knows he cannot afford any mistakes if he is to land a dream fight with domestic rival Adrian Granat.

“It’s been a long time since my last fight,” says Wallin. “I’ve had some bad luck with injuries and a show being cancelled so I’m really looking forward to fighting again. I’ve used my time out of the ring to really work on my boxing. I’ve been in the gym everyday and I can really feel the improvements I’ve made.

“I’m excited to be boxing on such a big show. I’m a big fan of Usyk and Briedis so I’m looking forward to seeing that fight but first I have to take care of my business and win my fight. My opponent is a big guy and I’m sure he’s tough so it’s going to be a good experience for me to get in there with him.

“I have a big fight coming up against Adrian Granat so I have stay focused and alert at all times. I can’t look past this guy. I need a win to secure the Granat fight so this is a very important fight for me.”

“Briedis is a good fighter, but the only thing he has that I want is his belt,” said Usyk. “I am looking forward to fighting in Riga, it’s going to be a great event. I am sure there will be a lot of people coming from Ukraine to support me. People can look forward to an entertaining fight between two world champions both eager to qualify for the final and win the Muhammad Ali Trophy.”

Said Mairis Briedis: “It is one of my dreams as a fighter to be part of one of the greatest fights of all time. I hope this fight will be a Hall of Fame fight. It has all the ingredients to become a classic.”

“Usyk was excellent as an amateur and he has been great as a professional, so it will be a tough challenge, but I believe that I have what it takes to beat him.”

“It is lovely to be in Riga,” said Comosa’s Chief Boxing Officer Kalle Sauerland. “This fight will be the biggest sports event ever on Latvian soil. We have to world champions, two amazing contenders, two sensational athletes. Briedis, the national hero of Latvia, the WBC Champion vs. Usyk, an Olympic Champion and World Champion. So the stage is set for a night full of drama.”

This biggest cruiserweight unification fight for several years takes place at the Arena Riga. The same place where Mairis Briedis booked his place in the semi-final by outpointing Mike Perez in front of a sold-out crowd of 10.000 fans.

His Ukrainian opponent went to Berlin in in the tournament opener and produced a spectacular display at the Max-Schmeling-Arena to stop former world champion Marco Huck in the 10th round.

Tickets for Usyk vs. Briedis, a semi-final in the cruiserweight division of the World Boxing Super Series, are on sale via bilesuserviss.lv 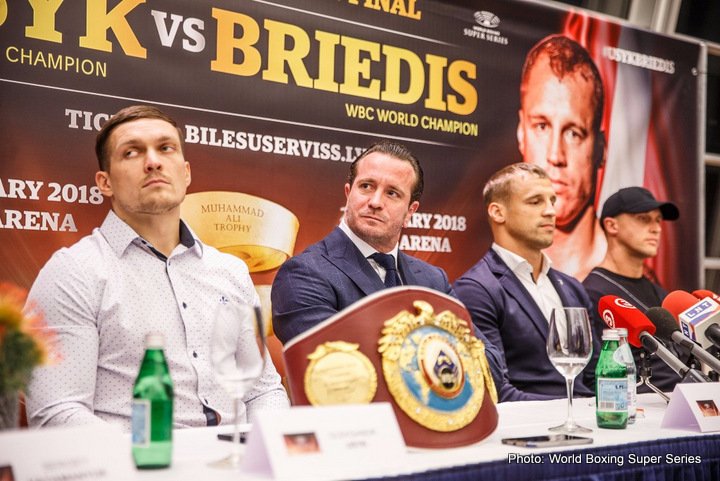 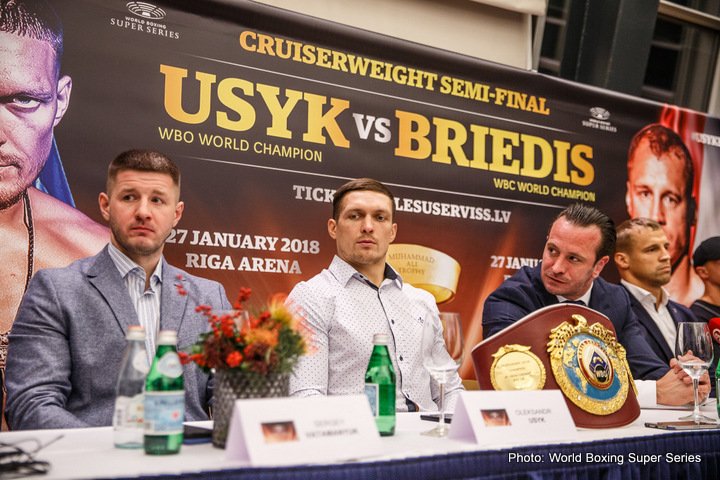