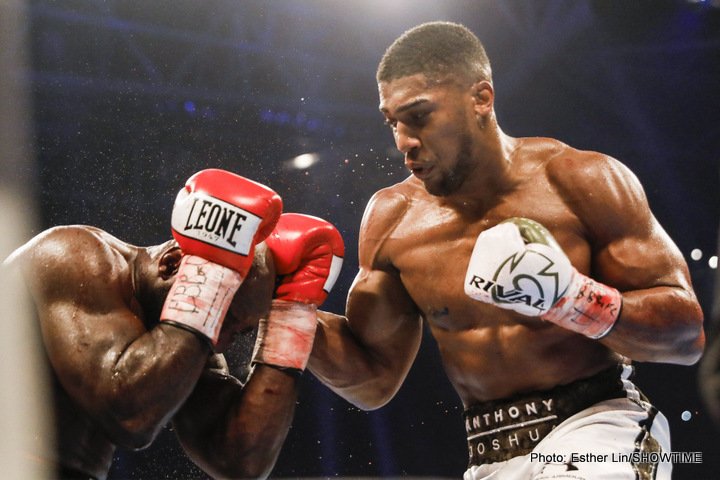 With Eddie Hearn claiming that a fight between Anthony Joshua and Deontay Wilder is a certainty in 2018, the excitement is building for a meeting between the American WBC Heavyweight champion and the man he branded a “little girl” this week.

Paddy Power are now offering odds of 5/2 for Wilder to be the Brit’s next opponent and with a football World Cup to come in Russia, punters might be looking forward to a bumper summer. The favoured months for the fight are June, July and August (all 4/1).

But they can also get odds of 8/1 on Hearn not keeping his word and the fight taking place no earlier than 2019.

AJ is favourite with the bookies, priced at 2/9 to win the potential fight and a Joshua KO is the favoured method of victory (4/9).

However, the Brit is actually most hotly tipped to face Alexander Povetkin (who had his lifetime ban lifted by the WBC yesterday) next, with odds of 2/1, and another heavyweight hoping to make a return, Tyson Fury, is priced at 33/1 to jump to the front of the queue to face Joshua.

And with all the excitement around the WBA and IBO Heavyweight champion, he is also favourite for this year’s BBC Sports Personality of the Year award (2/9), ahead of Lewis Hamilton and Chris Froome.

Spokesperson Paddy Power commented, “Boxing fans haven’t been this excited since the last time AJ stepped into the ring. Wilder may think Joshua is a ‘little girl’, but he’s got to be the scariest little girl I’ve ever seen.

“If he can get past the American, who knows how far AJ could go. His future is brighter than Michael Buffer’s teeth.”