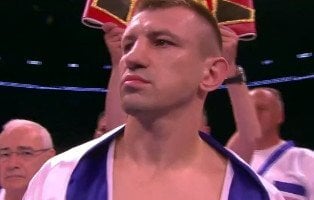 In an important undercard fight, former IBF cruiserweight champion Steve Cunningham (25-4, 12 KO’s) bested journeyman Jason Gavern (21-11-4, 18 KO’s) by a 10 round unanimous decision. The judges scores were 100-90, 100-90 and 99-90. Cunningham looked good in his first fight at heavyweight, hitting Gavern at will with nice combinations and connecting with a lot of hard jabs to the head. It was a good fight. The only problem that I could see from Cunningham is that he looks too light to compete against the better heavyweights in the division. He was little more than 210 pounds for the fight and that’s just too light to beat any of the bigger heavyweights in the division given that Cunningham really isn’t a big puncher at this weight. Gavern was someone that he needed to knockout to prove that he belongs in this weight class and he couldn’t do it.

In a total blowout, unbeaten heavyweight prospect Bryant Jennings (15-0, 6 KO’s) destroyed Chris Koval (25-10, 18 KO’s) by a 1st round knockout after knocking him down twice in the fight.

In results on the card: