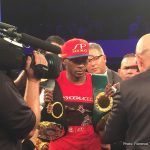 Friday, January 13, 2017, WBA Super Welterweight Champion Erislandy Lara (24-2-2, 14 KOs) retained his title by knocking out Yuri Foreman (34-3-0, 10 KOs) in the fourth round of a scheduled twelve-round bout at the Hialeah Park Casino in Hialeah, FL.

The champion, Lara, is a Cuban-born fighter who resides in Houston, Texas. A Cuban expatriate, he has built an incredible career in professional boxing in the United States, earning him the handle “The American Dream.” Lara proudly wears this name across the waistband of his trunks. After losing to Saul “Canelo” Alvarez in a highly-contested split decision in 2014, Lara has won all of his last five bouts. 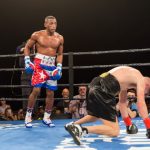 Super welterweight world champion Erislandy Lara (24-2-2, 14 KOs) continued his reign as one of the top 154-pounders in the world and delivered a sensational knockout of former world champion Yuri Foreman (34-3, 10 KOs) in the main event of Premier Boxing Champions on Spike Friday night from Hialeah Park Racing and Casino in Miami

In front of a huge Cuban audience, Lara needed just a single left uppercut to drop and stop Foreman at 1:47 of round four. Foreman was also down in round three from a questionable knockdown that could have been ruled a slip. 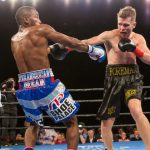 WBA junior middleweight champion Erislandy Lara (24-2-2, 14 KOs) beat challenger Yuri Foreman (34-3, 10 KOs) by a 4th round TKO tonight at the Hialeah Park Racing and Casino in Miami, Florida. The fight ended with Lara flattening Foreman with a left to the head in the 4th. The fight was stopped at 1:47 of round 4.

Foreman was also knocked down in round 3. That was a beautiful right-leg trip that Lara did, which the referrer never saw. He still called it a knockdown despite no punch landing. Foreman clued the referee in that he blew the call afterwards, but it was too late. The knockdown still counted. 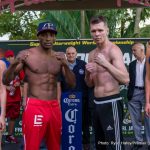 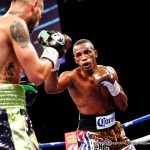 Featured on the card, in separate bouts, will be former world champions Richar Abril and Yuri Foreman. Abril (19-3-1, 8KO’s), making his much anticipated return and DiBella Entertainment (DBE) debut, will take on the always-tough Jerry Belmontes (21-8, 6KO’s) in a 10-round junior welterweight showdown. Foreman (33-2, 9KO’s), fighting for the first time in 2016, is set to take on Jason Davis, of Vancouver, WA, in an eight-round junior middleweight matchup. 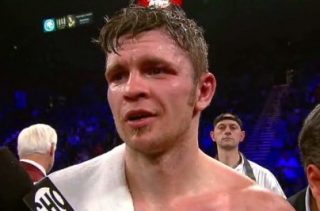 BROOKLYN (October 29, 2015) – Former world champion and Brooklyn-native Yuri Foreman (32-2, 9 KOs) will return to the ring for the first time since 2013 as part of a stacked undercard featuring a diverse group of fighters from across the boroughs and regions of New York on Saturday, December 5 at Barclays Center in Brooklyn.