Chris Aston, trainer and father of Tyrone Nurse, says there is still more to come from the former British Light Middleweight Champion.

Now signed with … read more “Tyrone Nurse Not Finished Yet”

Promoter Steve Wood has pulled a terrific headliner out of the bag for his November 17, Victoria Warehouse show, with Middleton’s Liam Taylor facing Huddersfield’s … read more “Taylor Vs Nurse Live And Free On Vipboxing.tv” 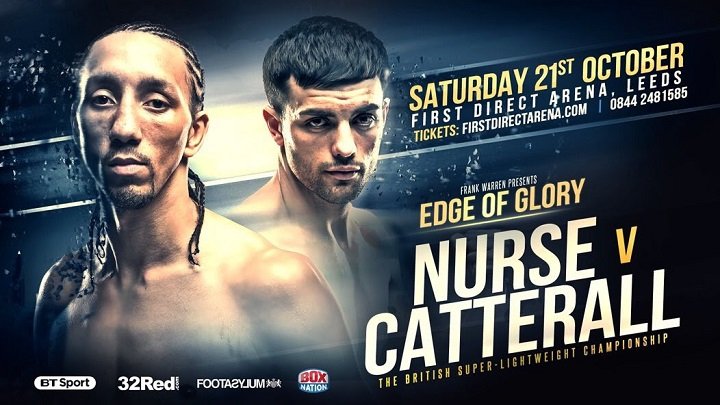 Undefeated Jack Catterall takes on Tyrone Nurse next Saturday for the British Super-Lightweight title, and he’s already displaying extreme confidence in his abilities.

Long standing British Super-Lightweight king Tyrone Nurse believes that 2017 will be the year that elevates him from a champion into a star, writes Glynn Evans.

After nine months away, the 27 year old Huddersfield skilster finally gets to debut for new promoter Frank Warren – and before BT Sport and BoxNation TV cameras – when he defends for the third time against Malmesbury toughman Joe Hughes on a talent stacked bill at Leicester Arena on Saturday week.

Huddersfield slickster and British Super Lightweight champion Tyrone Nurse is delighted to have signed a long term promotional deal with Hall of Fame boxing promoter Frank Warren. The 26-year-old Yorkshire ace joins with an impressive record of 34-2-1 and is looking forward to what opportunities 2017 will bring.

Tommy Coyle says he will make history in by becoming the first British champion from Hull when he challenges Tyrone Nurse for the Super-Lightweight title at the First Direct Arena in Leeds on July 30, live on Sky Sports.

Coyle clash with old amateur foe Nurse is his second fight at 140lbs having made the move from Lightweight in May over six rounds in Manchester.

Tyrone Nurse has told Willie Limond to forget about a World title fight with Ricky Burns as he plots a path to land the British Super-Lightweight title outright, starting with his first defence at the SSE Hydro in Glasgow tomorrow night, live on Sky Sports.

Tyrone Nurse says he won the first meeting with Chris Jenkins for the vacant British Super-Lightweight title – and will leave the result in no doubt when they meet again on Saturday at the Manchester Arena live on Sky Sports.

Tyrone Nurse says winning the British Welterweight title against Chris Jenkins on July 18 at the Manchester Arena live on Sky Sports would be a dream come true – and believes it would set up the rematch he craves against Dave Ryan.

Chris Jenkins is ready to put ‘the hardest period as a pro’ behind him and claim the vacant British Light Welterweight title at the Manchester Arena on July 18, live on Sky Sports.