Mashantucket, CT: NBC Sports Group’s Fight Night presents its first afternoon broadcast of the year on NBC this Saturday, September 20th, at 3 p.m. ET. The fourth afternoon network boxing broadcast since the Fight Night series premiered in 2012, the show will feature a pair of spectacular bouts with four of the sport’s hottest prospects.

New York City, NY: Thabiso “The Rock” Mchunu (16-1, 11 KOs), the 26 year old southpaw from South Africa, grew up watching his father, also a boxer, in the gym. Wanting to be just like Dad, Thabiso literally mirrored his father’s moves, leaving the right-handed would-be-boxer with a lefty’s stance. By the time Thabiso started boxing at eight years old, the southpaw style had stuck – it was too late to make the adjustment back to an orthodox stance. “I watched him hit the bag and then I started doing my shadow boxing,” explained Mchunu, “I am actually right-handed, but only in boxing am I a lefty because of how I started boxing. Then I just stayed as a lefty. By the time they started to teach me to be a righty, it was too late and they said I must stay a lefty. I think I did the right thing because I love being a southpaw.”

Thabiso “The Rock” Mchunu (16-1, 11 KOs) is a top counter-punching cruiserweight and, on Sept. 20 at Foxwoods Resort Casino, he is facing an opponent in Garrett “The Ultimate Warrior” Wilson (13-7-1, 7 KOs) with a fierce, aggressive offense. Watch out for fireworks when aggression and defense collide in the ring live on NBC Fight Night. Below is the scouting report for this much anticipated battle:

Tickets are on sale now for the NABF Cruiserweight Title fight between Thabiso “The Rock” Mchunu (16-1, 11 KOs) and Garrett “The Ultimate Warrior” Wilson (13-7-1, 7 KOs) September 20, 2014 at Foxwoods Resort Casino. The fight will be broadcast as the main event on a special afternoon edition of NBC Fight Night at 3:00 PM ET/12:00 PM PT. Tickets are on sale now through Foxwoods.com and will go on sale Friday through Ticketmaster.com. Ticket prices are $100, $75 and $40. Doors open at 12:00 PM.

Thabiso “The Rock” Mchunu (16-1, 11 KOs), the South African cruiserweight who burst onto the scene last August with an upset over “Fast” Eddie Chambers at Mohegan Sun returns to Connecticut to defend his NABF Cruiserweight Title against Garrett “The Ultimate Warrior” Wilson as the main event on a special broadcast NBC afternoon edition of Fight Night on Sep. 20 live from Foxwoods Resort Casino. 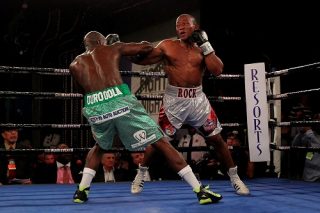 The young Mchunu, 26, of KwaZulu-Natal, South Africa, made his US debut Aug. 3, 2013 at Mohegan Sun in Uncasville, CT with a stunning unanimous decision upset of former heavyweight contender “Fast” Eddie Chambers. He then went on to defeat Olanrewaju “God’s Power” Durodola on Jan. 24, 2014 on NBCSN Fight Night in Atlantic City, NJ. This will be his first fight back in his home country since signing with Main Events last year. The popular nationally televised live boxing series, Fight Night, begins the new year with a bang on Friday, January 24th with an explosive double header from Resorts International Hotel Casino in Atlantic City. Topping the card, which will be telecast on NBC Sports Network Fight Night beginning at 10PM ET, is a 10-round middleweight contest between hard-hitting contender Curtis Stevens, 25-4, 18 KOs, and the iron-jawed Patrick Majewski, 21-2, 13 KOs.

“Showtime” Stevens, Brooklyn, NY, is coming off a gallant challenge of 160-pound champ Gennady Golovkin, and is eager to battle his way back to another title try. Stevens is known for his devastating punching power, and has scored quickies against seasoned Saul Roman, warrior Elvin Ayala, then-undefeated Piotr Wilczewski and many others. This time out, Stevens will learn if his fists can crack the granite in Majewski’s chin. TOTOWA, NJ – Main Events announced today that they have signed up-and-coming cruiserweight sensation Thabiso Mchunu, 14-1, 10 KOs, to an exclusive promotional contract. The southpaw from South Africa made his American debut on August 3rd with a surprise 10-round unanimous decision over Eddie Chambers, 36-4, 18 KOs, at the Mohegan Sun Casino in Uncasville, CT, in a bout that was nationally televised by NBC Sports Network. Mchunu’s performance in the fight served as a terrific introduction and made it clear that his impressive record and collection of African titles were no fluke.